END_OF_DOCUMENT_TOKEN_TO_BE_REPLACED

LAST we noted that the 2016 bull market in gold and gold stocks had gone off course, writes Jordan Roy-Byrne at The Daily Gold.

It had moved too far out of the historical boundaries to remain a bull market. There was also other evidence of such including but not limited to rising real yields. Gold's last hope was to hold $1200-$1210 and rebound back to the highs. 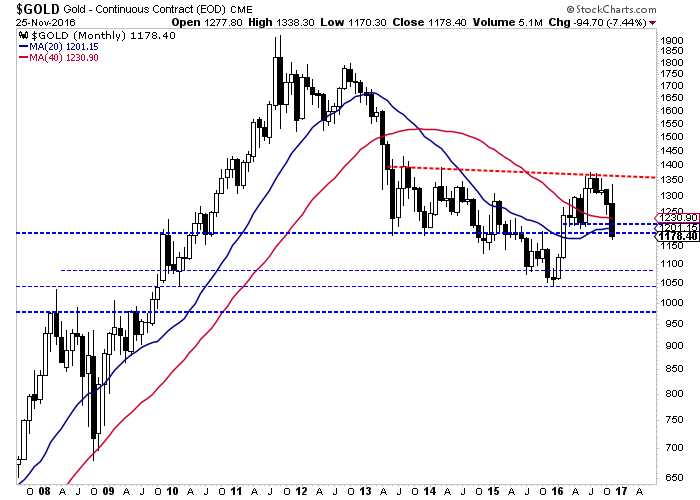 The 40-month moving average has been an excellent primary trend indicator throughout gold's modern trading history. There is a little support at $1150 but nothing standing in the way of gold heading for a retest of its low at $1050.

Gold is not only weak in nominal terms or US Dollar terms but it is showing weakness in real terms. Below we plot gold against foreign currencies (the US Dollar basket) and against the NYSE, a broad equity index. 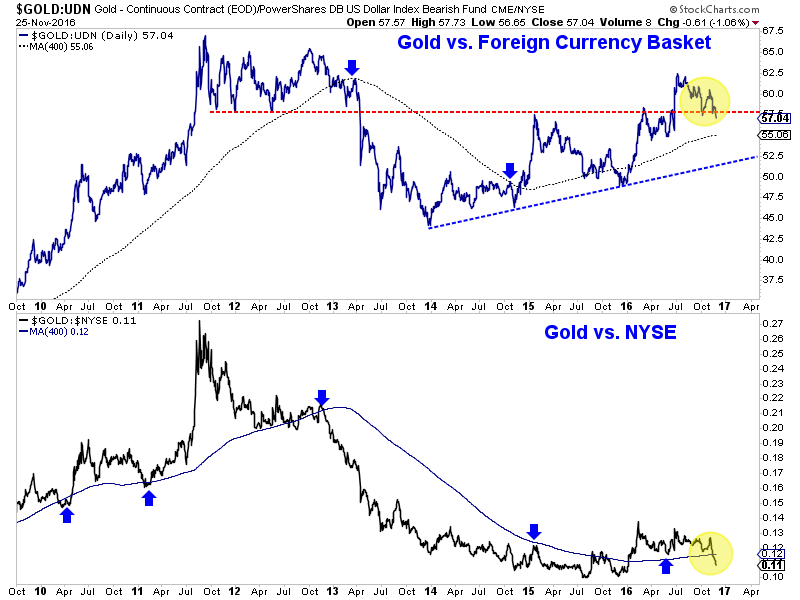 Gold/FC has been strong for several years but it has lost support and looks headed lower. Meanwhile, Gold/NYSE lost support at its 400-day moving average and could retest its 2015 low.

Gold is clearly broken but its decline is due for a pause. Gold has been strongly correlated to the bond market which may have made an interim low last Wednesday. Also, the gold stocks are showing a positive divergence.

Even as gold lost $1200 per ounce and traded down to $1171 per ounce, the gold stocks (GDX, GDXJ) did not make a new low. Furthermore, the market has now fully priced in a quarter point rate hike from the Fed in December.

The odds favor a rebound in the days and potentially weeks ahead. Traders and investors should use the rebound to de-risk their portfolios, raise cash and hedge if the opportunity presents itself.

But don't think about buying until we see sub-$1080 gold and an extreme oversold condition coupled with uber bearish sentiment.