END_OF_DOCUMENT_TOKEN_TO_BE_REPLACED

A FEW WEEKS AGO here at The Daily Reckoning Australia, we speculated that Germany might be an earlier victim of the sovereign debt crisis because its various banks and financial institutions own a lot of Spanish and Portuguese debt, writes Dan Denning in St.Kilda, Melbourne.

Credit default swaps were blowing out faster on German debt than other sovereign nations in which deficits and debt were bigger. But this was really a question of where risk resides in the credit system at the moment. And the market is pointing somewhere in the middle of Europe.

So if you were a speculator, or merely wishing to hedge your position in German financial stocks, you'd buy credit default swap insurance. It seems like a sensible thing to do, although apparently you can't do it anymore.

"The Euro slid to its least since April 2006," reports Bloomberg, "after Germany prohibited naked short-selling and speculating on European government bonds with credit-default swaps and the Bank of Italy allowed lenders to exclude losses on government debt."

Hmmn. Is this like not being able to buy health insurance if you have a pre-existing condition?

Investors unable to hedge their risk may have to sell. Or, short-sellers will have to cover, which means you could get a brief rally in European shares, the Euro, and Euro bonds. But it's hardly the sort of thing to boost confidence. Another Bloomberg article elaborates:

The key words here are "naked" and "politicians". Naked short selling, unlike the covered kind, is selling a security you don't own instead of borrowing it first and then selling it. There's a healthy debate about whether you can or should be able to sell something you don't own or that isn't owned by anyone. Why speculators are doing it is obvious. Whether they should be able to do it is less obvious.

But that it's a good investment idea...well that is another matter entirely. And politicians who are blaming Euro bond weakness on short sellers are looking for a villain that is not them. It's a confusion of cause and effect, like blaming the buzzards for the death of the corpse. It does buy them time though, in the blame game.

Banning short selling does not improve the quality of sovereign debt or sovereign finances in Europe. And by the way, we've been copping it from European subscribers lately who feel aggrieved. They point out that there are other even more serious debt problems in the UK and the USA. And in terms of flawed currencies, what about the greenback and the pound?

Correct you are, aggrieved Europeans! The Dollar's day of reckoning will come too. But in the mean time, US bonds and the greenback are enjoying the "flight-to-something-else" bid. We wouldn't call it a flight to safety, mind you. But it does explain the chart below, which shows the Gold Price in both US and Australian Dollars.

Note the price rising in both currencies. And note that the Aussie Gold Price appears to move up as global investors flee risk (emerging markets and leveraged commodity plays). The greenback Gold Price is climbing too, but less fast. 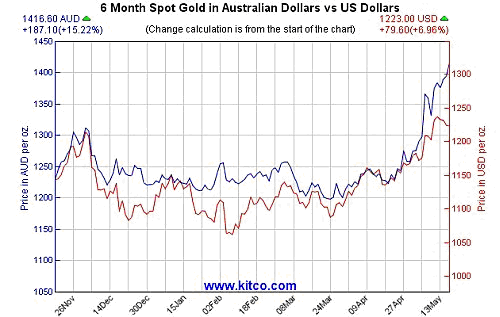 Meanwhile, will the centralized slap-down on markets in Europe work? The authorities are trying to protect vulnerable institutions by preventing short sellers and speculators from attacking them. And the Bank of Italy's decision to exclude losses on government debt from capital adequacy considerations is nothing less than inspired. It could start a trend.

It's not a loss if you don't count it!

More seriously, why institute the ban on naked short selling now? And why take the extra step of preventing anyone in the market from going short government bonds? To be charitable, you could assume that the asset price falls (especially in government bonds) are the work of evil speculators (the global wolf pack) who are unfairly damaging and destroying confidence in otherwise credit-worthy securities and sound government fiscal policies (cough).

But more likely, if asset values on bank balance sheets are falling (principally government bonds) then it could again trigger the whole deleveraging vicious cycle we saw in 2008 where institutions are forced to sell some assets to cover losses on other assets or loans. You get a whole lot of selling and much lower prices, which is of course exactly what needs to happen.

Some in Europe are saying another EU aid package is "inevitably going to come" and that the Euro's decline is "unstoppabl.." Those are the words of former Bank of England policy maker David G. Blanchflower on Bloomberg Television.

"What we really have to think about," he said, "are rescuing the banks, dealing with this credit crisis, giving confidence back to the Euro area, which they've not done...And let's think about how we can organize the next rescue package, which inevitably is going to come."

Meanwhile, back on the resource ranch, the more we think about the Resource Rent Tax, the more obvious it is that it's a back-door nationalization of the mining industry through the tax code. Without asking permission from the miners or the Australian people - and based on the idea that the government owns Australia's resources even if private capital develops them – the government has made itself a partner in the profits and losses of Australia's miners.

You can understand, why, when times are good, you'd want to participate in profits - especially if you didn't have to take any of the risk (as is the case with imposing the tax on existing projects whose risks and costs were born by private investors). It reminds us of what John Dillinger said when he was asked why he robbed banks.

"Because that's where the money is."

But has anyone bothered to ask if the Australian people should or want to be responsible for 40% of the losses born by miners? Is that good public policy? What are the long-term consequences? Can anyone know?

That Australians would indirectly be on the hook for losses born by the mining industry is the case, as far as we understand the new proposal. Or, put another way, it's a subsidy to marginal projects and inefficient producers. In a market system, private capital takes risks and bears the losses and gains from those risks. Investors consent to put their own capital at risk in explorers and that is that.

But now the government is essentially agreeing to put your tax money at risk in the mining business. It raises the possibility that the resource tax going to increase the inefficiency of capital spending in the resource sector at the same it may decrease total investment by the private sector.

If both those things happen, the Rudd tax would distinguish itself in the annals of government policy as being doubly bad. That's quite an achievement. But really, do we want the same people who gave us the pink bats and BER programs to now get stuck into the mining industry?

Economically, this puts the government on the hook for bad investments in the mining sector in the future, and in perpetuity. When you're a partner, it's for better or for worse. For richer AND for poorer. If you really thought about it, you might have second thoughts about whether making all Australians compulsory partners in the mining business was such a good idea. But that would only occur to you if you were thinking. It's not just a question of coercion. It's a question of economic prudence.

Right now, the government is hardly thinking about future bad investments. It's thinking about billions in new tax money it can redistribute to achieve whatever ambition of the day it has for the Australian economy. But at what could be the top of this leg of the commodity cycle, those billions may never materialize.

Buy Gold on $3 spreads and store it – securely – in Zurich, Switzerland for $4 per month by using BullionVault...