END_OF_DOCUMENT_TOKEN_TO_BE_REPLACED

France is not Greece. It clearly isn't Germany, either...

YIELDS on French government bonds are soaring. That's what the French might call "mauvaises nouvelles." In fact, that's what we might all call "bad news", writes Eric Fry for the Daily Reckoning.

It's one thing when chronic deadbeats like Greece and Portugal struggle to make ends meet. But it is something completely different when the economic pillars of the European economy start showing some cracks.

In European trading yesterday, the 10-year French government bond yields hit 3.71%, compared to 2.44% about two months ago. The rapid rise in rates is not that alarming...until you examine it in the context of German bond yields. Take a look at the chart below, which shows the difference (or spread) between French and German bond yields since the launch of the Euro. 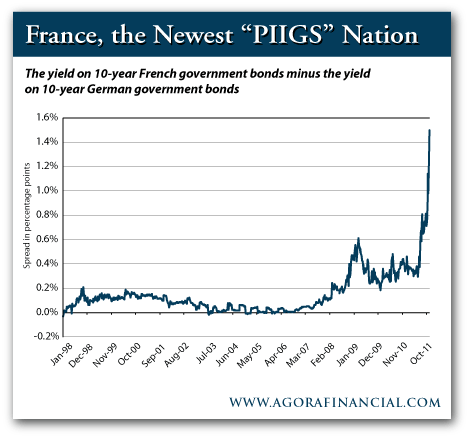 After the credit crisis of 2008, French bond yields moved slightly higher than German yields, but not dramatically so. More recently, as investors have been dumping the bonds issued by Greece, Portugal, Italy and other "questionable" sovereign issuers, they have been flocking into both French and German bonds as a "flight-to-safety" trade.

But look what has happened during the last few weeks. French bond spreads have "blown out," as the traders would say. Apparently, bond investors are beginning to distrust French debt as a "slight-to-safety" asset, at least relative to German debt. So investors have been selling French government bonds very aggressively for the last several weeks, while continuing to buy German government bonds.

As a result, French yields are soaring while German yields are falling, causing the spread between the two to skyrocket to a Euro-era record high. The chart below shows the spread between 10-year French bonds and 10-year government bonds to be 1.50%. But that number is already out of date. Today the spread is 1.90%...and widening.

So why should we care about all this? Because France is not Greece.

Greece has the dubious distinction of spending more of its modern history in default or debt-restructuring than any other Euro zone nation, according to the fascinating research of Reinhart & Rogoff. Since gaining its independence 182 years ago, Greece has spent 94 of those years in default or restructuring. Spain is a distant second on the list, having spent only 24% of the last two centuries in default. Then comes Austria at 17% and Germany at 13%.

France has never defaulted during the last 200 years...at least not entirely. It did default on its WWI debts to the US. (So let's put an asterisk next to that one). But in terms of across-the-board sovereign defaults, France has one of the cleanest 200-year records on the European continent.

But that was then and this is now. In this present moment in history, the French governments lightly blemished credit history matters little. What matters a lot is that French banks are holding hundreds of billions of Euros worth of Greek, Portuguese, Spanish and Italian sovereign debt — the very stuff that is plummeting in value. 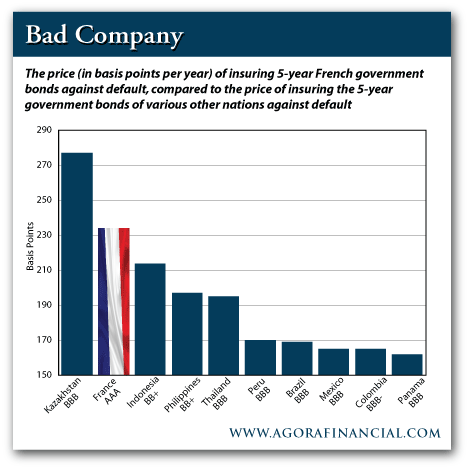 Thus, the chart above is somewhat shocking. It presents the price of insuring various government bonds against default. (This insurance is called a credit default swap, or CDS). The higher the bar on the chart, the more expensive the insurance. And there's only one reason why the price of any kind of insurance rises: The underwriter believes the likelihood of a claim has increased.

The owners of French government debt can still take some comfort from the fact that French CDS prices are not as high as Kazakhstan CDS prices. But the gap is narrowing.

The steep upward trajectory of French bond prices is signaling a new phase of the Euro crisis — a phase that may drive multiple sovereign borrowers into default and may claim the life of at least one major Western currency.

Looking to put some money into Gold Bullion?...