END_OF_DOCUMENT_TOKEN_TO_BE_REPLACED

Nearly 46 million Americans are now on food stamps – and the numbers are growing...

Nearly 46 million Americans are now taking food stamps, and the growing numbers advanced at 8.1% over just the past year.

Because so many of these are children, I was quite interested in a recent study out just last week from the Bertelsmann Foundation. Looking at overall economic conditions among just OECD members, here is their ranking of child poverty among the developed nations of the world (see: Social Justice in the OECD – How Do Member States Compare?). 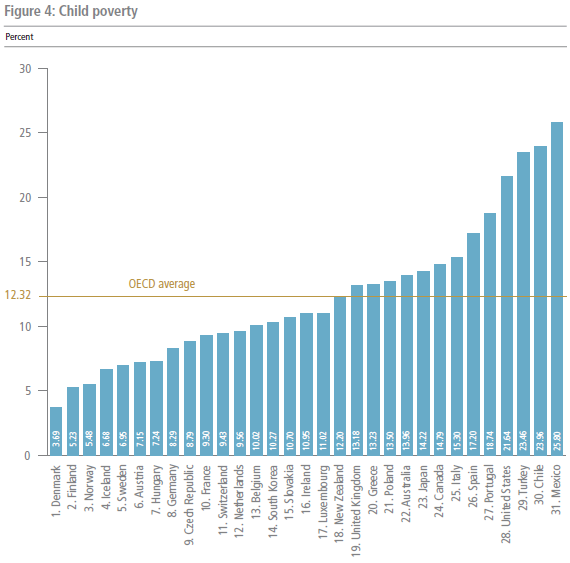 That the United States currently ranks near the bottom of OECD member states (28 out of 31) is frankly no surprise. Inequality in the US has been growing for years but has accelerated post the 2008 crisis. Most usually, I try to tie such conditions to the rapid rise in energy costs that have befallen the United States over the past decade. However, while the production of food globally is inextricably linked to energy, I think there is frankly more of an issue of policy and investment that has driven the USA, with its still very high per capita income, to such shameful levels in child poverty rankings. In this regard, a quote from David Graeber writing about the Occupy Wall Street Movement in The Guardian caught my eye:

When the history is finally written, though, it's likely all of this tumult – beginning with the Arab Spring – will be remembered as the opening salvo in a wave of negotiations over the dissolution of the American Empire.

The likelihood that maintenance of the US Empire is no longer to the advantage of Americans is an issue I began to raise in 2010, while doing my Sunday night macro show on StockTwits.tv. The extraordinary resources the US devotes to its global military presence is a kind of economic proposition, supposedly conferring an array of benefits to the domestic economy from security to free trade.

However, that the country now has a problem feeding itself is a clear rebuttal to such a thesis. How long, at current growth rates, before a full 15% of America is on food stamps? Indeed, Washington, with its self-absorbed focus on the its global apparatus, would do well to think about economic security here at home.