END_OF_DOCUMENT_TOKEN_TO_BE_REPLACED

In truth, the global squeeze on agricultural supplies never went away...

EACH AND EVERY month, J.P.Morgan Chase dispatches a researcher to several supermarkets in Virginia, writes Addison Wiggin in The Daily Reckoning.

The task? To compare the prices of 31 items.

In July, the firm's personal shopper came back with a stunning report: Wal-Mart had raised its prices 5.8% during the previous month. More significantly, its prices were approaching the levels of competing stores run by Kroger and Safeway.

The "low-price leader" still holds its title, but by a noticeably slimmer margin. And within this tale lie several lessons you can put to work to make money.

It's best to get started soon...because if you think your grocery bill is already high, you ain't seen nothing yet. In fact, we could be just one supply shock away from a full-blown food crisis that would make the price spikes of 2008 look like a happy memory.

Fact is; the food crisis of 2008 never really went away. True, food riots didn't break out in poor countries during 2009. Warehouse stores like Costco didn't ration 20-pound bags of rice...but supply remained tight. Prices for basic foodstuffs like corn and wheat remain below their 2008 highs today. But they're a lot higher than they were before "the food crisis of 2008" took hold.

Here's what's happened to some key farm commodities so far in 2010...

What was a slow and steady increase much of the year has gone into overdrive since late summer. Blame it on two factors...

America's been blessed with year after year of "record harvests," depending on how you measure it. So when crisis hits elsewhere in the world, the burden of keeping the world fed falls on America's shoulders.

According to Soren Schroder, CEO of the food conglomerate Bunge North America, US grain production has filled critical gaps in world supply three times in the last five years, including this summer...

So what happens when those "record harvests" no longer materialize?

In September, the US Department of Agriculture estimated that global grain "carryover stocks" – the amount in the world's silos and stockpiles when the next harvest begins – totaled 432 million tons. 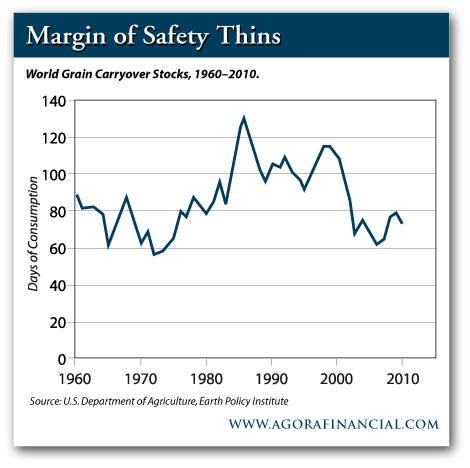 But what happens if the US scenario is worse than a "non-record" harvest? What if there's a Russia-scale crop failure here at home?

"When we have the first serious crop failure, which will happen," says farm commodity expert Don Coxe, "we will then have a full-blown food crisis" – one far worse than 2008.

Coxe has studied the sector for more than 35 years as a strategist for BMO Financial Group. He says it didn't have to come to this.

"We've got a situation where there has been no incentive to allocate significant new capital to agriculture or to develop new technologies to dramatically expand crop output.

"We've got complacency," he sums up. "So for those reasons, I believe the next food crisis – when it comes – will be a bigger shock than $150 oil."

A recent report from HSBC isn't quite so alarming...unless you read between the lines. "World agricultural markets," it says, "have become so finely balanced between supply and demand that local disruptions can have a major impact on the global prices of the affected commodities and then reverberate throughout the entire food chain."

That was the story in 2008. It's becoming the story again now. It may go away in a few weeks or a few months. But it won't go away for good. It'll keep coming back...for decades.

There's nothing you or I can do to change it. So we might as well "hedge" our rising food costs by investing in the very commodities whose prices are rising now...and will keep rising for years to come.

"While investor eyes are focused on the Gold Price as it touches new highs," reads a report from Japan's Nomura Securities, "the acceleration in global food price is unrestrained. We continue to believe that soft commodities will outperform base and precious metals in the future."

So how do you do it? As recently as 2006, the only way Main Street investors could play the trend was to buy commodity futures. It was complicated. It involved swimming in the same pool with the trading desks of the big commercial banks. And it usually involved buying on margin – that is, borrowing money from the brokerage. If the market went against you, you'd lose even more than your initial investment.

Nowadays, an exchange-traded fund can do the heavy lifting for you, no margin required. There are at least a half-dozen ETFs that aim to profit when grain prices rise. Deutsche Bank's offering, for instance, DBA, is also easy to understand. It's based on the performance of the Deutsche Bank Agriculture Index, which is composed of the following:

So you have a mix here of 50% America's staple crops of corn, beans, wheat and sugar...25% beef and pork...and 25% cocoa, coffee and cotton. It might not be a balanced diet (especially the cotton), but it could make for a good balance of assets if you're making your first foray into "ag" investing.

The meat weighting in here looks especially interesting compared to some of DBA's competitors, which are more geared to the grains. It takes about six months for higher grain prices to translate to higher cattle and hog prices.

You might be glad you captured that upside when you sit down to a good steak dinner a few months down the line. After all, it's going to cost you more.