END_OF_DOCUMENT_TOKEN_TO_BE_REPLACED

The US food stamp budget grew last by the entire GDP of this nearby Pacific country...

ARRIVING here at Rancho Santana, the first impression that strikes most folks is the raw beauty of the place, writes Eric Fry in The Daily Reckoning.

While playing around with some numbers on the back of a Rancho Santana cocktail napkin, we stumbled upon some shocking contrasts between Nicaragua and the US – shocking to us, at least.

Last year, the Supplemental Nutrition Assistance Program (SNAP) in the United States – i.e. food stamp program, part of the Food & Nutrition Service – spent $7.4 billion more than it did the year before. $7.4 billion happens to be almost identical to the entire GDP of Nicaragua, a nation of 5.9 million inhabitants.

Here in Nicaragua, the government is too poor to operate a SNAP program. The government's entire annual budget is only about $1.6 billion, which is less than 1/50th the size of the total SNAP budget. That $1.6 billion also happens to be the amount of customer money Jon Corzine "lost" as CEO of M.F.Global. It's not easy to lose customer funds equal to a nation's entire annual budget and not go to jail, but Corzine pulled it off.

The lack of a stamp program means poor Nicaraguans must rely on themselves or their families for their daily bread...or else starve.

These comparisons tell us little about how things ought to be, but they tell us a lot about how things are. Specifically, they tell us that the United States spends a spectacular amount of money trying to "manage poverty". And yet, the more the US tries to manage poverty, the more poverty spreads. The ever-expanding budget of the Food & Nutrition Service does not beget self-reliance; it begets ever-expanding government reliance.

Nevertheless, the more poverty spreads in the US, the more agencies like the FNS portray government reliance as economically advantageous.

"SNAP [i.e. food stamps] is the only public benefit program which also serves as an economic stimulus," the FNS asserts, "creating an economic boost that ripples throughout the economy when new SNAP benefits are redeemed. By generating business at local grocery stores, new SNAP benefits trigger labor and production demand, ultimately increasing household income and triggering additional spending...Increases in food stamp benefits can stimulate additional economic activity. Every five percentage point increase in the national participation rate [in food stamp usage] would generate a total of $2.2 billion in economic activity."

Nevertheless, the FNS seems to believe in breaking windows. During the last four years, the number of Americans receiving food stamps has doubled from 23 million to 46 million, while the direct cost of providing that support has skyrocketed from $30 billion annually to $71 billion. (The FNS' total budget topped $100 billion this year). 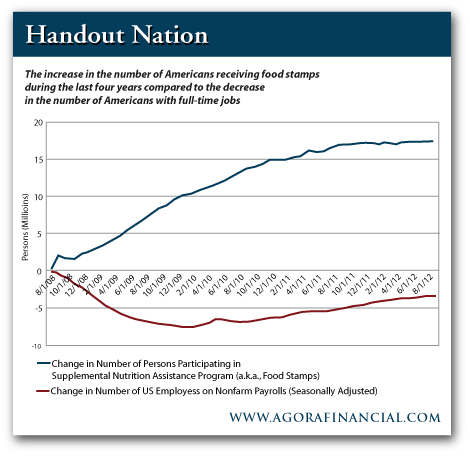 Therefore, if "participation" is the key metric of success, the FNS has succeeded brilliantly. But if "economic benefit" is the metric that matters most, the FNS' resounding success looks somewhat less successful.

For example, the agency asserts that every $1 billion of SNAP benefits produces $1.84 billion of economic activity, while also creating 8,900 if not 17,900 full-time jobs. Maybe so, but these data points are so devoid of context they might as well be olives or horseshoes...instead of data points.

Secondly, a full-time job also "creates an economic boost that ripples throughout the economy" and – we're just guessing now – a 1% increase in the national employment rate would probably generate a lot more "economic activity" than a 5% increase in the SNAP program participation rate.

As a fringe benefit, employment uses no tax Dollars to work its economic magic. To the contrary, employment produces additional tax revenues. So just maybe employment is better for the nation as a whole than government-assisted living.

Now let's take a look at that job-creation estimate. If $1 billion of SNAP benefits created 8,900 jobs, the FNS would be spending $112,359 per new job. The FNS calls that an economic benefit. We don't know what to call it.

But refusing to let facts get in the way of a good story, the FNS barrels ahead with its humanitarian-cum-economic-stimulus mission – trying to add folks to the food stamps roster.

You see, unfortunately for the FNS' economic ambitions, it's not as easy as it might seem to give money away in order generate economic growth. Some folks just don't want the government's money...even if you throw a party to give it to them.

Really, it's true; the FNS suggests "throwing a great party" as one way to introduce folks to the wonderful world of government reliance.

According to the FNS, only 72% of the folks who are eligible to receive food stamps are actually receiving them, which means that 28% of the eligible folks are still out there somewhere trying to make it on their own.

Seniors account for a disproportionately large proportion of the "missing 28" – especially those Seniors born before 1945. The FNS refers to them as the "Silent Generation" because they endure their hardships silently, rather than running to the government for help. These folks, by and large, still cling to woefully outdated notions like self-reliance and dignity.

"For many in the Silent Generation," the FNS explains, "relying on 'welfare' or any type of public assistance is not acceptable. This generation of 'self-sacrifice' was raised to be independent and self-reliant. They don't want to 'lose face' in front of their peers...From USDA research reports and first-hand experience, we know some of the reasons why Seniors do not participate in SNAP."

Topping the list of reasons why the Silent Generation declines participating in the food stamp program is what the FNS calls, "Welfare stigma". Next on the list: "Embarrassment". The FNS explains:

"Seniors believe that family members and friends would view them differently and might think that they are not able to care for themselves," the FNS Web site explains. "Plus, many Seniors would be ashamed to be seen at the welfare office applying for benefits or using the EBT card at the grocery store."

Third on the list: "Sense of Failure". Therefore, says the FNS, "the majority of Seniors who are potentially eligible for SNAP do not participate." But it doesn't have to be this way. The Silent Generation need not be so silent. If only Seniors understood the benefits of government assistance, they too could become wards of the State...and that would mean extra economic growth for the rest of us.

That's why the FNS has prepared special scripts, tailored just for members the Silent Generation. These "mini-scripts" are designed to help agents and associates of the FNS "overcome the word 'No'."

When, for example, a Senior says he is embarrassed to receive welfare in any form, the scripted response should be:

"You worked hard and the taxes you paid helped to create SNAP. Now it's time to let it help you buy the healthy foods you like to eat."

But in those circumstances when "education" and "reason" fail to persuade Seniors to sign up for the SNAP program, the FNS suggests "Throwing a great party. Host social events where people mix and mingle. Make it fun by having activities, games, food, and entertainment, and provide information about SNAP. Putting SNAP information in a game format like BINGO, crossword puzzles, or even a 'true/false' quiz is fun and helps get your message across in a memorable way."

And really, why stop there? Why not introduce "collectible" food stamps bearing the images of Betty Grable, Frank Sinatra, Lana Turner, Robert Mitchum and other Hollywood icons that the "Silent Generation" might treasure. After all, government dependence should be fun, as well as helpful.

And think of the economic benefit of distributing collectible food stamps that can appreciate far beyond their face values...and then just imagine the economic multiplier effect of these collectibles changing hands back and forth in retirement homes!

The FNS has not always been one part party-planner, one part central planner, one part Harvard B-School economic theorist. The FNS used to be a plain old government assistance agency. Wasn't that enough?

Here's an idea: Provide help to those who need it; spare the rest of us the bogus economic theories that justify the government's intrusion into every nook and cranny of private life.

It's good to feed the hungry; but it's also good to liberate the capitalistic forces that create opportunities for self-reliance. "Give a man a fish," as the saying goes, "you feed him for a day. Teach a man to fish, you feed him for a lifetime."

Beware the economy whose government tells its citizens, "No fishing pole required; we've got plenty of fish for you."