END_OF_DOCUMENT_TOKEN_TO_BE_REPLACED

Nothing changed. It just got more intense post-FOMC no tapering vote...
LAST WEEK the Fed treated us to a whipsaw as market perceptions apparently were not in line with the FOMC policy statement, which was basically a punt, writes Gary Tanashian in his Notes from the Rabbit Hole.
Then the very next day the Fed's James Bullard jawboned the media about a possible October Federal Reserve tapering. Hence, a letter writer was left with images of a 3 ring circus heading into the weekend.
Humorously enough (you have got to admit that as scary as it is watching officials try to control financial markets to such a finite degree, there is humour in this as well) the post-FOMC economic data were mostly positive, whereas the pre-FOMC data had been negative (each with regard to expectations).
Data Negative? Cue FOMC roll over. Data Positive? Cue Huey, Dooey and Louie with the 'taper' jawbone routine. It is an official clown routine. In fact, I picture them in the little clown car at the circus. Every time the market's perceptions may be drifting toward the root of what the Fed is actually doing (inflating), the little car zooms in to the center ring and they come piling out. It really is funny I tell you.
Picture them in baggy, multicolored suits with polka dots and they will no longer seem like your enemy. They will appear as they are; helpless beyond their ability to distract from the business at hand, which is the market's natural discounting of monetary policy actions. Unfortunately, most circus goers continue to buy the routine for now.
Is it possible that the Fed got whipsawed by the data? Here is last week's economic reporting (courtesy of MarketWatch.com), which shows a mostly down pre-FOMC data set and mostly up data post-FOMC:
Here's last week's economic data, courtesy MarketWatch.com: 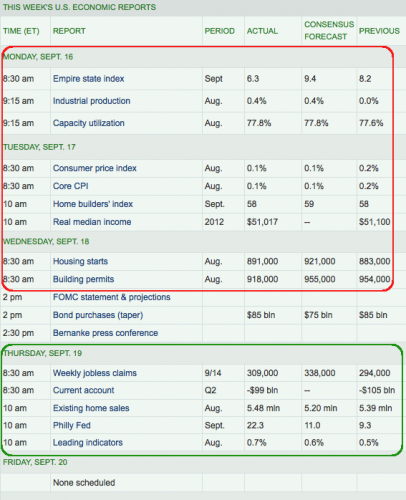 So rather than finding a dark conspiracy around every corner why don't we just assume that the Fed got the [positive] data around the same time we did and immediately got to work with its hyper-sensitive expectations management and flip flop routine? 'Send in the damned clowns!'
We need to understand that through the current QE operation the Fed is both inflating and trying to dampen inflationary signals at the same time. That is because they are buying "longer term" Treasury bonds (along with MBS) in an effort to suppress long-term interest rates, in theory helping keep the yield curve in check. It is a less intense process than Operation Twist, which not only bought long but also sold short.
It will do us no good to chase policy makers around in their little clown cars. But in navigating an entertaining, confusing, noisy, frustrating and comical market it will do us a lot of good to remain on the macro data. A premise to gold's investment case is a rising yield curve, in which long dated T bonds decline relative to shorter dated bonds. That is because among other things, a rising curve indicates rising inflation expectations.
People focused on the US Dollar as an anti-market to gold get excited about QE because it is the act of printing Dollars to buy distressed garbage (MBS) and long-term Treasury bonds.
But the genius of QE – or maybe it is just a cheap parlor trick doomed to be exposed one day – is that it theoretically dampens the curve (Op/Twist-lite) because it favors long-term bonds over short-term bonds and thus seeks to mute inflationary signals. In other words, if the mythical 'bond vigilantes' are selling, the Fed is buying. 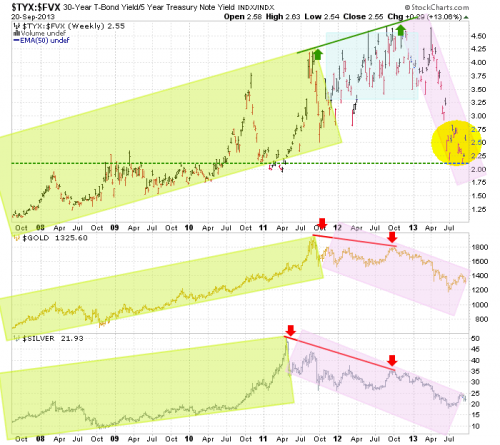 The weekly chart above shows the correlation of the 30-5 yield spread vs. gold and silver since 2008. The rising curve eventually went hand in hand with upside blow offs in silver and then to a lesser extent, gold in 2011. The curve continued to rise and eventually top out while the precious metals made lower highs as they digested the excesses.
Now the curve is at support and the metals are trying to bottom. Last week's 'taper' hype aside, nothing has changed about the status. But the point is that when the Fed does start to taper, whether it be in October as Clown 1 suggested last week, or sometime later, it could theoretically release pressure on the yield curve.
The sooner the Fed is compelled to 'taper' its bond buying, the sooner we may get on with the process of transitioning from an environment where they are perceived as heroes as opposed to what they actually have been for the most part since 2001; clerks that injected economic hazards in the first place through systematic inflationary policy trying to clean up each mess with more intense and covert forms of the same policy. The transition would be to an environment where they are again reviled for so thoroughly meddling in the economy as to render it dysfunctional.
Gold would then have its day, as confidence wanes and the yield curve responds, packing the clowns into their little car, sending them right out of the Big Top and back to the traveling Carny circuit where they belong.

Last week was one big cluster of emotion and most of us were whipsawed by it. The Fed exposed itself last week as being firmly NOT in total control as their pristine post-2011 image was tarnished. In this market, we are in a process of surviving and then capitalizing by understanding what is going on beneath the surface.
Nothing has changed, it just got more intense last week. The real inflation mechanism, Zero Interest rates (ZIRP) continues apace and the parlor tricks they are performing on various other T-bond maturities will eventually fade.