END_OF_DOCUMENT_TOKEN_TO_BE_REPLACED

A rare thing indeed since 2011. How did Pierre Lassonde do it...?
WOULD you like your advice from someone who has been successful or from someone who's failed? asks Jeff Clark, senior precious metals analyst at Casey Research here.
I'd prefer to hear from a winner.
Now that the gold market has been mauled by a bear, we can sort out the pretenders from the contenders in the mining industry. After all, there's nothing like a major down cycle to reveal which companies are run by people who know how to prepare for bad weather.
The price of gold has fallen more than a third since August 2011, crushing the prices of gold stocks...but not all of them.
Check out the performance of Franco Nevada (NYSE:FNV). 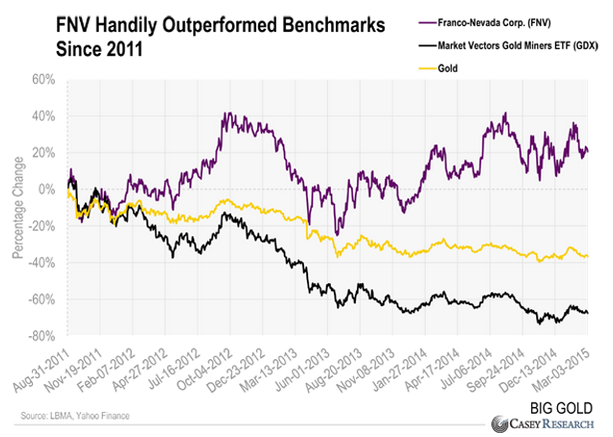 FNV shares have actually risen in this bear market. Even if you bought the stock when gold peaked in 2011, you're sitting on a profit.
How many gold mining stocks can make that claim?
You might think it's because royalty companies have performed better than producers in this time period, but the other royalty heavyweights – Royal Gold and Silver Wheaton – are down with most other stocks in the sector since gold's 2011 peak.
FNV chairman Pierre Lassonde was one of the fathers of the royalty business model developed in 1985. So apparently he knew how to help position his company to benefit from the financial pain most producers haven't been able to avoid.
Watching and following an industry's most successful players can pay off very well for investors. So what's Pierre doing today?
Given the state of the gold market right now, he's making a major call, one of the most consequential in his 40-year career. It's a clear and very timely message for gold investors that you'll be glad you received. He knows what he's talking about.
Join him along with Frank Holmes, Rick Rule, Bob Quartermain, Ron Netolitzky, Doug Casey, Louis James, and myself in our free Casey webcast, "Going Vertical". It's a one-hour event that is well worth your time.