END_OF_DOCUMENT_TOKEN_TO_BE_REPLACED

Deflation or inflation? With the Fed in charge of the printing press...?

THE MOST HOTLY DEBATED topic amongst finance talking heads these days? asks Bud Conrad, chief economist for The Casey Report.

"Deflation or inflation, what is it going to be?"

There is no question that we are currently experiencing asset price deflation and economic slowing. But we here at The Casey Report see this as a transitional phase. In our analysis, the truly extraordinary and historic levels of government spending and bailouts being deployed to keep the economy afloat are certain to lead to inflation in the not-too-distant future.

While our long-term view remains solidly in the inflation camp, over the past four months, the US's financial problems have caused deflation in many important asset classes. Put another way, a reduction in asset prices amounting to about $14 trillion (in housing, equities, etc.) is bigger than the government's countervailing actions of around $3 trillion – the total, so far, arrived at by combining the measures taken by the Fed with the federal government bailouts.

But there are important differences between a sharp collapse in asset prices and the potentially leveraged stimulus packages.

The Fed's actions, if taken in normal times, would be multiplied throughout the banking system as banks used the new money to increase their lending and, in so doing, leveraged the funds throughout the entire economy. This time around, however, while the Fed has been extremely accommodating to the banks, even going so far as to make direct loans to them, the effect is moderated. That's because of tighter lending standards, the need to replenish capital, and the demise of many complex structures, which were previously available for securitizing and selling loans on to others.

As a result, the banking system as a whole is not responding to the stimulus. It can be thought of as pushing on a string. Simply, as large as the stimulus has been to date, it has not yet been enough to offset the effects of the economic collapse. The resulting deflationary pressure increases concern over a downward spiral in the economy.

Another way to view this is that consumers and businesses alike are now anticipating deflation, which makes saving and survival the primary goal (in an inflation, spending becomes the primary goal, unloading the money before it can lose value). Of course, a cutback in spending and demand drives down the price of things, at least temporarily.

But the longer-term expectation is that Bernanke's assertion – an assertion now backed up by action – that the government can and will print new money to any extent needed is the more important force.

As long as there is evidence of serious economic collapse, it can be expected that the bailout programs will be ratcheted up. And, to the extent that the public expects deflation – and so businesses reduce prices to raise cash and reduce inventories – the wave of price inflation experienced in the spring of 2008 will be moderated. But within the seeds of that positive are the very big negatives that the government, seeing that its extraordinary money creation is not being evidenced in rising prices, will be emboldened to go even further.

This is of great importance because, unlike in the 1930s, there is no limitation on what the government can do, because there is no gold standard to enforce monetary discipline. Instead, the world is afloat on a sea of massive new government spending and credit facilities. After a lag, the stimulus will perform the expected actions of reinstating credit and debasing the currency. But never lose sight of the fact that the government is creating money out of thin air. Some call it bailouts, we would call it legal counterfeiting on an epic scale.

In the New Deal, FDR created the FDIC and guaranteed bank deposits, set minimum bank deposit rates, and brought the discount rate to almost 0%. He cut the dollar/gold exchange rate from $20.67 to $35 and confiscated gold; i.e., devalued the dollar by 40%.

While the beginning of the collapse from too much credit was parallel to the previous experience of the depression, the response today is different. The size of the monetary stimulus and the risk to the dollar from foreign holders – who can also see the implications of the out-of-control deficits – strongly argue for a return to inflation much sooner.

How much sooner? Impossible to say, but remember: deflationary or inflationary fears are not the independent agent that will determine whether or not we will see inflation (though, in the intervening phase, they will certainly be an important economic driver).

The Federal Reserve is throwing everything it can at the financial markets to fight deflation. As you can see in the chart below, the Fed has doubled the size of its balance sheet since September. 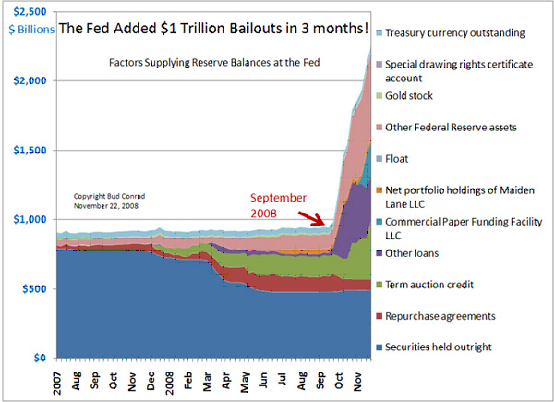 On December 16, the Fed cut interest rates to a range of between a quarter of a point and zero. That is lower than ever in the 94 years of their existence. And they promised in the accompanying announcement to provide additional funds to "stimulate the economy through open market operations and other measures that sustain the size of the Federal Reserve's balance sheet at a high level...the Federal Reserve will purchase large quantities of agency debt and mortgage-backed securities to provide support to the mortgage and housing markets."

At this time individuals and companies alike are sensing deflation and, as a result, are raising cash, in the process deleveraging the extreme debt loads. That is causing downward pressure on asset prices and, soon, a serious contraction in the economy as more and more companies lay off workers and cancel spending. This will not be a happy holiday season. And it will be a long-term recession and maybe even a protracted depression.

But the fact of the extraordinary deficit spending is there for all to see and, over time, more and more will see it. And, more to the point, understand it. In fact, thanks to the internet and always-there financial media, the shift in sentiment can happen almost on a time. Slowly at first, and then faster, fears over inflation will return, but this time they will be well founded.

The economic downturn could be protracted, but that does not mean that the deflation will be protracted. Instead, once we are through this phase, we expect to see poor economic conditions, but against a backdrop of rising inflation. Stagflation is a word that remains in our vocabulary.

Inflation or deflation – whatever the current market trend, there is a way to play it. Every crisis contains opportunity as well as danger, and many of those who manage to mitigate the risk and grab the opportunity have made a fortune in times like these.