END_OF_DOCUMENT_TOKEN_TO_BE_REPLACED

Either way, the new US emphasis is away from Fed policy...

The move was seen as more dovish than many market analysts had anticipated. BCA Research went so far as to call it an "unhike", citing a number of factors, including forecasts of only three rate hikes in 2017 instead of four.

Immediately following the announcement, the Dollar lost ground, clearing the way for gold to climb more than $20 an ounce.

During her press coverage, Fed Chair Janet Yellen expressed doubt that the US economy can grow much faster than 2% annually over the next couple of years, placing her squarely at odds with President Donald Trump, who campaigned on a pledge to boost GDP growth as much as 4%. 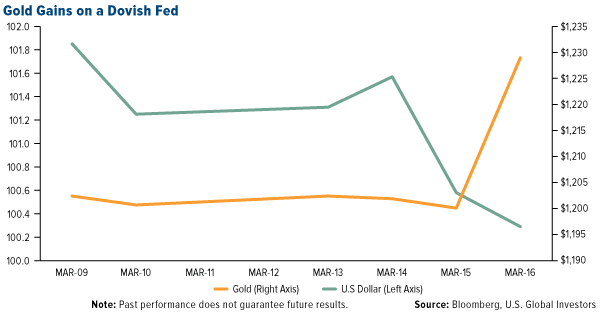 Since Trump's inauguration more than 55 days ago, we've seen a steady power shift from the monetary side to the fiscal side. I believe this will only continue to accelerate.

As I said before, the eight-year stock market rally under President Barack Obama was, in many investors' eyes, driven not by fundamentals but the Fed's low-rate policy. Now, however, investor exuberance is being supported by proposed fiscal policy such as lower corporate taxes, deregulation and historically large budget cuts to help finance the rebuilding of the nation's infrastructure and military.

Not everyone is confident Trump can deliver on his infrastructure promise, however. The American Society of Civil Engineers (ASCE) just gave our nation's infrastructure a dismal grade of D+, adding that we face a huge funding gap of nearly $3 trillion between now and 2025.

Last Thursday, after Trump unveiled his proposed budget for fiscal year 2018, ASCE president Norma Jean Mattei issued a discouraging note, writing that the president's budget "would eliminate funding for many of the programs designed to improve our nation's infrastructure."

Although the $1 trillion could be raised at a later time, "that is not the way to effectively invest in, modernize and maintain our aging and underperforming infrastructure," Mattei said.

Some investors see additional headwinds in White House policy. Near the end of January, the commercial airline industry was disrupted when Trump signed his initial executive travel ban from seven Muslim-majority countries. Between January 28 and February 4, bookings issued by those countries fell 80% compared to the same period in 2016, according to travel research firm ForwardKeys.

What might surprise some readers is that the ban's effects went well beyond the Middle East, reaching most major world markets. Net international bookings to the US cooled 6.5% during the period when the travel ban was in effect. 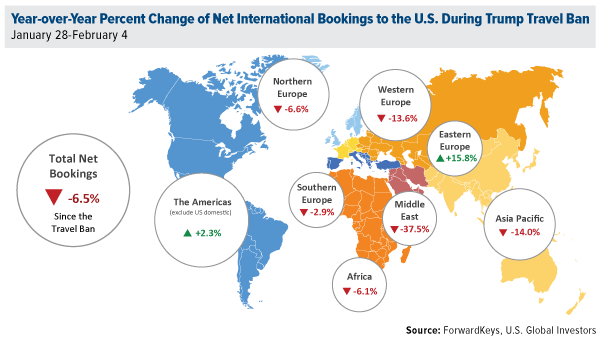 Among the other unintended consequences was news that customs agents were detaining a number of US citizens who might not have had Western-sounding names. Sidd Bikkannavar, a US-born engineer, was not only detained on his way back home to Los Angeles but also asked to turn over his work-issued phone and provide the access PIN to unlock it, potentially compromising sensitive material and contacts related to his work at the NASA Jet Propulsion Laboratory. Muhammad Ali Jr., son of the celebrated heavyweight boxer, was also stopped at least twice while flying in recent weeks.

Trump's second travel ban, which was also struck down by a federal judge, was opposed by nearly 60 US technology companies – including Airbnb, Pinterest, Lyft and Warby Parker – which filed a brief in support of Hawaii's lawsuit to block the executive order. Tech companies "and thousands of other businesses throughout the American economy have prospered and grown through the hard work, innovation and genius of immigrants and refugees," the brief read.

I bring this up only to show once again that regulations, in whatever form, often emerge out of the best of intentions – in the travel ban's case, public safety – but they sometimes carry negative consequences that act as friction in our economy. Government policy is a precursor to change, as I like to say, and it's important for us as investors to recognize their cause, effect and possible ramifications.