END_OF_DOCUMENT_TOKEN_TO_BE_REPLACED

Nothing like this has ever been done to the Federal Reserve's balance-sheet before...

UNDER THE DIRECTION of Ben Bernanke, writes Bud Conrad, chief economist at Casey Research, the Federal Reserve has completely rewritten its mission.

Many articles in our own International Speculator and Casey Report have reported the strange growth in the loans they've made...and also explained how Bernanke has, for a long time, espoused unconventional actions to avert deflation and expand the economy.

That's why the charts I'd like to show you below tell such an amazing story.

The Federal Reserve was never envisioned to be lender of last resort to a whole slew of investment banks, money-market mutual funds, and commercial debt issuers.

The situation is not easy to sort out, for the simple reason that the extent of their actions is not presented by the Fed via clear and concise data. Instead, the data is complex and hard to analyze, partly because of the piecemeal way the actions were taken, but also probably due to a desire by the Fed to avoid public scrutiny and criticism.

Digging into the details of the Fed's balance sheet, however, reveals the complete change of composition and direction of the Fed.

The most obvious change is that they have doubled the size of their assets and liabilities. A year ago, the Fed's assets consisted almost entirely of government Treasuries and a little Gold Bullion.

That was a clean, safe balance sheet. The only important liability was the currency they issued (America's paper dollars). They also had a small reserve of deposits from all the depository banks. When Greenspan wanted to give the economy a boost by lowering short-term interest rates, he would create some money and buy Treasuries. He could also do the reverse.

Bernanke has turned this upside down. Initially he made focused loans to big banks. But then the loans became bigger than the reserve deposits, leaving the banks in total as net borrowers. The concept of a fractional reserve no longer applies when the reserve is net negative.

To fund yet more emergency loans as the credit crisis escalated, Bernanke then sold off half of the Fed's Treasuries. And he traded Treasuries for toxic waste of poor-quality mortgage-backed securities. And he encumbered half of the remaining Treasuries with "off balance sheet" swaps of about $220 billion.

The balance sheet started with $800 billion of mostly reliable assets and now has about $250 billion of unencumbered Treasuries. The biggest source of funding is from the Treasury. Banks are also leaving cash deposits with the Fed, now that the Fed is paying interest. So the important conclusion is that the paper dollars now issued come from a far less soundly structured Fed, an organization that is more interested in bailing out the financial community than defending the dollar.

The first chart below compares last year's assets, which were mostly Treasury bonds, to this year's twice-as-large and far more questionable mix: 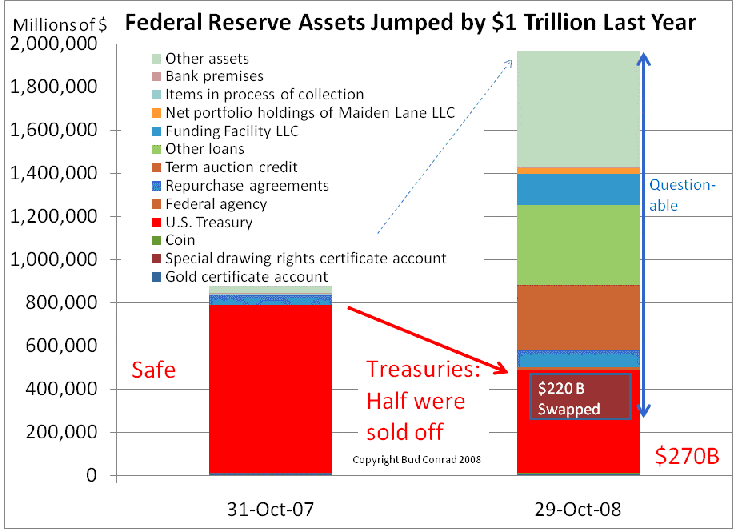 The other side of the balance sheet shows that the Fed has borrowed and taken in deposits so as to fund emergency loans that are now as big as the total issuance of US currency. In effect, the Fed has doubled its footprint and doubled its responsibilities...but mostly under the covers.

They added almost $1 trillion new credit to the financial world in about two months. 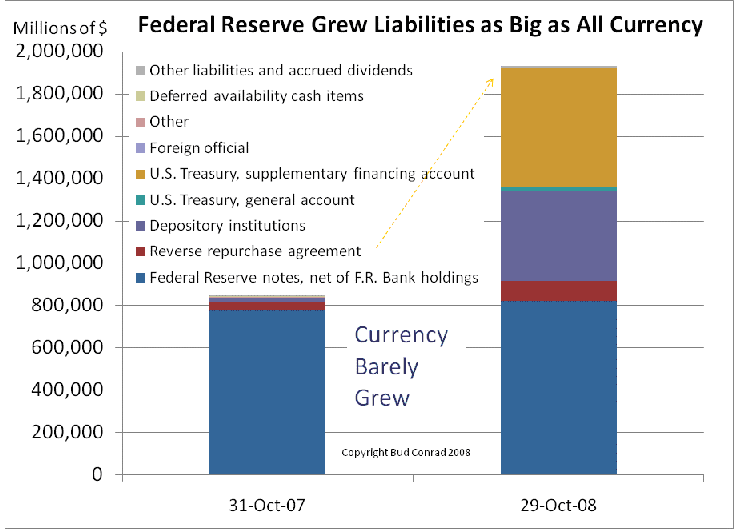 There are additional important actions not included in the Fed's balance sheet. For example, the latest Commercial Paper Funding Facility (CPFF) starting Oct. 27th has issued $143 billion so far. The Fed also invented a Money Market Investor Funding Facility (MMIF) to guarantee up to 90% of $600 billion of loans to that sector. They do this through special-purpose vehicles established by the private sector (PSPVs).

All told, these programs are beyond keeping up with. Nothing like this has ever been done before by the Federal Reserve. In time, the consequences in terms of confidence in the Dollar will be bad.