END_OF_DOCUMENT_TOKEN_TO_BE_REPLACED

Fed currency swap data suggests the US could be bailing out Europe by the backdoor...

Such a shame. He had been doing so well ever since he put that bottle of "Old QE" back on the shelf last June...and got sober. But a few weeks back, he tripped up on his 12-step program and started nipping at the bottle again. Slowly at first...then to excess.

Yes, it's true, dear reader, Bernanke, is printing money again. That's bad enough. But this time, after he prints it, he sends it over to Europe. Crazy, but true. The chart below tells the tale. It shows the quantity of currency swaps on the Fed's balance sheet. 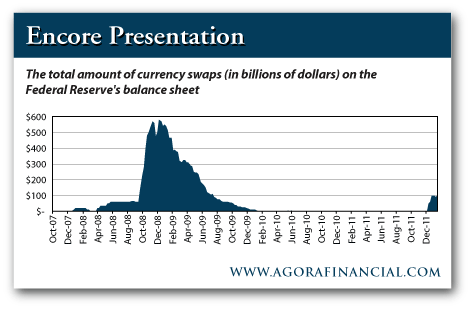 What are these things?

During the crisis of 2008-9, the Fed supplied nearly $600 billion of this form of credit to various financial institutions. Eventually, as credit conditions improved, the borrowers unwound these swaps, causing them to disappear completely from the Fed's balance sheet…until late last year.

Enter the indirect bailouts...Here's how they work:

The Fed extends unlimited lines of credit to the ECB under so-called swap agreements. The ECB, in turn, provides dirt-cheap capital to Europe's struggling banks. Then, the banks — understanding an unspoken quid pro quo — use the dirt-cheap financing to buy the high-yielding bonds of Greece, Italy, Spain, et cetera.

As recently as a few weeks ago, the amount of Dollar swaps — i.e., loans — with the ECB was only $2.4 billion. "For the week ending December 14, however, the amount jumped to $54 billion," the Wall Street Journal reports...Thus far, the Fed's indirect bailout of Europe is relatively small, at a mere $62 billion by the first week of January. But we should expect that number to grow…a lot. And as that number grows, the Federal Reserve will be providing yet one more reason to Buy Gold, silver and other hard assets…

Indeed, since 6 January the Fed has added another $41 billion (and counting) in currency swaps to its balance sheet — bringing the grand total to $103 billion, as of January 18th. That little doodad at the upper right of the chart below represents $103 billion of currency swaps. (The fact a $103 billion increase on a chart of Fed assets is barely visible says something about how out-of-control the Fed's activities have become). 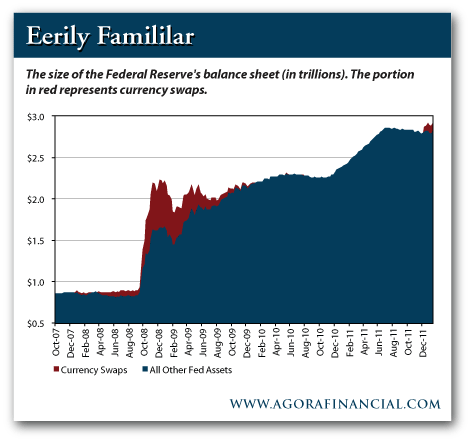 The mainstream financial press has not seemed to notice — or care — that the Fed is printing Dollars and sending them to Europe…even though this new Fed operation is a kind of "QE3" without any headlines or fanfare…and without any direct US-based beneficiaries.

What does interest the press, however, are the "improving credit conditions in Europe." LIBOR rates have retreated a bit from their recent highs, for example, which means that European banks are finding it easier to obtain short-term credit.

Of course they are! The Fed is flooding the European financial markets with cheap credit, thereby lowering the demand for credit from traditional sources in the private sector. But unless the Fed intends to single-handedly bail out every insolvent bank and government in Europe, the short-term balm it is providing will achieve absolutely zero long-term benefit…except for the owners of precious metals.

If you'd like to keep tabs on the growth of this Fed asset, the Cleveland Fed's website makes it very easy.

While watching, remember to add a few precious metals to your portfolio.

Get the safest Gold Bullion – stored in your choice of US, UK or Swiss vaults – at the lowest possible price with BullionVault...