END_OF_DOCUMENT_TOKEN_TO_BE_REPLACED

Ten-year US interest rates have been spooked higher by the Fed's new tapering talk...
WHEN former Fed chief Alan Greenspan was praised for delivering a clear message on US monetary policy, writes Gary Dorsch at Global Money Trends, he used to reply, "I guess I should warn you. If I turn out to be particularly clear, you've probably misunderstood what I've said."
On June 7th, Greenspan set off the alarm bells on Wall Street by telling viewers of CNBC that the time had arrived for the Fed to begin tapering its $85 billion a month bond buying binge, even if the US economy isn't ready for it.
"The sooner we come to grips with this excessive level of assets on the balance sheet of the Federal Reserve – that everybody agrees is excessive – the better," he said in a "Squawk Box" interview.

"There is a general presumption that we can wait indefinitely and make judgments on when we're going to move. I'm not sure the market will allow us to do that."

Greenspan said he's not sure the markets will allow an easy exit. "If the Fed moves too quickly in reining in QE, it could shock the market, which is already dealing with a very large element of uncertainty.

"Gradual is adequate, but we've got to get moving. Bond prices have got to fall. Long-term rates have got to rise. The problem, which is going to confront us, is we haven't a clue as to how rapidly that's going to happen. And we must be prepared for a much more rapid rise than is now contemplated in the general economic outlook."

Two weeks later, on June 19th, Fed chief Ben Bernanke triggered one of biggest financial panics since 2008 by hinting that the Fed could begin scaling down its $85 billion per month QE scheme much sooner than expected. Bernanke then spent the next six weeks trying to stabilize the bond market by explaining in painstaking detail the precise timing and conditions under which "tapering" might or might not take place.
However, in regards to the panic sell-off in US bonds and stocks in the month of June, a Wall Street Journal editorial said, "The selloff may be more than anything a side-effect of investor addiction to the world's central bankers. One explicit goal of the Fed's monetary interventions has been to push up asset prices, and it has succeeded. But to the extent those price increases are a function of speculative money flows – they were bound to correct eventually.
"And the Fed is doing the right thing. Central banks can't keep floating the world economy forever, and in our view - the sooner the withdrawal begins the better," the WSJ said.
The main reason for tapering QE-3 has very little to do with the notion that the US economy is on sound footing. Instead, just the opposite is probably true. The fragile US economy might find itself sinking into a full blown recession by the first quarter of 2014. However, the Fed's determination to start scaling down QE-3 is essentially in reaction to the demands of the Bank of International Settlements (BIS) – the central bank of the world - which says it is time to rethink US monetary policy.
The BIS argues that blowing even bigger bubbles in the US stock market can do more harm to the US economy than the old enemy of high inflation. Thus, going forward, the costs of continuing with QE now exceed the benefits.
A BIS working paper that traces booming stock markets over the past 110-years, finds that they nearly always sink under their own weight – and causing lasting damage to the local economy.
Asset bubbles often arise when consumer prices are low, which is a problem for central banks who solely target inflation and thereby overlook the risks of bubbles, while appearing to be doing a good job. There's also the "Greenspan and Bernanke Put" – the implicit expectation that the Fed would not block a liquidity driven bubble in the stock market, and would quickly inject liquidity into the markets, to provide a safety net for speculators, and restore investors' confidence whenever risky bets go sour.
"Lowering interest rates or injecting liquidity when negative news materializes, but not hiking them as bubbles build-up, can be rather insidious in the longer run. They promote a form of moral hazard that can sow the seeds of instability and costly fluctuations in the real economy," the BIS warned. 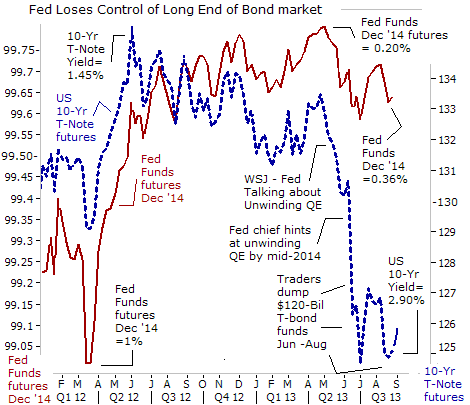 So just how can the Fed pull off its next magic trick? That is to say, how can the Fed scale down its QE-3 injections on the one hand, while on the other hand preventing the yield on the 10-year T-Note from climbing above the psychological 3% level?
US retail investors plowed as much as $1.2 trillion into bond funds during the 4.5 years ending May '13. However, they've become jittery over the prospect of the Fed scaling down QE-3, and they've already liquidated one tenth of their holdings of bond funds in the past three months. China and Japan were net sellers of a combined $40 trillion of US T-notes in June. And the US Treasury is expected to sell $660 billion of new debt in the upcoming fiscal year.
With all these bearish forces working against the bond market, how can the Fed prevent an upward spiral in interest rates that could deal a knockout blow to the US economy, and burst the stock market bubble? China's deputy Finance chief Zhu Guangyao and central bank Vice Governor Yi Gang, are warning the Fed, that it must also consider when and how fast it unwinds QE, in order to avoid harming Emerging markets.

According to a March '12 working paper written by economists at the Chicago Fed, it says the Fed could assert itself on the Treasury yield curve by simply issuing verbal clues on the future path of short-term interest rates. This strategy, dubbed "Forward Guidance", is utilized to cap longer-term bond yields. "It seems possible for the FOMC to change longer term interest rates out of its control by promising to persistently lower the shorter term rates within its control," the authors wrote.
So there's the idea that the worst could be over for T-bonds, if the Fed sticks to its "Zero Interest Rate Policy," (ZIRP) at the front end. The Fed is pledging to keep the fed funds rate pegged near zero for as long as the jobless rate is above 6.5%, and the inflation rate is below the +2.5% level.
Since the US government has the exclusive right to fudge the economic data for its own political purposes – it's reasonable to expect the Fed to get the political support its needs from governments apparatchiks, and could keep the fed funds rate locked near zero percent, and in turn, keep the 2-year T-note yield submerged below 50-basis points – for as far as the eye can see. 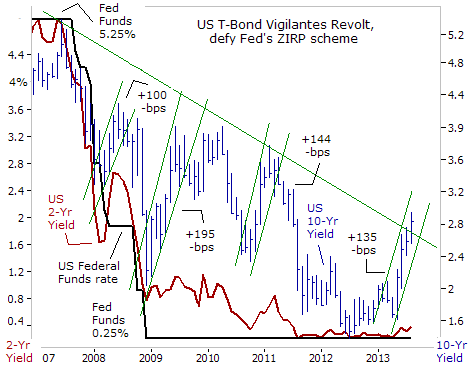 In Chicago, the federal funds futures contract for Dec 2014 delivery is yielding a paltry 0.36%, meaning traders don't see any Fed rate hike until 2015. Yet despite the anchor of ultra-low short term rates, it appears as though the Fed's magic spell over the 10-year T-note market is starting to wear off.
Prices of long-dated US bonds have plunged, and are on track for their worst 4-month stretch since 1996. The Barclays" index for Treasuries that mature in 20-years or longer, (ticker symbol TLT) has fallen 13% so far this year – its worst performance since it was launched in 1976. T-bond prices have plunged even though the US economy is growing at a snail's pace, and is at risk of sliding into a full blown recession next year.
In a speech given on March 3rd, Fed chief Ben Bernanke tried to explain that the yield on the 10-Year Treasury note can be divided into three sub-rates: expectations about future inflation rates, expectations about what the Fed will do with the fed funds rate, and the term premium (the amount that Treasury holders demand to be compensated for going further out on the curve). Of these three variables, the Fed has the most influence over the fed funds rate. The Fed is praying that ZIRP plus reduced dosages of QE can cap the upward spiral of longer-term bond yields.
Such as long-shot possibility could materialize, however, if the 53-month old Bullish rally in the US stock market starts to fizzle out, and if the stock market begins to slide into a nasty correction of -10% or more. If the stock market begins to nosedive, due to the realization that the US economy is sliding into a full blown recession, including job losses, then there could be a rotation from the high flying equities and into safer haven T-bonds.
In spite of the dismal performance, technical analysts have noted that there were prior flare-ups, with 10-year T-bond yields increasing +100-bps, +195-bps, and +144-bps respectively. Each of these prior upturns in yields eventually fizzled out and reversed. The Fed's lock down on the short end of the yield curve and massive purchases of T-bonds helped to place a ceiling over the long-end. But now that the Fed is expected to scale down QE-3, in an effort to prevent the emergence of an even bigger bubble in the US stock market. Traders find themselves sailing into new and unchartered territory, and trying to figure out how to profit from the Fed's exit from its radical QE experiment.
For investors trying to pinpoint when the Fed will unwind QE-3, the message from researchers at a pair of influential regional Fed banks is clear: "Don't bother." More crucial will be signals from the Fed on when it will start to raise short-term interest rates from their current near-zero level.
"Our analysis suggests that communication about when the Fed will begin to raise the federal funds rate from its near-zero level will be more important than signals about the precise timing of the end of QE3," San Francisco Fed senior economist Vasco Curdia and New York Fed senior economist Andrea Ferrero wrote.
So far however, just the opposite appears to be true, as the Fed is losing control of the bond market, and the long dormant T-bond vigilantes are gaining the upper hand, as it weans itself off QE.