END_OF_DOCUMENT_TOKEN_TO_BE_REPLACED

Sure, the US Fed chairman, Ben Bernanke, says that it is all about jobs and growth, as shown by various 60-year theories pushed by Lord Keynes.

Really? Let's get serious. This thinking has done nothing over five years. It has prolonged the suffering. Another round virtually guarantees continued economic stagnation. QE is poison for the future of American prosperity.

Is Bernanke just ignorant of the economics of adjustment? Or is there more going on? Very few commentators have considered this possibility. They mostly take Bernanke at face value. It's time that we look a bit deeper, remembering that the big banks are the Fed's main clients.

Let's first consider one of the great mysteries of current Fed policy. Why is the Federal Reserve paying banks 25 basis points on their excess reserves parked at the Fed? This policy guarantees that banks have greater incentive to do nothing, rather than lend to you and me. In this way, the Fed's thinking seems to be at war with Bernanke's stated objectives.

Of course, a quarter point doesn't sound like much. But it has made a world of difference. Since the Fed put the policy in place during the dark days of October 2008, there is now over $1.4 trillion sloshing around the central bank. Before 2008, there were exactly zero excess reserves held by the Fed. 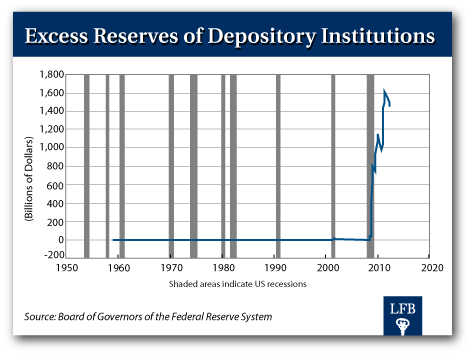 This is something of a puzzle. People have been puzzling about it for years. Even the grand old man of tight money, ex-Fed chair Paul Volker, doesn't understand why the Fed is writing checks totaling $3.75 billion a year to the nation's banks.

"I don't quite understand," he said, "why they're putting all this money into the economy and then paying interest on excess reserves of the banks, which is where the banks are parking some of the money."

And remember, the Federal Reserve sends most of its income to the US Treasury. The Fed transferred $76.9 billion in earnings to the US Treasury during 2011 but it could have transferred nearly $4 billion more. That won't balance the budget, but that's another few billion Dollars that taxpayers are ultimately on the hook for.

The thinking behind this is suspicious if nothing else. Consider that the same month that the Fed started paying for excess reserves, Congress and the FDIC approved the Transaction Account Guarantee (TAG). For the uninitiated, TAG provides unlimited FDIC insurance for noninterest- bearing accounts on deposit at the nation's banks. Unlimited.

So if you are willing to forgo a (very) few basis points of interest, the FDIC will cover your deposits even above the $250,000 limit. TAG deposits total about $1.3 trillion. And remember, banks aren't paying anything for TAG deposits, so banks enjoy a nice, easy stream of revenue from government policy arbitrage.

Back in 2008, the New York Fed was a bit more overt about its plans:

"Paying interest on excess balances will permit the Federal Reserve to provide sufficient liquidity to support financial stability while implementing the monetary policy that is appropriate in light of the System's macroeconomic objectives of maximum employment and price stability."

"Financial stability" means that profitable banks and the Fed always covers the backs of the big banks. No need for the shocked face: After all, the banks own the Federal Reserve system. Since three- quarters of TAG deposits are at the top five banks, a back-of-the- envelope calculation means $2.81 billion is being funneled to the too-big-to-fail banks courtesy of the TAG/pay for reserves program.

That's pretty good work when you can find it.

Of course, this whole gambit wouldn't make any sense if the banks wanted to lend the money out. You and the small business down the street would certainly be paying far north of 25 basis for a loan from your friendly local banker, or even from the unfriendly zombie variety.

A quick perusal of any bank's CD rates will tell you they are saying no to loan applicants much more than yes. Banks have every reason to take the 25 basis points when loan-to-deposit ratios are at a multi- decade low of 71%.

According to the FDIC's "Quarterly Banking Profile," deposits grew in the second quarter by $88.1 billion. The report stated, "Much of the growth in domestic deposits ($71.7 billion) consisted of noninterest-bearing transaction deposits with balances greater than $250,000 that are temporarily fully covered by the FDIC."

Banks made $34.5 billion in the second quarter, the 12th-straight year-over-year increase in quarterly income. That all sounds peachy, except banks are juicing their earnings by taking money out of their loan-loss provisions to make their numbers.

Banks set aside $14.2 billion for bad loans in the second quarter of this year, a $5 billion decline from the same time last year. That is the smallest quarterly total in five years. Banks have reduced their reserves for nine straight quarters.

Also, noninterest income rose, spurred by the gain on loan sales and on fair values of financial instruments. Both are direct beneficiaries of Bernanke's zero interest rate policy.

In other words, when it comes to the core business of banking, the numbers don't look so hot. Net interest income actually declined $287 million in the second quarter and the average net interest margin was 3.46%, down from 3.61% a year previous.

Loan charge-offs were down $8.4 billion from a year ago, another driver of earnings improvement. However, while the industry's "coverage ratio" of loan loss reserves to noncurrent loans inched up from 60% to 60.4% between March 31 and June 30, this continues to be far below a healthy coverage ratio of more than 100%.

Reuters reports that some people at the Fed have suggested that cutting the interest on excess reserves is a policy option. Why doesn't the Fed do this? Fed officials say the central bank is concerned that such a move would hurt returns on money market funds that could destabilize financial markets.

Here is proof from the minutes of the Fed's July 31-Aug. 1 meeting:

"While a couple of participants favored such a reduction, several others raised concerns about possible adverse effects on money markets."

It hardly seems possible that this 25 basis point subsidy is required to keep money market funds from breaking the buck.

If this is true, these are indeed dangerous times, more dangerous than most people imagine. It means that the only way banks can really make money is through the "return-free risk" that Jim Grant often writes about. The Fed, therefore, has concocted this entire policy (TAG, ZIRP, and QE3) for one reason only. It's not about jobs and growth. The goal is to keep the banking system afloat. 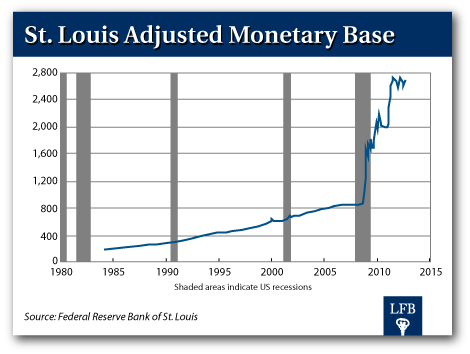 FDIC board member Thomas Hoenig made the point clearly in a speech to the Exchequer Club.

"In television commercials, one large bank [Citibank] is advertising its celebration of 200 years in business. I congratulate them. It is well documented that this bank has received US government support four times in the last 100 years.

"We have slowly, perhaps unintentionally, expanded the safety net and its subsidy beyond what is justified to serve the long-run interests of the economy. What started as a means to providing stability to the payments system and intermediation process – both vital to our economy – has become a tool for leverage and a subsidized expansion into activities that has led to greater instability."

The banks have become like the post office, Fannie Mae, Freddie Mac, and the car companies – public utilities that survive and thrive through the force of government power and privilege. The tiny tweaks that keep us baffled are simply the required scaffolding that government must erect to keep its friends and supporters in business.

Inevitably, these temporary crutches always become permanent, only to be supplemented with more of the same during the next crisis. And everyone, including Bernanke, knows that there will be a next crisis.