END_OF_DOCUMENT_TOKEN_TO_BE_REPLACED

Or so traders have now come to believe of 2016 Fed action...

BACK on 16 December 2015, the Federal Reserve voted to increase short-term interest rates for the first time in almost a decade, writes Gary Dorsch at Global Money Trends.

Setting the new target range for the federal funds rate at between 0.25% and 0.50%, it aimed for the mid-point at 0.375%. Policy makers separately published the "Dots Matrix" that is designed to provide "forward guidance" to traders, about the future path of interest rates.

In December, the Fed projected a +1% increase in the fed funds rate to 1.375% by the end of 2016, implying four quarter-point increases in 2016, based on the median estimates from 17 Fed officials.

"The committee judges that there has been considerable improvement in labor market conditions this year, and it is reasonably confident that inflation will rise, over the medium term, to its +2% objective."

The rate hike to 0.375% drew to a close an unprecedented period of near-zero per cent interest rates that were part of the Fed radical policies that increased the value of the stock market by $18 trillion, in the wake of the most devastating bear market since the Great Depression.

The Fed lowered the fed funds rate to 0.125% in December 2008, three months after the collapse of investment bank Lehman Brothers and 10 months before the US jobless rate peaked at 10%.

Two weeks prior to the 2015 rate hike, Fed chief Janet Yellen explained the rationale for "Lift-off" from the "Zero Interest Rate Policy" (ZIRP).

"If the Fed would delay the start of policy normalization for too long, we would likely end up having to tighten policy relatively abruptly to keep the economy from significantly overshooting both of our goals. Such an abrupt tightening would risk disrupting financial markets and perhaps even inadvertently push the economy into recession. Moreover, holding the federal funds rate at its current level for too long could also encourage excessive risk-taking [ie, inflating bubbles in the stock market] and thus undermine financial stability [trigger a sharp sell-off in the equity markets]."

Ms.Yellen sounded uncharacteristically hawkish on 3 December, and set a low bar for justifying future rate hikes, saying the US economy would only need to add as little as 100,000 jobs a month to cover new entrants to the workforce. "To simply provide jobs for those who are newly entering the labor force probably requires under 100,000 jobs per month, with anything above that helping absorb those who are unemployed, discouraged or had dropped out of the labor market," Yellen told the Congress' Joint Economic Committee, said in a question and answer session.

Three weeks after Fed Lift-Off, on 6 January 2016, the Fed's shadow chief, Stanley Fischer, told the Dow Jones' Marketwatch that the markets' "expectation of 2 Fed hikes this year is too low" and instead, he said that four rate hikes was in the ballpark." He went on to tell CNBC's Squawk Box:

However, over the next two days, the Dow Jones Industrial index plunged 750 points, as a wave of panicked selling knocked the stock market to its worst start to a year going back to 1928.

The dismal start to the New Year was triggered by a meltdown in China's stock markets. The price of crude oil fell to its lowest level since 2004, the latest blow to US energy companies. The Dow and S&P-500 index ended 6% lower for the week, the Nasdaq composite fell even more, down 7.3%.

That index is heavily weighted with technology and biotech companies, both of which were high-fliers the previous year. In the face of turmoil in the Chinese markets, the S&P500 index had its worst five-day start in its history, ending down almost 6%. Investors dumped stocks amid a rout that wiped off $2.3 trillion from global equity markets. Banks and technology companies paced the retreat, and energy shares in the S&P500 Index declined to a four-year low. 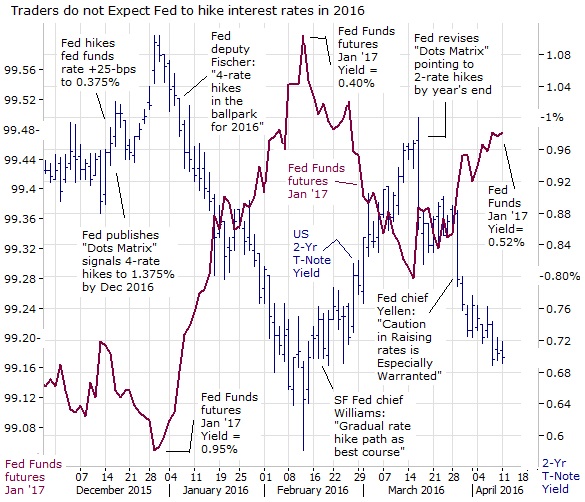 Come 17 February, one of the Fed's most vocal advocates of lift-off from ZIRP, St.Louis Fed chief Jim Bullard, declared it "unwise" to move forward with the plan to hike the fed funds rate in March, given the volatility in the stock markets.

Bullard argued steadily last year for the Fed to tighten policy and sounded alarms over the risk that continued low rates would create dangerous asset bubbles. But amid the turmoil in the marketplace, Bullard suddenly did an about face, saying:

"I regard it as unwise to continue the normalization strategy, because falling equity prices and other tightened financial conditions [ie, sharply higher junk bond yields] have made the risk of asset bubbles less of a concern. [The Fed now has] more leeway to take its time with rate hikes."

With the Fed backing away from its plans to hike the fed funds rate in 2016, the Dow average and the S&P 500 index, which were down more than -10% from the start of the year, roared back in March.

In turn, on March 16, Fed officials reduced estimates of how much they expect to raise short-term interest rates in 2016 and beyond, nodding to lingering risks from financial-market volatility. A revised "Dots Plot" showed officials expect the Fed Funds rate to creep up 50 basis points to 0.875% by the end of 2016, according to the median projection of 17 officials.

That would mean two interest-rate increases this year, compared with four projected increases when officials last met in December, and implies the Fed is looking toward its next rate increase in June.

It was Jeffrey Gundlach, the widely followed investor who runs DoubleLine Capital, who said it best; it's become obvious Fed officials are seeking guidance from markets.

As of today, the Fed funds futures contract for January '17 is yielding 0.54%, signaling a very high likelihood of a single 25 basis point Fed rate hike to 0.625% by year's end.

"Given the economy we're looking at, I think it would be two rate hikes this year," said Chicago Fed chief Charles Evans on March 31st. "It's not really critical when those take place. I would sort of say one in the middle of the year and one at the end of the year," he went on, adding the Fed could move earlier.

Still, skeptical traders have been fed a steady dose of hawkish rhetoric from Fed officials, for most of this year, but have looked through the smoke screens, and are betting the Fed will wait until after the Nov 8th elections, before squeezing in one 25 basis-point rate hike around December 2016.

That was made clear on April 11, when it was revealed that Fed chief Yellen held an emergency meeting with president Obama in the Oval office. The White House spokesman explained the meeting was to allow the two to "exchange notes" and talk about the state of the US economy.

Most crucially, Obama said he "was pleased with the way Yellen had fulfilled her job". That is to say, engineered near-record high stock prices.