END_OF_DOCUMENT_TOKEN_TO_BE_REPLACED

Even in US Dollar terms. Thank the Fed's non-QE...
DEUTSCHE BANK maintains a strict dossier on all the world's asset classes, writes Brian Maher, managing editor of The Daily Reckoning.
Stocks, bonds, real estate, commodities – 38 assets, A through Z – Deutsche Bank has them under ruthless and unshakable surveillance.
Last December's spywork revealed this arresting conclusion:
93% of all the world's assets traded negative in 2018.
Not even in the fathomless depths of the Great Depression did so many global assets wallow in red.
But last year is last year. Scroll the calendar one year forward...to today.
What do we find?
We find a full 180-degree turning around.
Each and every asset Deutsche Bank tracks – all 38 – trade positive this year.
Affirms Deutsche Bank's Craig Nicol:

"All 38 assets in its tracking universe have posted positive year-to-date (YTD) returns in both local currency and Dollar terms."

To what earthly energy can we ascribe this complete and dramatic reversal?
The answer is obvious to anyone with eyes willing and able to see.
The Federal Reserve was increasing interest rates and trimming its balance sheet in 2018. Last December Jerome Powell announced the business would proceed uninterrupted.
That was when the stock market fell into open and general revolt.
By last Christmas Eve...it was a whisker away from "correction".
And so Jerome Powell dropped his weapons, hoisted his surrender flag...and came out hands in the air.
Wall Street had him.
Safely under lock, safely under key...Powell proceeded to lower rates three instances this year.
What is more, he called a premature halt to the quantitative tightening he had previously declared on "autopilot."
Who can then be surprised that the Dow Jones industrial average has advanced 4,000 points this year?
Or that the other major indexes have marched with it?
But our tale does not conclude here. Instead, it takes a meandering twist down a side road...
Rate cuts only partially explain this year's asset extravaganza. The termination of quantitative tightening only partially explains this year's asset extravaganza.
Can we credit a general optimism on trade?
Perhaps partially – but only partially.
Whatever trade gives, trade takes back. The promised trade deal has proved an endless frustration, a pretty plum dangled always beyond reach, a Christmas morning put off again, again and again.
For a full and complete explanation of the year in assets, we must peer deep within Deutsche Bank's report.
There we will find this chestnut sandwiched within:
November posted some of the year's loveliest asset gains. November, that is, hoisted all boats on its rising tide.
Why November?
For the answer we must first revisit September...and the "repo" market.
Overnight lending rates leapt to 10% as liquidity ran dry – a high multiple of the federal funds rate then prevailing.
The Federal Reserve instantly hosed in emergency liquids to suppress the insurrection.
Mr.Powell declared the operation "temporary". But on and on it went – into October, into November (and into December).
By November Mr.Powell and his minions at the New York Federal Reserve emptied in some $280 billion of liquidy credit.
They shrieked, howled and fumed that these "open market operations" were in no way quantitative easing.
Yet these activities inflated the Federal Reserve's balance sheet...precisely as if they were quantitative easing itself.
From its maximum $4.5 trillion enormity, the quantitative tightening of 2018-19 siphoned down the balance sheet to $3.8 trillion.
But along came September...and its temporary open market operations.
By mid-November they reinflated the balance sheet to $4.04 trillion. Let us reintroduce the evidence we initially entered into record Nov. 15: 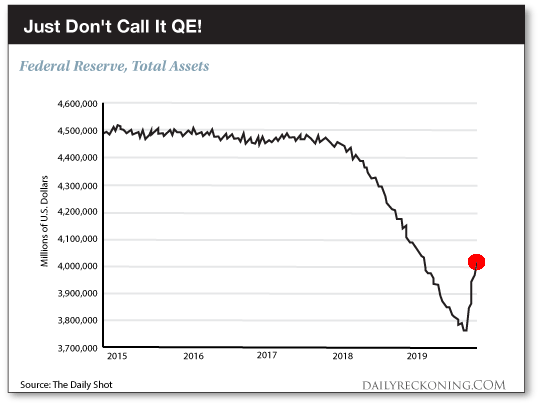 In all, the Federal Reserve has inflated the balance sheet $293 billion in under three months.
When was the last occasion the Federal Reserve carried on with such frantic fanaticism?
October 2008 – in the wildest psychosis of the financial crisis.
If you seek a thorough explanation for November's asset surge, here you are.
But perhaps you demand further evidence. Then further evidence you shall have.
Here is the pistol, smoke oozing from its barrel...
The S&P turned in only one negative week these past two months. That was the same week – and the only week – that the balance sheet contracted.
Mainstream displays of lucidity and insight are rare and shocking. But here you have one, by way of CNBC's Carl Quintanilla.
Dated Nov. 18:

"Whether it should be considered QE4 or not, in the eyes of the market it's just semantics. Markets view any increase in the size of the Fed's balance sheet as QE and the $250 billion increase in just two months is no doubt helping to lift stock prices."

Hence November's outsized influence on assets in general. Hence we find all 38 asset classes Deutsche Bank tracks positive on the year.
But here is the danger:
The Federal Reserve's liquidity may be kerosene that ultimately fans a conflagration.
In Bank of America's telling, Fed support of repo markets raises systemic financial risk.
That is because it allows excess leverage to pile up. If it comes tumbling down, if the system deleverages...it may strike the match on one royal blaze.
Bank of America's Ralph Axel:

"There may be a situation in which banks want to deleverage quickly, for example during a money run or a liquidation in some market caused by a sudden reassessment of value as in 2008...[So] the Fed's abundant-reserve regime may carry a new set of risks by supporting...overly easy policy (expanding balance sheet during an economic expansion) to maintain funding conditions that may short-circuit the market's ability to accurately price the supply and demand for leverage as asset prices rise."

Meantime, the Federal Reserve pours forth an average $5 billion of flammable liquid each day.
And someone, somewhere, is holding a match.