END_OF_DOCUMENT_TOKEN_TO_BE_REPLACED

SINCE the election, all the talk in the US has been about the so-called "Fiscal Cliff," a wicked combination of $500 billion of tax increases and $110 billion of spending cuts that will take effect next year, unless the Republicans in the House and the Obama White House can agree on ways to turn the cliff into the "Fiscal Hill", writes Gary Dorsch at SirChartsalot.com

Both political parties recognize the need to pare down the size of future budget deficits, in order to maintain the solvency of the country over the longer-term. There is no way to avoid the fiscal cliff, and if a recession ensues next year, both sides want to be able to win the public relations war, by pinning the blame for the fallout on the other political party.

The basic Republican framework for tackling the fiscal cliff calls for a reduction in spending on entitlements and capping social welfare programs. The fiscal cliff also provides tax reformers with a golden opportunity to overhaul the tax code, by eliminating many of the deductions and credits that reduce tax payments from individuals and corporations by about $1 trillion per year.

Republican leaders are willing to eliminate many loopholes that disproportionately benefit the higher-income earners and scale back deductions for the business sector that earned $1.5 trillion in after-tax profits in the past 12 months.

"In a good-faith effort to make progress on boosting the economy and government's long-term solvency, Republicans like me are open to new revenue in exchange for meaningful reforms to the entitlement programs," said Senate Minority Leader Mitch McConnell (R-Ky.) on Nov 13. 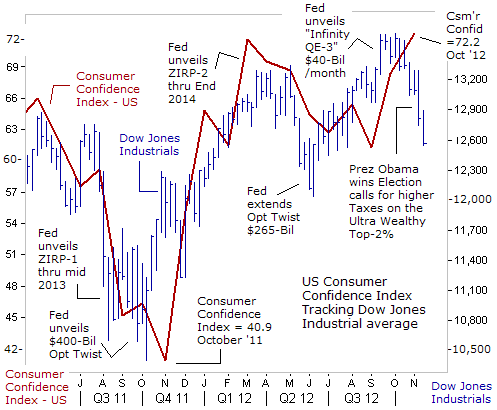 Mr Obama owes a big debt of gratitude to Fed chief Ben Bernanke, who helped to engineer his re-election, by masterminding a improbable 3,000-point rally in the Dow Jones Industrials from the Oct 4, 2011 low of 10,500, to above 13,500 in Sept '12. The rally helped to boost US consumer confidence, and lifted Obama's approval rating with a sizeable segment of the voting population. However, now that Obama has been re-elected to a second term, his emphasis is already shifting 180 degrees, from boosting the fortunes of the ultra-wealthy, - that's heavily tied-up in the artificially inflated - stock market, - to waging war on the ultra-wealthy, by aiming to hike their tax rates on dividends, capital gains, and ordinary income. Such a move is expected to raise about $80 billion in extra revenues for the US Treasury, according to some estimates.

Mr Obama will begin talks on the Fiscal Cliff with a proposal to raise $1.6 trillion in new tax revenue, with 80% of the tax increases paid by high-income earners, and 20% from Corporate America. That means the top-1% would pay $121,000 more in taxes each year. The top 20% of income earners would pay an average $14,000 more each year. That's important, because the top-1% of the wealthiest Americans own 38% of the stocks traded on the NYSE and Nasdaq. The next 9% tier of wealthy investors control 44% of the total shares. Jacking up taxes on capital gains and dividends and eliminating tax loopholes for Corporate America has spooked the top-10% richest investors, into dumping their stocks before year end.

"When it comes to the top 2%, what I am not going to do is extend further a tax cut for folks who don't need it which would cost close to a $1 trillion. The math does not work, in some proposals to raise taxes on the wealthy by just closing tax loopholes," Obama said on Nov 14th. Obama said he is "very eager" to reform the tax code, (i.e. eliminate many of the tax loopholes for Corporate America), and said entitlements like Medicare and Social Security need a "serious look as part of a deficit deal." While there is no sympathy for the ultra-wealthy, the broader US economy would be at risk of a renewed downturn, because tackling the fiscal cliff would require some degree of "fiscal austerity," just like in recession ravaged Europe. 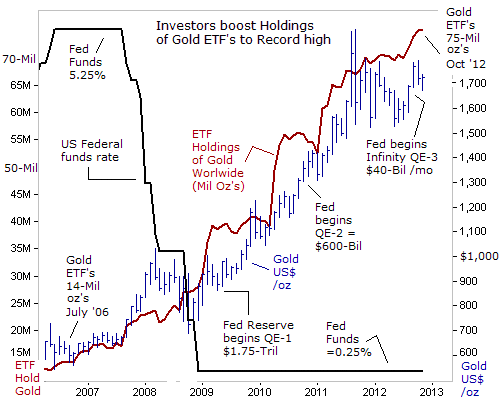 At the end of the day, no matter what amount of austerity is agreed upon, the US federal government is still expected to run a budget deficit of $700 billion or more. In order to finance the shortfall, traders can expect the Obama White House to call upon the political puppets that sit at the Federal Reserve, to create hundreds of billions of electronically printed US Dollars through its Infinity QE3 program. That message has already been transmitted to the Fed.

At the Fed's October meeting, a number of Fed officials spoke about the need to step-up Treasury bond purchases next year. Fed deputy Janet Yellen said that the federal funds rate could stay locked near zero-percent until early 2016 in order to help keep the US Treasury's financing costs as low as possible. Through the Fed's totalitarian control of credit, financing the US Treasury can be done cheaply in spite of the mushrooming of the national debt, until an inflection point is reached, where hyper-inflation begins to take-off.

The Fed slashed the overnight federal funds rate to near zero-percent in December 2008 and has pumped $2.3 trillion of freshly printed Dollars into the money markets. In turn, investors seeking a safe haven from the debasement of paper money, turned to Gold, bidding-up the price of the yellow metal from $700 /oz four years ago, to above $1,700 /oz today. The price of Silver nearly quadrupled from $9 /oz to above $32 /oz today. Gold bugs and silver bulls alike can breathe a big sigh of relief, knowing that Bernanke will have his fingers on the printing press in the year ahead. Since Sept 13, the Fed has begun printing $40 billion per month, an open-ended scheme, with no pre-determined timeline. Mrs Yellen, an addicted money printer, advocates a "highly accommodative policy," even "if inflation overshoots the Fed's 2% inflation target objective for several years," she said.

Many investors have turned to exchange traded funds (ETF's), listed on the stock exchanges which issue securities backed by physical holdings of Gold. Demand for these funds has increased five-fold since July 2006. Collectively, they hold 75-million ounces in the vaults, - that's up from 14-million ounces in July of 2006. Gold is a highly liquid vehicle that can preserve an investor's purchasing power over the longer-term. In fact, the central banks that are the world's most notorious money printers were net buyers of 252 tonnes of Gold in the first half of 2012, after purchasing 456 tonnes in the year before.