END_OF_DOCUMENT_TOKEN_TO_BE_REPLACED

Panic in the bond market courtesy of pointlessly scanning the Fed minutes...
WHILE the mainstream media instigates reasons why we should give a damn about what people who have little control over the Treasury bond market were thinking at the Fed's last meeting, writes Gary Tanashian in his Notes from the Rabbit Hole, why don't we just tune it all out and manage the markets instead? 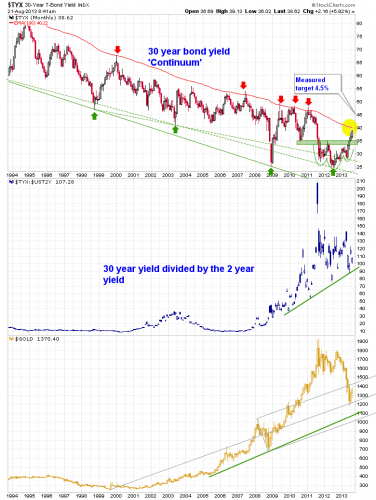 The top panel shows the 30-year US bond yield marching toward the traditional limiter, otherwise known as the 100-month exponential moving average. The pattern measures to 4.5% or so, so there could be a spike above and a hell of a lot of hysteria at some point.
That's the collective markets; 98% hype, hysterics and emotion and 2% rational management. Either the 30-year yield is going to do something it has not done in decades (break and hold above the EMA 100) or it is not. Simple.
The relationship between long term bonds (30 year) and short term bonds (2 years) in the middle panel is currently negatively diverging gold as the ratio has dropped this month. Again, we wonder is gold (bottom panel) leading the curve this month or should gold bugs take caution? I think gold is leading the curve, but it bears watching. The relationship became distorted in second half, 2012.
As for gold, it probably bottomed at the end of June. That is because the sold out condition of the sector (read: Paulson puking GLD, hedge fund net short positions, India's antagonism toward its would-be gold buyer citizens, etc. etc. etc.) was simply historic.
Really, just dialing down all the noise of the last 2 years it was a grand and climactic panic IN to gold in 2011 by the global public in the face of the Euro's supposed Armageddon. Everyone had bought and then it was time for the bleeding out of this emotional money.
The bleeding went on longer than I originally thought it would, but that is why we do ongoing work to interpret things every step of the way. Hey, no harm no foul. A little patience and ongoing perspective and now we have what appears to be a purified asset class, free of unhealthy sponsorship.
Back to the chart's top panel. China is a net seller of US Treasury bonds. Japan is a net seller of US Treasury bonds.

As we have been noting every step of the way T bond yields are a function of supply and demand. The global system endured a solid decade of net inflows of global funds into the T bond market. Now it appears the tide may be going out. Hence, interest rates all along the curve – save for the officially manipulated ZIRP on the Fed Funds – are going up.
It is all normal to free market participants; just another phase. It is only abnormal if you buy in to the idea that the Fed is in control and can remotely operate the financial markets indefinitely; if you buy in to the idea that the Fed decides when the cycles are to change.
If you look at it a certain way, it'll tickle your funny bone as you listen to Huey, Dooey and Louie jawbone 'Taper' in the media or as you review what a bunch of bureaucratic clerks had to ruminate about at the last Federal Reserve meeting...