END_OF_DOCUMENT_TOKEN_TO_BE_REPLACED

JEROME POWELL dangled the morsel last week – rate cuts are on the way, writes Brian Maher in The Daily Reckoning.

The major indexes were instantly up and away.

They lost momentum after the President intimated he may take a swing at Iran for downing a US drone.

"You'll soon find out" was his response when asked if the US would retaliate.

The bulls nonetheless won the day. The Dow Jones was up 249 points at closing whistle.

Combine the prospects of vast central-bank easing with possible fireworks in the Persian Gulf...and you have your answer.

What about the bond market?

And so the infinitely expanding gulf between stock market and bond market widens further yet.

One vision is bright, cheery, trusting. The other is dark, dour...and morose.

Our money is on the bond market.

We have furnished ample evidence that recession is likely on tap within three months of the next rate cut.

Here analyst Sven Henrich reinforces our deep faith in the calendar of misfortune:

"Every single time the Fed cut rates when unemployment was below 4%, a recession immediately ensued & unemployment shot to 6-7%. Again: Every. single. time."

The United States unemployment rate presently stands at 3.6% – the lowest in 50 years.

But this unemployment rate below 4% is a false prize, a sugar-coated poison...a gorgeously wrapped gift box containing a time bomb.

Unemployment previously slipped beneath 4% in April 2000 – at the peak of the dot-com delirium.

The economy was in recession by March 2001.

The economy was sunk in recession shortly thereafter.

The pattern stretches to the 1950s.

The proof, clear as gin...and equally as stiff: 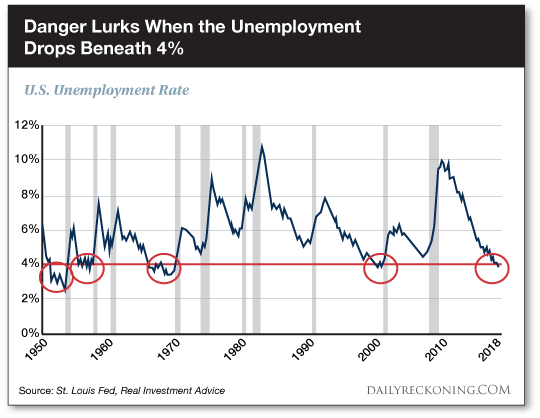 And unemployment often bottoms nine months before recession's onset...according to the National Bureau of Economic Research.

Meantime, it is 10 years into the present economic "expansion." Next month will establish a record.

An expanding economy is generally a time of surplus.

It is a time to store in reserves, to squirrel away acorns, to save against the rainy day – the inevitable rainy day.

These savings will see you through.

But during this economic expansion, during this season of bounty...the United States has only sunk deeper into debt.

The cupboards are empty.

And interest payments on the debt alone will likely eclipse defense spending by 2025.

Come the inevitable recession, Uncle Samuel will plunge even deeper into debt.

That is, he will reach even further into the future...to rob it for our benefit today.

Deficits may double – or more.

How is the business at all sustainable?

But it's not only a doddering old uncle going under the water...

Corporations have loaded themselves to the gunwales with cheap debt – cheap debt coming by way of the Federal Reserve.

First-quarter nonfinancial corporate debt increased to $9.93 trillion. That is a record.

And this we learn from the Treasury Department:

Today's nonfinancial corporate debt-to-GDP ratio is the highest since 1947...when records began.

And here we spot a straw swaying menacingly in the wind...

Fitch informs us nearly $10 billion of high-yield corporate bonds have already defaulted in the second quarter – double the amount of first-quarter defaults.

"Whatever the cause [of the next recession] may be, the acute point of pain will be in corporate credit."

Finally we come to the fabulously and grotesquely indebted American consumer.

Total US consumer debt notched $14 trillion in the first quarter – exceeding the roughly $13 trillion before the financial crisis.

Twenty-three per cent of Americans claim that life's essentials – food, rent, utilities – constitute the bulk of their credit card purchases.

They already groan under the load – and the economy is still expanding.

Meantime, the cost of a middle-class lifestyle has surged 30% over the past two decades.

But Pew Research reports the average American worker wields no more purchasing power today...than he did 40 years ago.

That is, he has jogged in place 40 years.

The past 10 years of central bank intervention on a grand and heroic scale have worked little benefit.

The coming recession will bring yet more intervention – on an even grander and more heroic scale.

But why should we expect it to yield any difference whatsoever?

For the overall view, we turn to Mr.Sven Henrich:

"The grand central-bank experiment of the last 10 years has ended in utter and complete failure. The games of cheap money and constant intervention that have brought you record global debt to the tune of $250 trillion and record wealth inequality are about to embark on a new round...The new global rate-cutting cycle begins anew before the last one ever ended. Brace yourselves, as no one, absolutely no one, can know how this will turn out...

"We are witnessing a historic unraveling here. Everything every central banker has uttered last year was completely wrong. Every projection they made over the last 10 years has been wrong...Why place confidence in people who are staring at the ruins of the policies they unleashed on the world and are about to unleash again?

"All the distortions of 10 years of cheap money, debt, wealth inequality, zombie companies, negative debt...will all be further exacerbated by hapless and scared central bankers whose only solution to failure is to embark on the same cheap money train again. All under the banner to 'extend the business cycle' at all costs. Never asking whether they should nor considering the consequences. But since they are not elected by the people and face zero consequences for failure, they don't have to consider the collateral damage they inflict."

Unfortunately, the rest of us do.