END_OF_DOCUMENT_TOKEN_TO_BE_REPLACED

Big 'thank you!' from silver too. But now caution advised...

The U.S. FEDERAL RESERVE has been trying to promote inflation, writes Gary Tanashian in his Notes from the Rabbit Hole.

That is not the guy with the tin foil hat speaking, it is direct from FOMC statements targeting a higher inflation level, which is another way of saying they are targeting a lower US Dollar level. From this we should lean towards that which would benefit from a declining USD.

Precious metals (led by silver) are a prime beneficiary, with oil and some commodities remaining firm despite pressure on stock markets as corporate performance and economic signals continue to fade.

Interestingly, the Bank of Japan played a big role in the 'inflation trade' last week as Kuroda signaled, temporarily at least, that it was the US's turn to devalue in the global game of currency Whack-a-Mole in which BoJ was a star figure for so long. In one week, the US Fed rolled over and played dead (again) and the Bank of Japan surprised markets by refusing to intensify its ongoing inflationary operation.

One wonders how well coordinated these policy bodies are. Recall that while BoJ and ECB were softening global investors up to the idea of globally pervasive negative interest rate policy (NIRP), the US Fed was (in my opinion) pretending to be a beacon of sound policy in making a pathetic move of +1/4 on the Fed Funds Rate. Now that Goldilocks has long-since left the story, the Fed can pop its head up and promote inflation itself, with the BoJ mole standing down. Here is a chart of JPY/USD overlaid with gold and silver...

All 3 went up last week as policy was beneficial. Gold bugs and commodity gurus may rail against the Fed, but as of now and ever since USD/JPY topped out and began a downtrend per our weekly chart, the Fed has been on their team. We are finding out now just how significant this change to the macro backdrop actually was.

Yet an even bigger picture view injects some caution about the idea of continued USD decline vs. Yen. It is nearing a support zone in the 100 to 105 area.

Let's retreat to our old monthly USD-Yen analog chart created a few years ago. In this macro chart we speculated about the Head-and-Shoulders top sending Yen on a similar journey to the USD (of last decade) and after something that felt like an eternity, Yen finally bottomed at the equivalent of USD's late 2004 low, which sprung a bounce.

The target for Yen is approximately 98 if it gets through short-term resistance. The target for USD, if it loses current support (2015 low) is around 89. 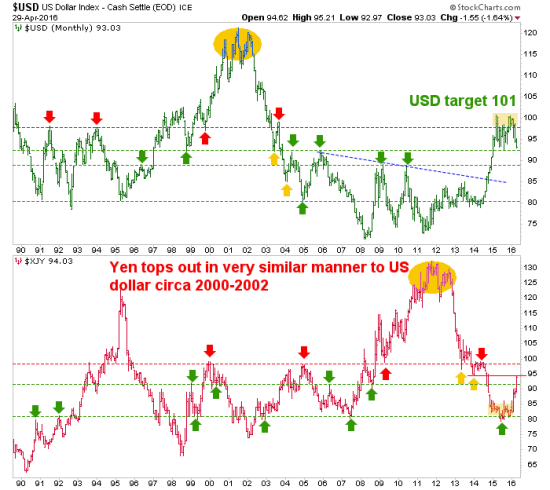 Silver, which gets gold bugs excited when it runs like it is currently, is picking up on US Dollar weakness and making a jail break. But the weekly silver chart we reviewed in Friday's update (still currently for subscribers only) shows very key long-term resistance for silver.

The 'inflation trade' rally (or at least this leg of it) is maturing rapidly. As we will review once again in the next segment, the next upside target for HUI is now loaded but risk is rising with the precious metals complex and the 'inflation trade' as it always does during a euphoric upward burst in any market.

If for example, HUI were to hit the upside target (gold stocks are not about inflation, fundamentally) while USD and Yen hit their targets, extreme caution would be advised. As it is, caution is now advised generally speaking.