END_OF_DOCUMENT_TOKEN_TO_BE_REPLACED

Ready for US rates to rise? The bond market sure is...
The STORY begins in May 2003, writes Gary Dorsch in this excerpt from Global Money Trends, when Alan Greenspan – nicknamed the "Maestro" – roiled the US T-bond market.
He hinted that the Fed might move to lower the fed funds rate towards zero%, and could start to buy long-term bonds, to fight off the possibility of the US economy from falling into the "Deflation Trap".
Thus Greenspan did threaten to unleash "Quantitative Easing during his tenure. The threat of QE lowered the yield on the US's 10-year Treasury from around 4% in April 2003 to as low as 3.10% in June '03.

"Should it turn out that – for reasons that we don't expect, but that we certainly are concerned may happen, – the pressures on the short-term markets drive the federal-funds rate down close to zero, that does not mean that the Fed is out of business on the issue of further easing," Greenspan warned on May 21st that year.
"Even though short-term rates are at 1.25%, longer-term rates are significantly above that. We do have the capability – should that be necessary – of moving out on the yield curve, essentially moving long-term rates down."

The Fed would accomplish that by buying Treasury securities with longer maturities and setting a cap on their yields (ie, QE).
However, two months later, on 15 July 2003, in testimony to a Congressional panel, Greenspan whipsawed T-bond traders by doing a 180-degree reversal, saying the Fed wouldn't have to resort to QE.

"The Fed stands prepared to maintain a highly accommodative stance of policy for as long as needed to promote satisfactory economic performance, and has substantial room to keep lowering overnight rates. However, Fed members have concluded it is most unlikely the Fed would need to take unconventional steps such as buying Treasuries to lower market rates."

Instantly following his comments, the benchmark 3.375% Treasury note maturing in May 2013 plunged 2-points lower, pushing the yield up 23 basis points to 3.95%.
Bond yields continued to surge higher and by the middle of August 2003, the 10-year yield hit a high of 4.65%, and far above the cycle low of 3.10%, hit just two months earlier. 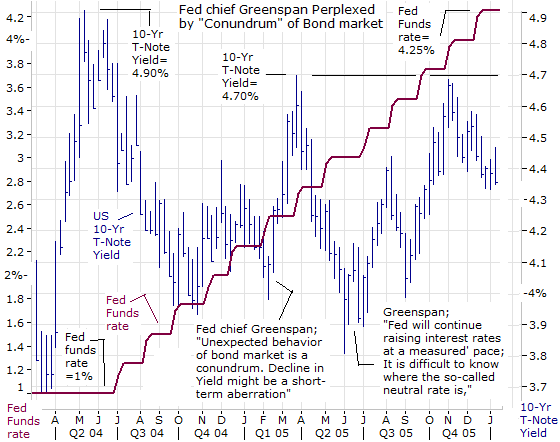 In May 2004, one month before the Fed actually began its rate hiking campaign, the yield on the 10-year Treasury had already surged to as high as 4.95%, and was light years ahead of the central bank.
The message coming from the Fed was the same script that we hear today:

"Leeping interest rates too low for so long could cause problems. Some members are concerned that keeping monetary policy stimulative for so long might be encouraging increased leverage (ie; borrowing), and excessive risk-taking, (ie; bidding up stock prices). Such developments could heighten the potential for the emergence of financial and economic instability (ie; bubbles) when policy tightening is necessary in the future."

When the Greenspan Fed finally initiated its first baby step rate hike to 1.25% in June of 2004, the 10-year yield was trading around 4.65%. Yet what was most confusing and surprising to Fed officials, at the time, the yield on the 10-year continued to slide 65-bps lower towards 4%, even as the Fed continued raising the fed funds rate higher to 1.75% by Sept 2004.
In fact, after 15 straight Fed rate hikes to 4.75%, the 10-year yield was still hovering around 4.65%, where it was when the Fed started the tightening campaign.
Greenspan called this situation a "conundrum", since the 10-year yield was little changed at 4.65%, even though the Fed had lifted the fed funds rate 350-bps higher.
The key lesson is, most of the increase in long-term bond yields, in anticipation of a tightening cycle, has already materialized, before the Fed even takes its first baby-step rate hike.