END_OF_DOCUMENT_TOKEN_TO_BE_REPLACED

What if the Fed now holds fire...?

FED RATE CUTS have been the driving force of the recent gains in precious metals, writes Jordan Roy-Byrne at TheDailyGold.

This is not a surprise to our readers, as since 2018 we argued that a shift in Fed policy from rate hikes to rate cuts would springboard the next big move. History argued the same.

The market showed a roughly 90% chance the Fed would cut rates this week, which indicates the market had essentially already priced in the rate cut.

The potential for a pause in the rate cuts could be why gold, silver and mining shares are all off their summer highs, despite an imminent rate cut.

This is why we expect the precious metals sector will continue to correct and especially in terms of time. It remains to be seen whether the correction continues as a price correction or morphs into a bullish consolidation.

With respect to the Fed, if they don't raise rates as inflation rises then that causes a steepening yield curve as well as a decline in real interest rates. Those things are bullish for precious metals.

In the chart below we plot the inflation expectations ETF RINF followed by the TIP to TLT ratio, the CRB (commodity prices) and the Yield Curve.

Note how inflation expectations increased in 2016 and until the middle or end of 2018. It was also during this time that the yield curve flattened as the Fed raised rates. 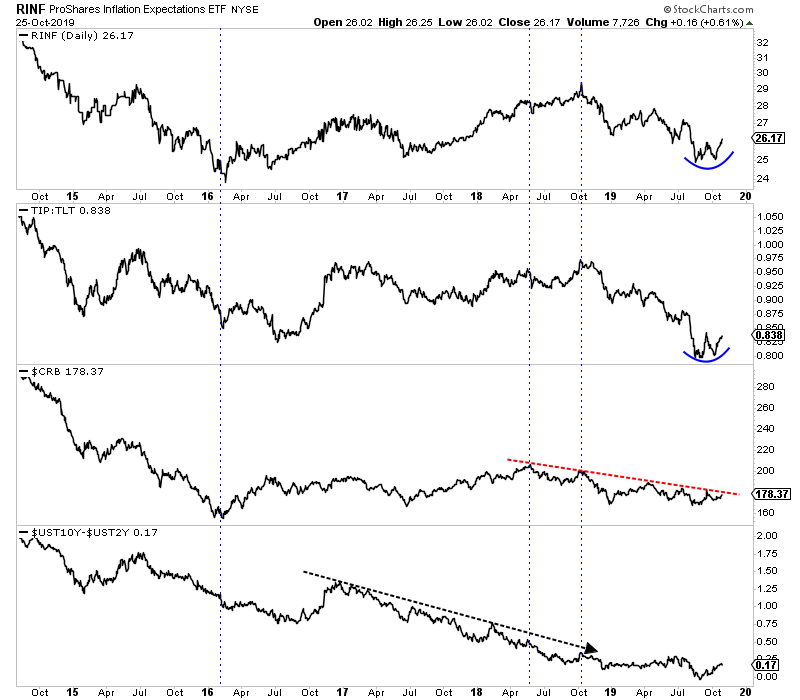 The combination of rising inflation and rising inflation expectations was not bullish for precious metals in 2017 and 2018 because the Fed raised rates, the yield curve flattened and real interest rates declined.

At present we can see RINF and TIP vs. TLT have formed double bottoms while the CRB is on the cusp of breaking its downtrend and the Yield Curve has rebounded.

Simply put, if inflation and inflation expectations trend higher like in 2017 and 2018 but the Fed doesn't raise rates, it is bullish for precious metals. In this scenario, Silver will outperform Gold and the juniors would outperform also.

Over the past week or so there have been a few positives with respect to the mining stocks. Both GDX and GDXJ formed mini-double bottoms while the silver stocks have performed even better.

We do need to keep an eye out for how the miners perform if the Fed indicates a pause is coming. Their performance over the weeks ahead could give us an early hint as to how much longer the correction will last.

In the meantime, we have been focusing on identifying and accumulating quality juniors with significant upside potential in 2020. To learn the stocks we own and intend to buy that have 3x to 5x potential, consider learning more about our premium service.