END_OF_DOCUMENT_TOKEN_TO_BE_REPLACED

Has the Fed won its war on deflation...?

TAKE A LOOK at the chart of America's large cap benchmark stock index on the S&P 500, writes Dan Denning for the Daily Reckoning Australia.

It made a five-year high on Friday in the US. 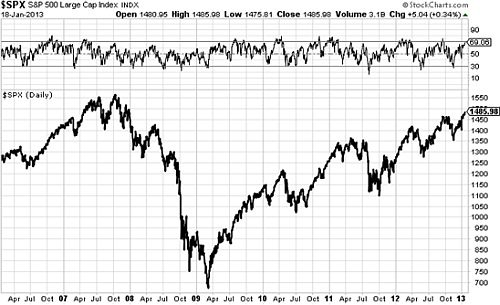 The index is not quite back to pre-crisis levels. But the question has to be asked: is it over? Is the worst behind us? Has the Fed's war on deflation been won?

It's not really a war on deflation. It's a war on falling stock prices and weak economic growth driven by a vast overhang of unproductive public and private debt. And in any event, it hasn't been won. But something is clearly happening. So what is it?

Well, by systematically lowering bond yields, the Fed has lowered the return on all fixed income investments. Those low yields make the paltry earnings growth in the stock market look attractive by comparison, or at least less ugly. The result is a reflationary rally in the S&P 500, taking it to a five-year high.

What comes next, though, is the counter attack by everyone else who is NOT the Fed. The S&P rally benefits US investors and Dollar-based speculators. It all requires a weak US Dollar to work. But that same weak US Dollar creates problems for other countries whose currencies appreciate. That appreciation makes export growth and GDP growth harder to achieve.

The whole world is fighting over the same customers. And everyone wants to use a cheap currency to win. But not everyone can win. As in the movie Highlander, there can be only one winner.