END_OF_DOCUMENT_TOKEN_TO_BE_REPLACED

Nearly half of Americans now believe another Great Depression is on the cards...

MOST OF the folks on Wall Street insist they see plentiful signs of economic recovery, writes Eric Fry for the Daily Reckoning.

But then, a lot of folks insist they see aliens out their windows…or the Virgin Mary in their grilled cheese sandwiches.

Maybe the folks on Wall Street are right. Maybe a recovery is unfolding right below our noses. But to us, the "green shoots" of recovery look suspiciously like the AstroTurf of desperate governmental stimulus efforts.

From a distance, the stuff looks like the real deal…or even better. But up close, you find a fake – a parody of economic vitality that will never grow into anything real or self-sustaining. Even worse, the AstroTurf also smothers the soil that could potentially yield productive enterprises.

As a result, the so-called recovery is producing a wide range of severely recessionary phenomena. For starters, according to a recent CNN poll, a whopping 48% of Americans surveyed believe that a 1930s-style depression is "very likely" or "somewhat likely." That's the highest reading since the beginning of the 2008 credit crisis.

We don't know precisely, but we can surmise imprecisely. A lot of stuff is broken. Jobs are hard to come by, debts are difficult to repay and household wealth is extremely difficult to regain.

Meanwhile, the US government's mushrooming debt burden is scaring the bejeepers out of any American with a 5th grade aptitude for arithmetic. According to the latest figures, every American has become a kind of fiscal pack mule – saddled down with nearly half a million Dollars of present and future government liabilities.

Those distant liabilities wouldn't seem so troubling if they did not feel so immediate. But virtually all of America's wealth-creation trends are moving in the wrong direction: taxes are rising, per capita incomes are slipping, inflation is rising and homeowners' equity is collapsing. 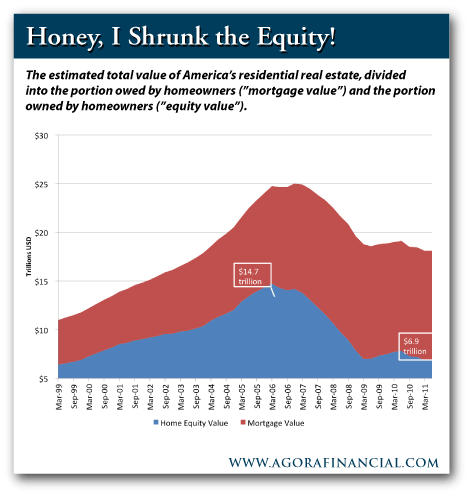 Not surprisingly, a very close correlation exists between the amount of equity Americans have in their homes and the attitudes of Americans toward the economy. You could say these two data series move tick for tick. 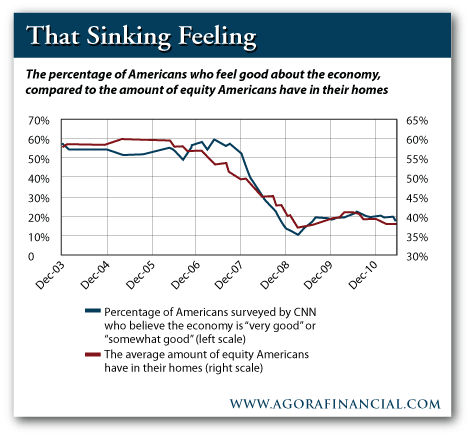 But real estate wealth is not the only disappearing act of the last decade. American households have also lost about $2 trillion of stock market wealth during the last five years.

These aren't pretty numbers. Very few households are better off today than they were five years ago…or even ten years ago. Many are worse off. This bad news might not feel so bad if the US economy were producing a steady stream of good news. But it isn't.

To the contrary, the federal government continues to spend the money that no one seems to have, while Ben Bernanke prints the Dollars that fewer and fewer people seem to want.

When and how this perverse merry-go-round will end no one knows, but it might be a good idea to jump off your pony as soon as possible and find a safer carnival ride…like precious metals or foreign real estate, indeed, any other asset that isn't a Dollar bill or a promise to re-pay a Dollar bill at some future date.

"Everybody's kicking the can down the road of too much public and private debt. The can is becoming heavier and heavier, and bigger on debt, and all these problems may come to a head by 2013 at the latest… We're still running over a trillion-Dollar budget deficit [in the US] this year, next year and most likely in 2013. The risk is at some point, the bond market vigilantes are going to wake up in the US, like they did in Europe, pushing interest rates higher and crowding out the recovery."