END_OF_DOCUMENT_TOKEN_TO_BE_REPLACED

Will the needs of growth further weaken the currency...?

LIKE MANY people, I used to laugh at the export prospects of the United States, writes Gregor Macdonald.

No more. A weaker Dollar, a shift in policy, and a world hungry for natural resources has boosted US exports to 14% of GDP in 2011: 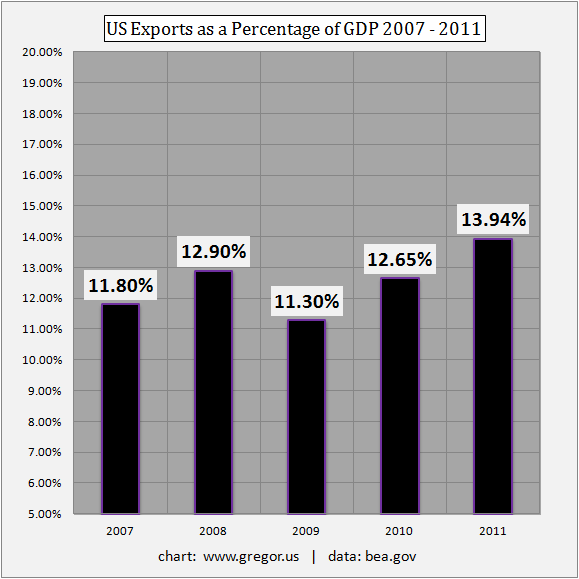 It also helps that the US now has some of the cheapest electricity rates in the developed world, and even cheaper natural gas. Two common components, in manufacturing. Annie Lowrey at the New York Times echoes my recent writings on the subject, and also acknowledges the US has a new industrial policy: exports, and, a resurrection of manufacturing.

But many in the senior economics establishment remain skeptical. Christina Romer for example recently penned an Op-Ed that forced me to ask a question: is the Romer position on the (un)importance of manufacturing a "modern" view that's suddenly become outdated? Discussion of the synchronous, and interactive, relationship between design and manufacturing has been flourishing for several years now. See this Alexis Madrigal piece from 2010: Key Question: Can the US Innovate Without Manufacturing?

The bottom line: in new industries such as greentech, power grid development, and other technology, crucial innovation now emanates from the shop floor. That suggests any new policy to bring design and manufacturing groups back together, in closer physical proximity, is hardly a mistake.

My forecast has been as follows: at present rates, the US will see exports as a percentage of GDP climb well above 15%. At such levels, a new set of preferences will emerge. As an economy increasingly composed of exports, the US will then seek to protect that position even more. The implications for the US Dollar, on a long timeline, become rather obvious.