END_OF_DOCUMENT_TOKEN_TO_BE_REPLACED

MANY Californians right now are no doubt feeling the whipsaws of conflicting government policies, says Frank Holmes at US Global Investors.

Not a month ago, they learned that the state will ban the sale of gas-powered vehicles by 2035, mandating that all new passenger cars and trucks sold in the state must be electric vehicles (EVs).

Then, in a dizzying about-face, residents were asked not to charge their EVs to conserve energy as California's electrical grid was pushed to the limit due to a punishing heatwave.

A recent Newsweek headline perfectly summarizes the apparent absurdity of it all:

Today, about 1% of our vehicles are electric. What will happen in 2035 when many more EVs need to be charged, potentially during another heatwave?

If climate change activists are correct and the temperature continues to tick up, wouldn't the extra burden of having to charge millions of EVs cripple an already-strained electric system?

Before continuing, I should point out how massive California's decision is to move to 100% EVs 13 years from now. California is the most populous and wealthiest state in the US If it were its own country, it would be about the size of Poland in terms of population, with an economy the size of Germany's.

(California also continues to have the nation's worst air quality, ostensibly a major reason for the aggressive action against emissions. In its 2022 State of the Air report, the American Lung Association (ALA) listed six California counties – San Bernardino, Riverside, Los Angeles, Kern, Tulare and Fresno – as having worse ozone pollution than any other US counties.)

The sheer heft of the Golden State's auto market means that carmakers will need to ramp up their gas-to-electric transition plans, especially if more states and countries follow California's lead and implement their own combustion engine bans, which I believe is all but guaranteed. 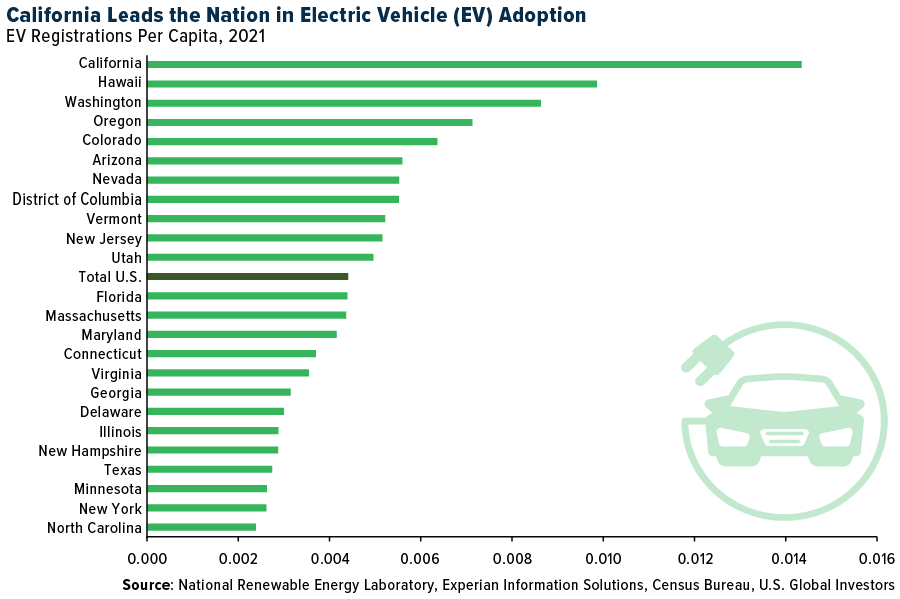 Even before the regulation saw the light of day, California drivers led the nation in embracing EVs on a per-capita basis, as you can see in the chart above. EV sales within the state surpassed 1 million in February, and by the summer, they accounted for more than 16% of all new vehicle sales.

This puts EVs safely within the "early majority" phase of the widely-accepted technology adoption curve, also known as the diffusion of innovation (DOI) theory, developed by sociologist Everett Rogers in 1962. The early majority phase is past the so-called "chasm," Rogers's word for the critical tipping point that separates early adopters and everyone else.

One of the main challenges going forward, as I've discussed before, will be to get the state's charging infrastructure ready to support a fully electric fleet of cars and trucks. California has around 80,000 charging ports, more than any other state, but that obviously won't cut it in 2035, when millions of EVs are expected to be driving on California roads and highways. At the moment, the state has among the worst EV-to-charger port ratios in the nation, with more than 27 plug-in vehicles per charging port. That's well above the median US ratio of 14 EVs per port.

I see this as a huge opportunity for electric vehicle charging infrastructure companies.

That brings me back to the state's (and country's) energy grid. Will it be able to support millions more electric vehicles? Will drivers be told not to charge their cars on days of extreme temperatures? By one estimate, California would need to be generating 50% more electricity than it is today if all cars were plug-ins.

One solution is to make sure that new EVs are equipped with bidirectional chargers. Vehicle-to-grid (V2G) technology allows for energy to be sent from the vehicle back into the grid or building as needed. Not only does this technology provide power to the grid during more expensive high-demand periods, but it could also help reduce the cost of ownership of the EV.

What's more, owners are able to schedule when they need their car to be fully charged. Even if it's plugged in all day, smart charging technology will find the optimal time to charge and, if necessary, deploy energy back into the grid.

Right now, the only vehicle available with bidirectional charging is the Nissan LEAF. Last week, Fermata Energy announced that Nissan approved its bidirectional charger for use in its newest LEAF model, which will not impact the battery's warranty. Fermata Energy says that its proprietary V2G system can "turn EVs into mobile energy storage assets, making it possible for owners to combat climate change, increase energy resilience and reduce energy costs."

With this technology, the hope is that grids will not only be able to support millions more EVs but will actually be strengthened by them.

But then, aren't we just transferring emissions from vehicles to coal- and gas-burning power plants?

Today, the answer to that is mostly yes. By 2035, perhaps less so, due to the growth in renewable energy sources such as wind and solar.

As it does with EVs, California currently leads the US in cumulative solar capacity, with as much as 37,086 megawatts (MW) installed, according to the Solar Energy Industries Association (SEIA). The state's next big solar project, named Project Nexus, will see miles of solar panel "canopies" covering sections of the Turlock Irrigation District's irrigation canals. The project, which will break ground early next year and be completed in 2024, is expected to generate an incredible 13 gigawatts (GW) of power, which is equal to one sixth of the state's current electricity capacity.

But what about the rest of the US? The so-called Inflation Reduction Act (IRA), signed into law last month, is expected to be a "massive growth catalyst for the solar industry," according to a new report by the SEIA and Wood Mackenzie. The two groups project nationwide solar deployment to increase by as much as 40% over the next five years (2023 – 2027), even as the industry will remain supply-constrained through the end of 2023.

In the chart below, the green line indicates the SEIA and Wood Mackenzie's solar capacity installation forecast prior to the passage of the IRA, while the bars represent current forecasts. 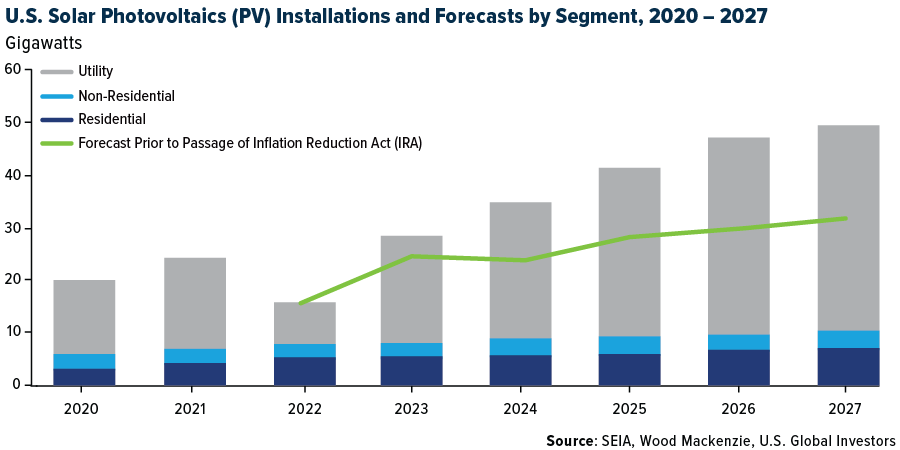 This buildout should benefit not only solar panel manufacturers but also the companies that supply the metals and other materials – silver and copper in particular.