END_OF_DOCUMENT_TOKEN_TO_BE_REPLACED

THE FRENCH now have one more reason to grumble about those annoying Americans, writes Eric Fry for the Daily Reckoning.

"AA+ is also not a bad rating," reassured German Chancellor Angela Merkel. The French were not so eager to agree with Merkel's patronizing assessment...and neither were any of the other nine Eurozone governments that received a rap across the knuckles from S&P.

Although Finland, the Netherlands and Luxembourg still hung onto their AAA ratings, S&P placed these three sovereign issuers on "negative watch." They were the lucky ones. Austria lost its triple-A rating, while Cyprus, Italy, Portugal and Spain were all cut by two notches. The latest downgrades placed Portugal deep into "junk" territory and Italy to near-junk.

S&P dispersed enough "bad juju" to annoy almost every country on the European continent. No surprise that one influential European finance minister said he plans to huddle up with his fellow Eurozone members to create a European rating agency.

But the facts are what the facts are...and the facts are that many pupils in this class are receiving a failing grade. Eliminating "F's" from the grading scale won't improve their command of the subject matter. Many pupils would still be insolvent...and moving toward a default.

A few days ago, for example, Spain disclosed that its budget deficit would be a wee bit larger than expected — 8% of GDP, rather than the expected 6% of GDP. Apologizing on Spain's behalf, European Commission Vice President Olli Rehn said he "regret[s] the sizable fiscal slippage."

This comment bore an eerie resemblance to the comment Greek Finance Minister, Evangelos Venizelos, uttered three months ago to describe his nation's downwardly revised budget deficit forecast. We are "adjusting for slippage," the Greek money man explained. The deficit that was supposed to total a hefty 7.6% of GDP for the 2011-12 fiscal year "slipped" to an even heftier 8.5%.

"Adjusting for slippage" is the latest government fashion...and it is expensive. "Governments of the world's leading economies have more than $7.6 trillion of debt maturing this year," Bloomberg News reports, "with most facing a rise in borrowing costs." 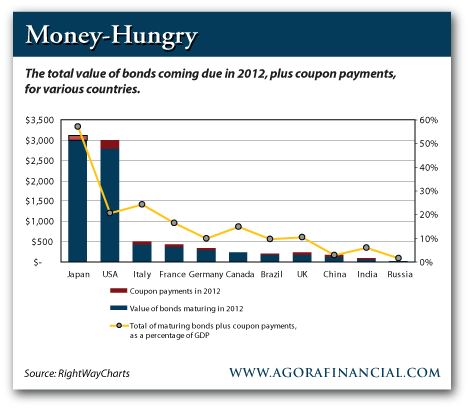 But these numbers tell only part of the grim story. $7.6 trillion is only the amount required to repay maturing bonds, plus accrued interest. This tally does not include the new borrowing needed to plug massive government deficits. After adding new borrowing to the total of maturing bonds, the total financing required in 2012 will be more than $10 trillion.

That's a lot of borrowing. But again, even these numbers don't tell the entire story. Borrowing costs are soaring for the governments that can least afford it. The chart below shows the year-over-year percentage change in 10-year borrowing costs for various governments. The Italian government, for example, must pay 6.62% per year to borrow money for ten years — an interest rate that is nearly 40% higher than the 4.75% rate the Italians paid one year ago to borrow money for ten years. 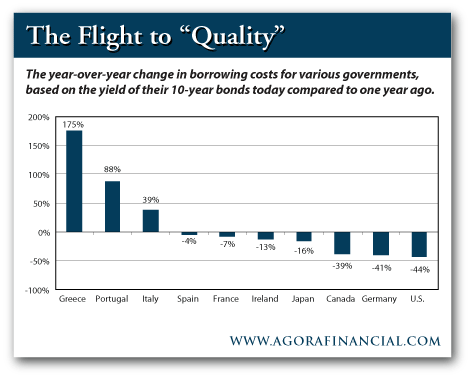 "Sizable fiscal slippage" is not automatically expensive...as the falling interest rates on US Treasury securities attests. But it is very expensive for those countries that have lost the faith of investors.

Europe's sovereign borrowers are finding themselves in one of two camps: the "haves" or the "have-nots." Because Italy and Portugal, for example, "have not" the confidence of bond investors, these two governments also "have not" any buyers of their bonds at low interest rates. As a result, Italian and Portuguese bond yields are soaring, even while the bond yields of Germany, the US and other "flight-to-quality" issuers are falling. Amazingly, German and US 10-year yields are both down more than 40% year-over-year. 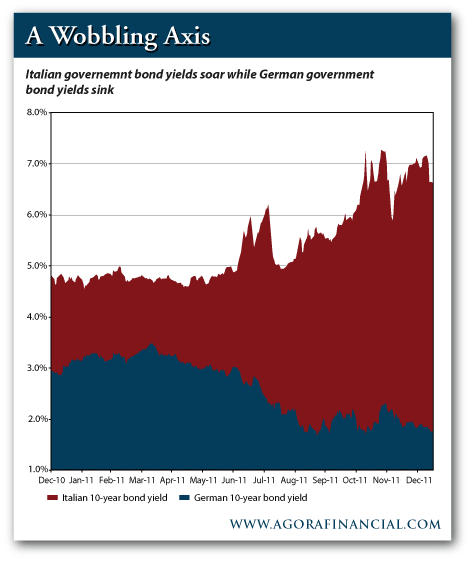 When the news of the S&P downgrades crossed the newswires Friday, most European stocks and bonds traded lower. One conspicuous exception was the German 10-year government bond, which traded higher on the news — pushing the yield all the way down to a record-low 1.76%.

As the last remaining "stable AAA" sovereign borrower in the Eurozone, German government bonds are attracting brisk "flight to safety" demand — a trend that has been under way for many months. But while Germany's interest costs are plummeting, many European countries are struggling with rapidly rising interest costs...and for good reason.

Italian interest rates are rising because Italy is strapped for cash. And so are many other Western nations...including the United States. In fact, the US just made the wrong sort of headlines by announcing that its debt-to-GDP just topped a Greek-like 100%. America's staggering $15 trillion debt load may not be fatal, but it is not the kind of headline you want to print in big block letters "above the fold" of The New York Times.

More than likely, however, Irish writer, Brendan Behan's adaptation of Wilde's quote is closer to the mark when talking about America's debt load or Treasury bonds: "There's no such thing as bad publicity...except your own obituary."