END_OF_DOCUMENT_TOKEN_TO_BE_REPLACED

Fade the media, both mainstream and minor...

"SELL in May and Go Away" is perhaps the catchiest of all market sayings, says Gary Tanashian in his Notes from the Rabbit Hole.

But as Charlie Bilello at Pension Partners points out, it's likely better to fade that adage and buy in May...or any month...and stay invested.
https://pensionpartners.com/buy-in-may-and-stay-invested/

My closely held biases are that a) the market's cycles can be interpreted and managed (although my bias also has led me astray at times, in my execution) and b) that the economy, and by extension the markets, are not normal; not your grandpa's economy and markets because they are ginned and steroidally goosed by off-the-charts (ie, experimental) central bank meddling. That's my bias in line with my entire history of public writing since 2004.

So I am not a stock market apologist, bull wise guy or 'buy 'n hold stocks for the long' run tout. But I am the guy who is frequently nonplussed about the mainstream media fanning the flames of investor/trader sentiment during inflammatory news cycles. As Charlie says "it is their job to entertain" and "your job to ignore".

But this applies not only in the major media. It applies to the minor media as well.

Led by Zero Hedge, a whole raft of blogs and other entities are going to fan your flames with all sorts of opinionated, agenda driven or just plain biased information. And what Charlie has right is that it is absolutely imperative to tune it the hell out.

That is because the bias never changes because it is promoting emotional viewpoints, promoting sides, teams. Whereas in the market, the only side is the right side, whether your little heart of hearts agrees with it or not.

The most recent example as I look around and see the stock market, the rally scenario is still intact as I've been highlighting in NFTRH. Sure, I am telling you that you should consider this right-minded service for your needs during both bullish and bearish phases (handy promo there, eh?) but I am also insisting that you tune out the damn media as any sort of strategic, real-time source of information.

It's all entertainment (and worse) as Charlie says. Here are the graphics that were included in a recent NFTRH update to help make the point that we needed to remain calm. 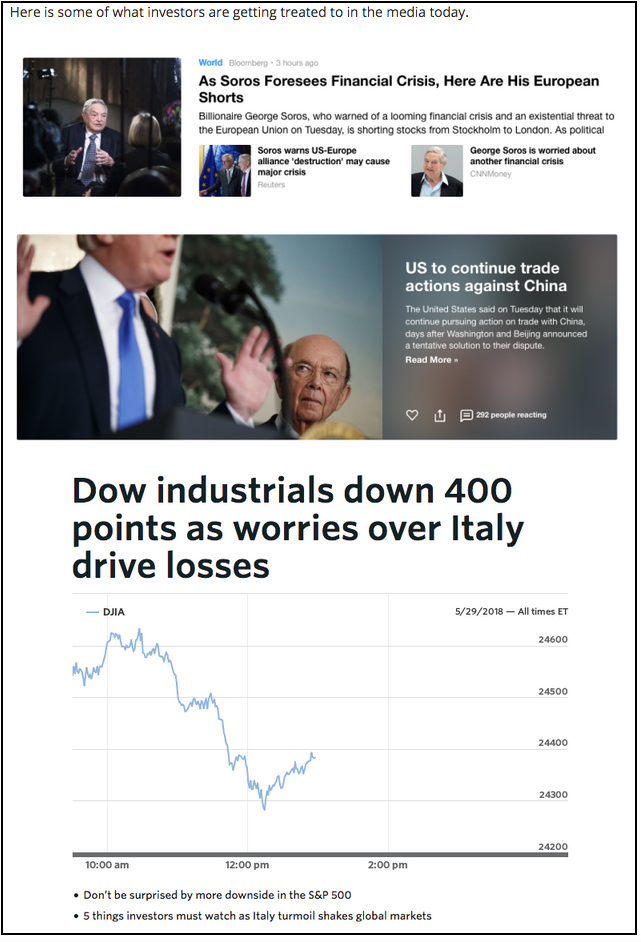 It's not to say that Soros may not eventually be right, or that US/China trade will not become a major issue, or that Italy will not kill the world with contagion.

But it is to say with 100% fact and accuracy that on the day investors were treated to these headlines, one week later they'd be better off not having paid attention – or at least taken it as yet more entertainment served up by the media.