END_OF_DOCUMENT_TOKEN_TO_BE_REPLACED

We can't trust the story our leaders are telling us...

American house prices rose 5.5% from last year, Chinese GDP rebounded, and here in Australia our very own mining boom is yet to 'peak' according to Access Economics. The result of all the good news was the Australian stock market's longest winning streak in almost 10 years, with 10 up days in a row.

But last night we found out American GDP slumped 0.1% in the fourth quarter of last year. Markets overseas took a hit and our winning streak may be over.

How you perceive the sudden drop in the world's most important economy depends on your politics. Some say the drop is entirely due to cuts in the defense budget, which the Republicans forced on Obama. Republicans and defense budget cuts? Hmmm.

The rest of the blogosphere is pointing out that the third quarter's surprise GDP growth jump to 2% was due to government spending...just before the election. In other words, government spending was 'brought forward' to make the economy look good going into the polls.

But you can only shuffle around so much GDP growth if you're the President. Now the bill is due in the form of less GDP in the fourth quarter. The figures match the story, but we'll never know if it's true.

There's no reason to be pessimistic as an investor though. If anything goes wrong, central banks will just print more money until the stock market goes up. In fact, they're already doing just that, according to Bloomberg:

'The Federal Reserve will keep purchasing securities at the rate of $85 billion a month after the economy paused because of temporary forces including bad weather.'

Yes, money printing now fixes bad weather. Maybe we can somehow link it to global warming. Or blame the Federal Reserve's Chairman Ben Bernanke for causing a bubble in one of our favorite surfing spots: 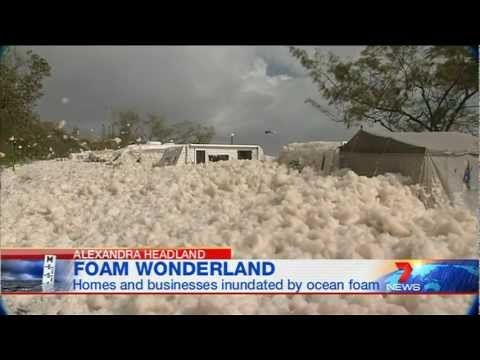 What more could investors want than a world run by central bankers? It's a punter's paradise.

The thing is, all this wonderful froth can't last. Printing money just isn't a good idea.

First of all, a reality check. American house prices didn't rise, the increase was due to a 'seasonal adjustment' to the data. In fact, they declined for the second month.

China's GDP is based on a credit bubble, with hundreds of billions of Dollars in soured loans being papered over just to keep up appearances. And if the resource boom is going to peak this year, what does that mean for all the jobs tied up in growing mining infrastructure for future expansion?

The world's recent economic news is false. Things are not improving. They're getting steadily worse. And there's a reason for this. An induced coma might stop you feeling pain, but it tends to be bad for your productivity.

That's not something politicians and central bankers can understand. To them, it's all about making things look good. They care about data, not results.

You might think we've had about five years of constant intervention by governments to keep the global economy barely on its feet. But you'd be wrong. We've had decades of it. And that's important because it puts the global financial crisis into perspective.

Governments lost control of their crazy economic experiment for a few months. The bubble they created by manipulating monetary policy and by spending like drunkards suddenly collapsed around them.

If a disaster was possible in 2008, the same thing can happen again. Debt, deficits, unfunded liabilities, inflation, joblessness, and so much more is relying on more and more money printing and more and more spending to stay hidden. But it's all building up. At some point, they'll lose control again.

Just what will be our 'Lehman Brothers moment' this time around is a tough guess. There's a whole buffet of possibilities to choose from. But real financial crises are triggered by something unexpected.

The problem is, they can take their time. American politician Ron Paul predicted the collapse of the housing market in 2002. Talk about being early!

It's difficult to know whether we should look forward to an outbreak of reality in the world. What would things look like without the lies of money printers and governments? Sure, they'd look worse. But at least we'd wake up from our coma.