END_OF_DOCUMENT_TOKEN_TO_BE_REPLACED

Faced with slow inflation and bleak growth, the ECB eased again, delivering a fresh stimulus package. What does it mean for the gold market?

Amid the continued shortfall of inflation, the ECB cut its deposit rate by 10 basis points from -0.40 to -0.50. Yes, you read it correctly, from negative 0.40 to negative 0.50. The subzero madness has deepened in the Eurozone. What is more, the central bank announced that the ultralow interest rates would remain until inflation reaches the target:

"The interest rate on the deposit facility will be decreased by 10 basis points to -0.50% (...) The Governing Council now expects the key ECB interest rates to remain at their present or lower levels until it has seen the inflation outlook robustly converge to a level sufficiently close to, but below, 2% within its projection horizon, and such convergence has been consistently reflected in underlying inflation dynamics."

Luckily for the European banks, the ECB introduced finally a two-tier system, which means that only a part of banks' holdings of excess liquidity held at the central banks will be subject to negative rates.

But it's not the end of the fireworks Draghi prepared for his leave. The ECB will restart its quantitative easing in November. The bank will be purchasing €20 billion of assets monthly:

"Net purchases will be restarted under the Governing Council's asset purchase programme (APP) at a monthly pace of €20 billion as from 1 November. The Governing Council expects them to run for as long as necessary to reinforce the accommodative impact of its policy rates, and to end shortly before it starts raising the key ECB interest rates."

Please note that the program is open-ended, tying Lagarde's hands. Draghi not only promised to do 'whatever it takes', but also 'as long as it takes'.

What do all the ECB's actions mean for the gold market? The fresh package is quite powerful. Draghi cut further the interest rates further below zero, and they will not be hiked until inflation not only converges but also stabilized at the target. The ECB also restarted its quantitative easing, making it open-ended. It means that the bank will keep on buying assets for months or even years.

The bold ECB's decision should weaken the Euro against the Dollar, which would be negative for the gold prices in US terms. However, after a sharp drop, the EUR/USD exchange rate quickly rebounded, as the chart below shows. 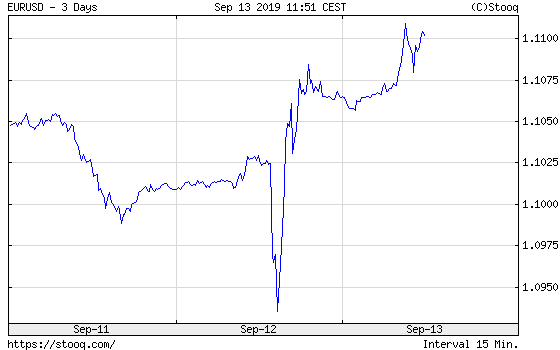 But it indicates that the immediate impact of the ECB's monetary policy meeting has been moderate. However, Draghi managed to spur furious reaction from Donald Trump. The US President tweeted:

"European Central Bank, acting quickly, Cuts Rates 10 Basis Points. They are trying, and succeeding, in depreciating the Euro against the VERY strong Dollar, hurting US exports....And the Fed sits, and sits, and sits. They get paid to borrow money, while we are paying interest!"

So it might be the case that Draghi not only tied Lagarde's hands but also Powell's hands.

Under pressure from both the dovish ECB and angry White House, the Fed would be more likely to deliver another interest rate cut, which should be supportive for the gold prices. Indeed, with the exception of the QE-infinity, the ECB's actions, although very dovish, were not as dovish as many people expected, so we could see some Dollar depreciation against the Euro – and gold.