END_OF_DOCUMENT_TOKEN_TO_BE_REPLACED

Loose lips sink bond prices in and outside the Euro...

On 31 JANUARY 2017, the Trump administration fired the first shot in a "Currency War' with the Eurozone, writes Gary Dorsch at Global Money Trends.

Trump's top trade adviser Peter Navarro accused the German finance ministry of using a "grossly undervalued" Euro to "exploit the US and its EU partners", in written comments in the Financial Times.

Navarro, the head of Mr.Trump's new National Trade Council, told the Financial Times the Euro is like an "implicit Deutsche Mark" whose low valuation gave Germany an advantage over its main partners. While not necessarily novel – Germany has often been accused of being the biggest winner from a weak Euro at the expense of peripheral Europe – and his views suggest the new administration is focusing on the Euro exchange rate as part of its hard-charging approach on trade ties.

The Euro is far weaker than the Deutsche Mark would have been – which many economists estimate would otherwise be trading around $1.500, if still in circulation. Instead, German exporters are benefiting from the advantages of Euro's exchange rate – trading between $1.05 and $1.16 for much of the past two years. 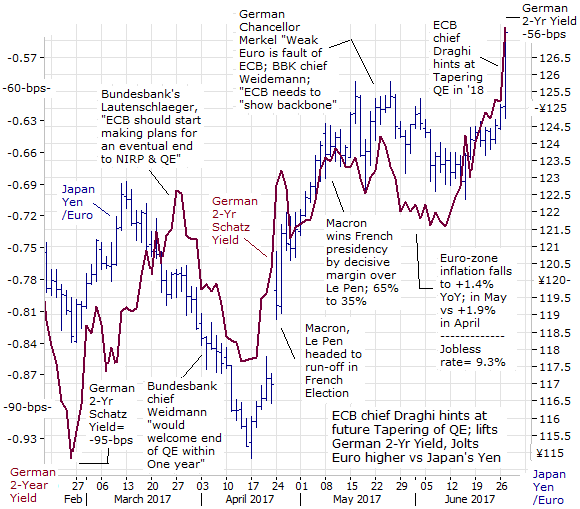 This means that Germany's decision to abandon its old currency in favor of the Euro has acted as a disguised devaluation. Indeed, the German trade surplus rose to a record €235 billion ($284 billion) last year, including a $64 billion trade surplus with the US in 2016. As such, Germany has positioned itself as the third largest exporter in the world, after China and the US.

Mr.Navarro's comments highlight a growing willingness by the Trump administration to antagonize EU leaders and particularly Angela Merkel, the German chancellor. Besides publicly supporting the UK PM's Theresa May's government in its negotiations with the EU over the terms of its exit, Mr.Trump called the EU a vehicle for Germany, and Nato an obsolete alliance.

On May 26th, Mr.Trump stunned his fellow NATO leaders, demanding that they "must do more" to offset defense costs which are mostly borne by the US. Trump lobbed another bomb by renewing his attacks on the German auto industry during a closed door meeting with two high-ranking European Union officials, according to a report in German magazine Der Spiegel, that was picked up by Bloomberg and CNBC. Citing unidentified attendees, Spiegel quoted Trump as saying that "the Germans are bad, very bad" and adding "look at the millions of cars that they sell in the US Terrible. We're going to stop that."

German Chancellor Angela Merkel rejected the accusation from US President Donald Trump's top trade adviser that Germany is bolstering its exports with a "grossly undervalued" Euro in a growing trans-Atlantic spat. "It's not my fault." Noting that she "can't change the situation with respect monetary policy," (so blame Draghi), Merkel added she "doesn't want to influence the Euro exchange rate. Germany has always supported an independent ECB, which is why we won't seek to exert influence over the ECB. "I neither want to nor can I do something to change the situation," Merkel added.

However, on February 6th, 2017; German Finance chief Wolfgang Schäuble added his opinion to the debate over the appropriate value for the Euro's exchange rate, and blamed the ECB for keeping it too low in comments to German magazine Tagesspiegel. "The Euro exchange rate is, strictly speaking, too low for the German economy's competitive position. When ECB chief Mario Draghi embarked on the expansive monetary policy, I warned him he would drive up Germany's export surplus." Schäuble added, The ECB should start unwinding QE & NIRP this year. It would presumably be right if the ECB dared to exit this year".

On March 27th, Bundesbank member Sabine Lautenschlaeger, echoed these remarks, saying the ECB should start making plans for an eventual end to its extraordinary stimulus, arguing for the need to step off the monetary accelerator.

On April 5 the chief of the Bundesbank, Jens Weidmann, told the German weekly Die Zeit; he would be happy to see the ECB dismantle the QE bond buying program within a year.

"The time to keep the foot no longer on the metal, but to take it off slightly is approaching in my view. The Eurozone economy is robust enough for the ECB to consider ending its current easy money policies. Could it soon be time to take our foot off the gas? In my opinion, it's getting closer."

Weidmann has repeatedly voted against QE, under which the ECB buys €60 billion per month of government and corporate debt.

The purchases are designed to pump cash through the financial system and into the real economy, but in reality, QE ends up simply inflating the value bond and stock markets. "I see bond purchases as a pure emergency tool, for times when there is a threat of deflation," Weidmann said. "I already thought deflation was unlikely in the past. Based on everything we know at the moment, the economic upturn in the Eurozone is robust and will continue. Inflation will increase at the same time," Weidmann added.

Until now ECB chief Mario Draghi has refused to bow to German pressure to exit from its QE and Negative Interest Rate Policy – saying its for the entire Eurozone, not just Germany.

However, a key turning point was reached on May 22, when Mrs Merkel admitted Germany's trade exports have reaped huge benefits from the weak Euro, and said the ECB's ultra low interest rates and mammoth money-printing scheme were the cause. The comments caused a jump in the Euro's exchange rate, amid expectations monetary policymakers could feel pressure to taper QE. It was the first time Merkel had publicly criticized ECB policies.

It followed on the heels of the victory of centrist, pro-Europe candidate Emmanuel Macron in France's presidential election which has reduced political uncertainty for the Euro currency.

On June 27th, the Euro has lept above $1.13 and above ¥127 after ECB chief Draghi signaled growing confidence in the Eurozone's economic recovery and rising inflation. "The threat of deflation is gone and reflationary forces are at play," Draghi said in a speech in Sintra, Portugal. His comments fueled speculation that ECB policymakers could soon begin discussing a withdrawal of monetary stimulus.

Draghi also indicated that he was not overly concerned about the recent weakness in inflation. "Now we can be confident that our policy is working and that those risks have abated," the ECB president said.

"Our policy needs to be persistent and we need to be prudent in how we adjust its parameters to improving economic conditions." The shift in rhetorical tone is seen as a key step towards tapering QE next year. "Any such move would be gradual and cautious," Draghi said. While the bond purchases are slated to run at least through year end, many analysts think the bank might give a clear signal at its September 7 meeting. Absent unexpected trouble for the economy, the ECB's bond purchases could be reduced to €40 billion /month in the first half of 2018, and to €20 billion in the second half before ceasing at year end.

In reaction to Draghi's comments, that were interpreted as laying the groundwork for the tapering of QE; Germany's short-dated bond yields jumped to their highest in a year, and the Euro's exchange rate spiked higher. The yield on Germany's two-year Schatz bond rose to minus -0.56%, its highest in a year. The yield on the German 10-year Bund jumped +11-basis points to a one-month high of 0.36%. The US's and UK's 10-year sovereign yields moved in tandem – up 6-bps to 2.19% and the Gilts 7-bps higher to 1.09%.