END_OF_DOCUMENT_TOKEN_TO_BE_REPLACED

One last flourish for ECB's Draghi...?

Will gold warm up to her more than to Draghi? It remains to be seen, but one thing is certain: Super Mario will not leave his position just like that. Gold investors should be prepared for his Grand Finale.

In June, the ECB became more dovish, as it postponed the possible beginning of its interest rate hiking from the end of 2019 to the mid-2020. Shortly after the central banks' monetary policy meeting, at the annual conference in Sintra, Portugal, Draghi delivered a mini 'whatever it takes' speech, sending even more forceful signal about the upcoming monetary accommodation. Last month, we wrote in the Gold News Monitor that "the European central bankers are getting more worried about the state of the Eurozone economy and may adopt an even more dovish stance in the near future".

The future is here. Today the ECB Governing Council is meeting again. The markets expect that Draghi will set a stage for his final act as the ECB President. Given the lack of economic improvement since June, the central bank is likely to tweak forward guidance, signaling or even announcing openly further interest rate cuts and/or restart of the quantitative easing.

Yes, the deposit rate is already set at minus 0.40 percent, but introducing tiering system, which softens the hit for the banks' profitability, would allow for even deeper negative interest rates. Good news for gold priced in Euros.

The fresh ECB's stimulus package could help Christine Lagarde to start her position as the new ECB President, as she would not have to explain herself, but she could "blame" her predecessor. Lagarde was appointed earlier this month to run the ECB starting November 2019. Her name should sound familiar for you, as she has been for years the managing director of the International Monetary Fund.

Is she an appropriate person to preside the ECB? Some critics question it, given her background in law rather than economics. Of course, Powell is also a lawyer, not an economist, but he has served before as the governor at the Fed's Board, while Lagarde has no experience in central banking. But, hey, can the monetary policy become much worse?

What really matters is whether she will be more or less dovish than Draghi. One could expect that it's impossible to beat the Super Mario on dovishness, but this is actually how the markets see Lagarde. Her appointment was met with a ratcheting up of rate-cut expectations and lower bond yields. Hence, she will not only continue the ECB's dovish policy stance, but she could even be more proactive and double-down on the monetary easing.

What does it all mean for the gold market? The impact of the fresh ECB's accommodative measures is not clear. On the one hand, the ECB's dovish move will work to weaken the Euro against the US Dollar. Stronger greenback is nothing but a headwind for the gold prices.

On the other hand, the May appreciation of the Dollar did not trigger a plunge in the gold prices, as the chart below shows. So even if the greenback strengthens again, it may not hit gold too hard. 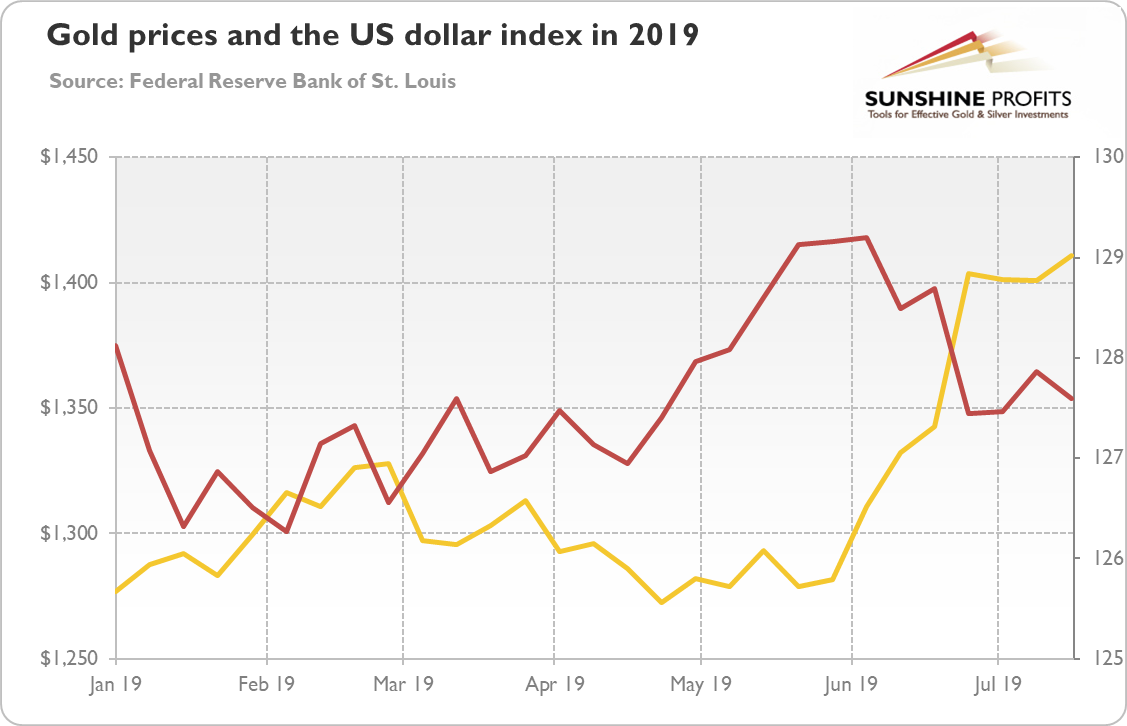 Moreover, the fresh ECB's easing package could add to the recessionary fears, which would be supportive for safe haven assets such as gold.

Even lower interest rates – German bond yields have already dropped in anticipation of Mario's grande finale – would further reduce the opportunity costs of holding gold, a non-yielding asset, making it more attractive. Reducing interest rates deeper into negative territory could also rattle investors, who see the NIRP as an act of desperation. As a reminder, when the Bank of Japan slashed interest rates below zero, the price of gold in Japanese Yen rallied.

When it comes to Christine Lagarde, financial markets welcomed her nomination as the next ECB President. After all, she has always been supportive of the ECB's unconventional policies. And she is not Jens Weidmann, a hawk from the Bundesbank who was considered as Draghi's possible successor. Her appointment means that the monetary policy in the Eurozone will remain easy.

When seen in isolation, it could be negative for both the Euro and gold. But now that the ECB is going to ease its monetary policy hand in hand with Fed, which means that a stronger tailwind for gold.