END_OF_DOCUMENT_TOKEN_TO_BE_REPLACED

China is going down the stimulus route. Again...

MAINSTREAM thinking has it that Chinese economic growth will moderate and commodity prices will return to trend, writes Dan Denning for the Daily Reckoning Australia.

But, so that thinking goes, other than the natural maturation of Chinese growth, everything will be fine for the next thirty years.

It would be nice if the above scenario was true. But kicking back your heels and accepting that position is remarkable lazy. On top of that, it shows a distinct lack of imagination and a deficit of curiosity. You won't get anywhere in life taking things at face value as you hoover down calories from processed foods. So let's push on.

We'll begin with our moody companion Dr Copper again. But this time, we've put him in the same room with the Shanghai Composite for the last seven years to see how they've been getting along. Thick as thieves lately, you could say, although it hasn't always been that way.

Spot Copper and the Shanghai Composite 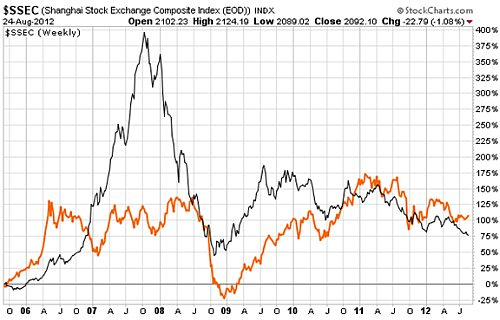 The start date for the price performance of both is arbitrary. Pick a different date and you get different performance. Our aim here was to see if they are travelling together or separately.

You can see that the Shanghai composite has been in slow-motion decline since mid-2009. The highs are lower and the lows are lower too. Another few quarters of soft industrial production and the index will be back to its 2009 lows.

In fact, those lows could be sooner than you think. Profits at Chinese industrial companies fell for the fourth month in a row, according to Bloomberg. Accordingly, shares in Chinese commodity suppliers fell. Jiangxi Copper was down by 1.5%.

The thought of a harder landing for China's economy is clearly enough to terrify at least some members of the US Federal Reserve. It's bad enough that Europe, the US and Japan are mired in their own debt depressions. But if China crashes to earth, you can kiss the US Dollar system goodbye.

'I don't need to see any more data to know that I think we should have more accommodation,' said Chicago Fed President Charles Evans from the US Embassy in Beijing. 'I certainly would applaud anybody who takes action in order to strengthen their economies,' he added.

Evans is not alone in wishing to roll out the barrel for new stimulus measures. This is baffling, seeing as how none of the previous ones have done anything to solve the debt problem. Of course, they were not designed to extinguish debt. All previous liquidity and refinancing measures were designed to perpetuate the idea that assets in the banking system are held and priced correctly.

In the event, the Chinese were already on the case. Major cities like Chongqing and Tianjin have rolled out spending programs that amount to at least $500 billion in investment in a variety of sectors and industries. As far as we could tell, however, there was no mention of where the money would come from.

In the past, local governments and cities have been able to use land as collateral for loans organized by cooperative State-owned banks. Will that work this time around? Or are concerns about the Chinese banking system already causing capital to flee the country and credit to get tighter?