END_OF_DOCUMENT_TOKEN_TO_BE_REPLACED

FANG back in fashion as Trump bump fades...

The Donald Effect has ignited a monstrous rotation in the markets. Big banks and forgotten industrial names rip higher. Meanwhile, former leaders in the tech space take a seat.

The Nasdaq has dropped to its lowest close since November 14. These former high-fliers have been nothing but a drag on the Nasdaq and the S&P 500 since the election. Meanwhile, the Dow continues to climb. It's up nearly 5% since November 8, compared to a gain of a little more than 1% for the Nasdaq Composite.

All the flashy, popular stocks are falling off a cliff. Even the famous FANG foursome – Facebook, Amazon, Netflix, Google – are stuck in the doghouse. These stocks are each down at least 4.5% since Trump shocked the world.

The Dow just missed hitting 20,000 on Friday. But the Nasdaq Composite rocketed to a new all-time high. Big tech names like Google and Netflix are ripping higher. After enduring a couple of months on the scrap heap, traders are flocking in droves to these reliable performers.

The new year is quickly resurrecting several dying trends. With one week of 2017 under our belts, we're seeing "Trump bump" plays like energy and financials sink into the red while technology and healthcare sprint higher.

Speaking of the healthcare sector, you probably weren't thrilled by its lackluster performance in 2016. Even after bouncing off its winter lows, the group underperformed every other major sector on the market last year...

"Its loss was modest, but the healthcare sector was the only sector to finish 2016 in the red, meaning the Health Care Select Sector SPDR (NYSE:XLV) notched its first annual loss since 2008," ETF Trends said at the start of 2017 trading.

"That means plenty of eyes will be on XLV and rival healthcare exchange traded funds in 2017."

Apparently, all those eyes are scooping up shares.

The healthcare sector has exploded out of the gate in 2017. It was the strongest sector on the market during the first trading week of the year. And it's flashing signs that a comeback move might just be getting started... 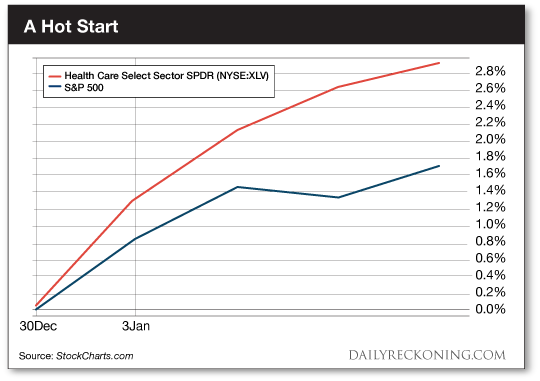 The Health Care Select Sector SPDR finished higher every day last week, launching the sector back above its 200-day moving average. The broad market posted a strong start to the year with the S&P 500 gaining 17%. But Healthcare stocks were the bigger winner. The group jumped almost 3% to finish the short trading week near 2-month highs.

It's a little too early to say if this action marks the end of the road for groups like basic materials and financials that have thrived since the election. But quick rotations like these have been one of the key characteristics of this market as it has snapped out of its funk.