END_OF_DOCUMENT_TOKEN_TO_BE_REPLACED

Dollar strength? Against this macro-economic and political backdrop...?

FOR FULL-TIME GOLDBUGS these last 18-24 months have been a constant changing of masks, writes Randolph Buss of DINL.net, often laughing yet also often bawling as Gold retreats.

This week all the precious metals took a hit, along with Gold Mining Stocks. Even the coal index was down 4%. Yet it seems counter-intuitive that gold should be correcting this much in the last few weeks against the broader backdrop:

But that's exactly what gold is doing – Plunge Protection Team or not!

Stepping back, however, we see in fact that the overall trend remains clearly upward and within the solid green channel. 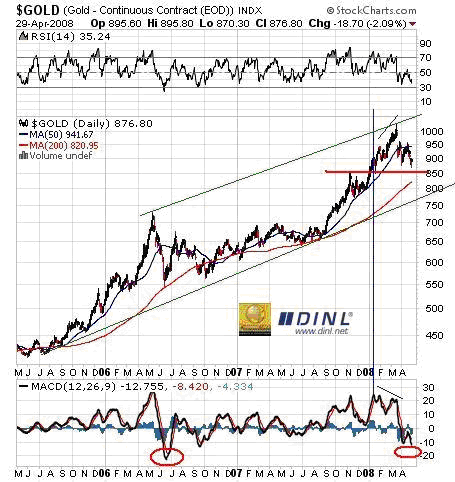 The uptrend on the chart shows a possible retracement back down, but along the way resistance levels lie at 850, 820 and 790.

In the overall scheme of things, this certainly looks like a "normal correction" to accompany the cries of a commodity-hype. And short-term, the Moving Average Divergence (MACD) again stands at what technical analysts call an "oversold" level – the same as existed after the May 2006 correction.

Are we ready to embark on a new leg up ?

I still am ardently positive on the Euro versus the US Dollar, as the European Central Bank has stated they intend (at this point in time) to curb inflationary tendencies in the Eurozone.

This should put a bottom under the Euro in the currency markets. Likewise, I suspect the Fed will try to offset any depressionary economic scenarios by easing credit.

So yes, although inflation is the "color of the day" in the media, the real culprit is a depressionary tendency in the West, and especially the United States; hence monetary strategists at central banks tend to counteract this by increasing liquidity and easing credit.

Remember, any easing of Fed rates takes time to filter through the system and we may see a strong autumn rally in the metals. At this point in time I cannot foresee that the Fed will suddenly stop easing for the foreseeable future, especially when US housing continues to fall, employment is weak, budget and fiscal debt remains large and the "never-ending" wars continue.

US Dollar strength? Anything is possible, but my immediate thought is "Dear, surely you jest!"

A graduate in engineering who began his career in software programming, Randolph Buss now works in portfolio & asset management, studying the commodity markets in especial.