END_OF_DOCUMENT_TOKEN_TO_BE_REPLACED

Everyone knows the Dollar is toast; yet the move into gold has barely begun...

PERUSING THE FINANCIAL PAGES over the past week, I was increasingly puzzled about why the denizens of Wall Street and Main Street appear to be paying almost no attention to the unfolding crisis.

Take the news that, according to the popular financial media, investors have been cheered by the rumor that Warren Buffett may buy into the sinking Bear Stearns investment bank.

Sure, he might! But if he does, rest assured it will be at a fire sale price... the beginning of a trend, if you ask us, of salvage operators moving in to lay claim to abandoned and sinking ships.

And even if Buffett did buy into Bear Stearns, it would be worth contemplating the inevitable fate of all gurus, sages and oracles. A recent example was provided by legendary Bill Gross of Pimco, the world's largest bond-fund manager. He, like Buffett, could make no misstep...until 2005 when he stepped off a cliff, costing him his sterling reputation and his loyal followers their money.

Glancing at the three-year return of his much glorified mutual fund, we find you would have done better in a money market fund.

Over the past week, we also learned that things remain less than chipper in the US housing sector, summarized nicely in the following Bloomberg headline:

"US New-Home Sales Slump More Than Forecast; Prices Drop Most Since 1970."

We also heard that Citigroup's profits slid 60%...that the EU political class is talking down the Euro, the starting gun in a race to the bottom for the fiat currencies (of course, with the Dollar falling, exporters from other countries are disadvantaged)...and that Toronto-Dominion bank is using its appreciated Canadian currency to swoop in to pick off US banking giant Commerce Bancorp (expect more of this sort of thing, too).

Personally, however, the most puzzling of my weekly readings have involved the many articles and analyses noting that investors are pleased, made giddy even, by the prospect that the Fed will make even further cuts to US interest rates.

So cheered are investors, in fact, that since the Fed's last cut, major US stock markets have soared to new records. This when they should be crashing!

I can't help wondering how those people still feeding money into the broader stock markets have missed the entire disgruntled foreign Dollar holder issue? You know, what happens when foreign holders of an unprecedented $6 trillion get serious about unloading some of those dollars now that the Fed has shown it will sacrifice the Dollar in order to try to keep the US economy afloat.

To be something less than politic, I find myself wondering how anyone who thinks that destroying the Dollar is a free pass to a bright tomorrow, and then back up that view with their investment dollars, could be so stupid?

My sincere belief – formed by my interactions with the breed while a partner in a mutual fund group some years back – is that the disconnect with what seems to be so obvious to us, but not to the "Street", has to do with the herd mentality of mainstream financial analysts. And, by extension, the mentality of people who actually tune into mass media for their investment advice (which, to my way of thinking, is like going to McDonald's in the expectation of enjoying fine dining).

It is this herd mentality that makes them slow on the uptake.

The worst possible calamity that can befall a money manager is to be found underperforming the peer group averages when quarterly portfolio review time rolls around. Don't get me wrong; it is of no concern if you lost your client's money in great gobs over the previous 3 months...as long as everyone else has also lost their clients' money in more or less the same proportions.

But underperforming your peer group for two or three quarters in a row, that is another thing altogether. In that sad event, you could find yourself called to the captain's quarters for a good old-fashioned thrashing and possibly, heavens forbid, a reduction in income so severe you might have to give up the 8,000-square-foot cottage in the Hamptons (a fate, I am told, worse than death).

Given the dire consequences of underperformance, therefore, the Armani-loafered herd walks largely in lock-step – and very gingerly at that – especially when confronted with what appears to be a seismic shift in the global economy and investment markets. Consequently, they won't move until they are "certain" that they are not just right, but that everyone else is shuffling in the same direction at more or less the same pace.

The action in Gold Prices of late, which saw the spot Gold Market nudging $743 per ounce, gives me some hope that the scales are falling from the eyes of the broader investment universe.

That view is supported by a column penned for the New York Times by the highly respected and often contrarian Stephen Roach (well, contrarian for a Wall Street analyst!), chairman of Morgan Stanley Asia. Here's an excerpt:

"The more the Fed under Ben Bernanke follows the easy-money Alan Greenspan script, the greater the risk to the Dollar. Why worry about a weaker Dollar? The United States imported $2.2 trillion of goods and services in 2006. A sharp drop in the Dollar makes those items considerably more expensive — the functional equivalent of a tax hike on consumers. It could also stoke fears of inflation — driving up long-term interest rates and putting more pressure on financial markets and the economy, exacerbating recession risks.

"Optimists may draw comfort from the vision of an export-led renewal arising from a more competitive Dollar. Yet history is clear: no nation has ever devalued its way into prosperity.

"So far, the Dollar's weakness has not been a big deal. That may now be about to change. Relative to the rest of the world, the United States looks painfully subprime. So does its currency."

I probably don't need to tell you the importance of this sort of breaking away from the herd. Others look at Roach and wonder if maybe he could be right...then broach the topic delicately over martinis down at the local watering hole. Once the feedback loop confirms that the Fed, and the global economy, is indeed trapped squarely between a rock and a hard place, the stampede will begin for the sectors we are positioned in here at Casey Research, especially Gold Mining Stocks.

While Gold Prices and gold mining stocks took a hit along with the broader markets in the early August rush for liquidity – understandable, given the fact that the Gold Price had not yet begun to move – they have begun to catch the attention of the larger investor herd. This rebound is nothing less, in our view, than a preview of the portfolio protection and upside profits that the better-managed gold producers will provide in due course. 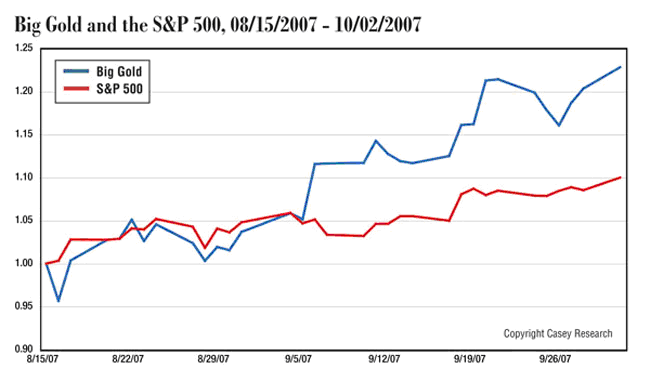 Sharp corrections make for quick turnarounds, especially when the underlying commodity – in this case, Gold Bullion Investment – is in a strong bull market. The trend is our friend.

David Galland is the Managing Editor of BIG GOLD, the highly acclaimed monthly publication from Casey Research dedicated to keeping investors closely in touch with opportunities in the precious metals producers and near-producers with larger market capitalization – those very stocks that institutional investors gravitate to during periods of crisis. Learn more about Big Gold here...