END_OF_DOCUMENT_TOKEN_TO_BE_REPLACED

Ring-a-ding for short-term traders geared up on the Dollar carry trade...

THEY DON'T RING a bell at the top, or so the old saying goes, writes Dan Denning in Melbourne for the Daily Reckoning Australia.

But all we could hear last night was cowbell and more cow bell. Granted, it was part of the percussion section of a jazz/blues/funk band playing for the opening of a new art gallery on St. Kilda Road. But we're going to take the cow bell as a warning, and dedicate today's Daily Reckoning to it.

A warning about what? Stocks, oil and Gold were all down yesterday and the US Dollar was up. But is it really the end of the Dollar carry trade? And if it is, what happens next?

We should back up a second. What is the Dollar carry trade? It's the engine of bank profit growth this year. It's what's given the illusion of financial recovery from last year's brush with death.

But as you'll learn today, the bankers, the Fed, the media...the whole lot of them...have learned nothing from 2008. The hangover was just beginning to set in, so everyone began drinking again heavily. And now the party is wild and out of control. Even the cops are drunk.

Incidentally, this complete abandonment of monetary sobriety and fiscal prudence shows up every day in real life, where the declining value of money is paralleled by a general decline in public behavior. For example, on Sunday morning we were tucking into a breakfast of banana caramel pancakes (with a scoop of vanilla ice cream on the top) when three incredibly drunk but fairly well dressed middle aged men had a seat next to us at the cafe.

They wanted to chat about the John Birmingham book on the table. They wanted to smoke. They wanted to laugh, and did so loudly to the point where they began upsetting the various dogs assembled in the sun. They ordered a pitcher of beer. They were served. It was 9am and they hadn't been to sleep.

Our cow bell tells us that the financial party thrown by Ben Bernanke may soon be ending. The Dollar carry trade, by the way, is where financial firms and speculators borrow cheap money in the US and use it to buy higher yielding assets elsewhere (like the Aussie Dollar, emerging market bonds, Gold Futures and such).

The carry trade is a bubble enabler and balance-sheet stabilizer in the short-term. The Fed keeps rates low, the banks borrow and then buy US bonds (which helps the US fund its deficit), as well as buying stocks and commodities. The Dollar carry has thus fuelled the world-wide rally more so than any phantom recovery in the real economy, where employment hasn't recovered and wage growth is hard to find. But what the Dollar carry trade has not done is fundamentally improved the balance sheets of the very financial firms that were at risk of insolvency last year.

First, the earnings rebound in the first three months of the year was not driven by better business conditions. Speaking to the Financial Times earlier this week, George Soros said, "Those earnings are not the achievement of risk-takers...These are gifts, hidden gifts, from the government."

The banks booked profits from trading stocks and bonds. And because the Fed, through quantitative easing, was supporting bond prices directly, it was as close to free money, as near to a rigged market, as you can get. With enough leverage, even small gains in bond prices were bankable.

But now there is an enormous, gut busting irony to the position the banks find themselves in. Remember that the original idea to repair bank balance sheets and restore their capital positions to healthier levels was to replace toxic mortgage-backed debt with safe, sound, and liquid US Treasuries. (Snort. Guffaw...)

The irony is that those same Treasuries could be the next big blow up, wiping out the banks thin equity capital sliver all over again, and plunging the financial sector into a second wracking round of forced deleveraging and asset sales. Round two of the recession, morphing into a Depression as the public sector ramps up deficit spending to make up for the collapse in household and business spending.

We all know how much serious the cycle of deleveraging and asset sales was last time around, so it's not a claim we'd make lightly, or without some evidence. So let's get to the evidence, starting with an article from Gillian Tett, also in Monday's FT, entitled "Rally fuelled by cheap money brings a sense of foreboding..."

"Earlier this month," she begins, "I received a sobering e-mail from a senior, recently-retired banker. This particular man, a veteran of the credit world, had just chatted with ex-colleagues who are still in the markets – and was feeling deeply shocked.

"Forget about the events of the past 12 months," he told Tett. "The punters are back punting as aggressively as ever. Highly leveraged short-term trades are back in vogue as players...jostle to load up on everything from Reits [real estate investment trusts] and commercial property, commodities, emerging markets and regular stocks and bonds."

"Oh, I am sure the banks' public relations people will talk about the subdued atmosphere in banking, but don't you believe it," he continued bitterly, noting that when money is virtually free – or, at least, at just 0.5% – traders feel stupid if they don't leverage up.

"Any sense of control is being chucked out of the window. After the dotcom boom and bust it took a good few years for the market to get its collective mojo back [but] this time it has taken just a few months," he added, finishing with a despairing question:

"Was October 2008 just a dress rehearsal for the crash when this latest bubble bursts?"

This 'latest bubble' is in evidence across all asset markets-bonds, stocks, commodities, property, and cash. Free money does not discriminate on the basis of asset class. Even Gold Futures have swollen in volume and value. But nowhere has the bubble been more generous than in the US Treasury bond market.

Short-term US bond yields – which move inversely to price – are vanishingly low. The Fed just purchased $14 billion more in mortgage-backed securities last week and now holds $776 billion in such MBS and $773 billion in government Treasury bond debt. All up, the Fed's balance sheet stands at $2.1 trillion.

But here is the thing: the Fed says it's ready to end its program of buying Treasuries and MBS. It realizes it will have its hands full funding big US deficits. But if the Fed withdraws its support for bond prices...you can expect bond prices to fall and yields to rise. This may happen even if the Fed keeps buying bonds...but creditors like the Chinese and Japanese stop, as they have already stopped buying mortgage-agency debt.

Thus all sorts of interesting things begin to happen, if by interesting you mean terrible but fascinating. Falling bond prices and rising yields would make perfect sense in a US Dollar rally. And a US Dollar rally makes perfect sense if the carry trade ends and the Dollar shorts – those traders who've borrowed greenbacks to fund speculation elsewhere – are forced to cover their debt.

Speculators take profits in oil, Gold, stocks and emerging markets...jumping back into cash and the greenback. This is roughly what happened last time the wheel's came off the financial system, leading to the near wipe-out "dress rehearsal" of late 2008. The big difference this time, is banks now have a massive new hoard of US Treasury bonds as well.

An article called "Bank Insolvency Is Not A Dead Issue" by Daniel Aaronson and Lee Markowitz shows that banks have dramatically increased their holdings of US Treasury securities. When you add their existing exposure to US real estate (now facing a rate-resetting crisis thanks to the Option-ARM bubble of two years ago) you have a huge swathe of bank collateral that could face another massive write down if interest rates rise in the market, forcing Treasury bonds lower in price. 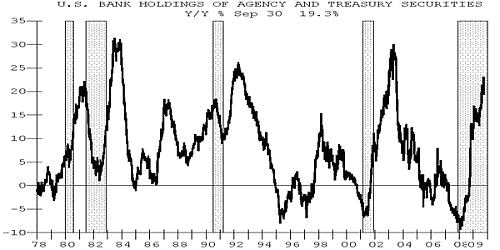 What do you think that might do the global economy?

Aside from putting a few more banks out of business, it would again cut off the flow of credit to small businesses and the rest of the economy. It might again cut off the flow of bank credit from international lenders to the Big Four here in Australia. And this time, what kind of aid can the Feds really offer when their last attempt at help (exchanging Treasuries for residential mortgage-backed securities) set the banks up for precisely the implosion they were trying to avoid? 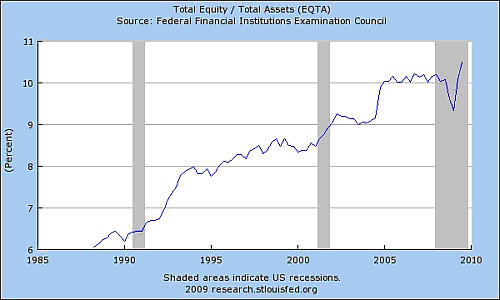 As you can see from the chart above, banks have grown assets again with the Fed's borrowed money. You now have a freshly steaming pile of recovering asset prices supported by a thin wafer of equity capital. It's a fraud with a cherry on top.

As the charts below show, US banks now own nearly $1.5 trillion in government securities. And they are gobbling them up like there is no tomorrow... 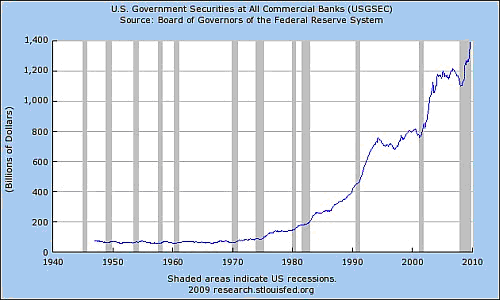 There is always a tomorrow, of course. But corporations and institutions live and die just like species. Only the earth abideth forever. And we reckon today that the entire financial industry is still dangerously close to a species-destroying event.

The leveraged model of asset growth and debt accumulation imploded last year. But the Fed has brought it back, and like a Zombie/Frankenstein mash-up, it's here to torment us all again.

So in the short-term, don't be surprised to see a stronger rally in the USD, which would take some of the starch out of oil and Gold Prices. As the dollar carry trade unwinds a little, stock markets will fall and so will other asset classes that have zoomed up on the speculation.

But the bigger story playing out is this: the entire method by which the fiscal welfare state funds itself is blowing up.

Looking for physical Gold...held outside your domestic borders and stored securely – as your outright property – for just 0.12% per year...?