END_OF_DOCUMENT_TOKEN_TO_BE_REPLACED

The Dollar oil price is the 'vital interest' went to protect...

THERE WAS much more to Hillary Clinton's China and India trip than meets the eye, writes Julian Phillips of the Gold Forecaster.

It was an acid test of the power of the United States to press its political will upon the world. The issue at hand was the US trying to halt sales of Iranian oil worldwide and to offer India the same amount of oil from other sources.

Supplies from Saudi Arabia to replace Iranian oil were already in the market place. The halting of the Iranian oil from the market would have lost 3 million barrels a day, but it seems Saudi oil capacity has added that much.

The last fortnight in the oil markets was one of great pertinence to Gold Prices, a week in which the oil price fell 10%. It seems that the extra supply coming from Saudi Arabia is not compensating for Iran's oil but now coming in addition to it –hence the fall to almost lower than break-even point for the oil producers. Unless, either Saudi Arabia withdraws this extra supply or China and India accede to Clinton's requests, the oil price will remain at these levels or fall lower.

It seems that India and China may have cut supplies as a token gesture but not enough to keep the price above $100. Of greater significance is the fact that India is paying for Iranian oil in Rupees and China is paying in Yuan. Seen from the US standpoint, this impinges on its vital interests. That 'vital interest' is not simply involving an attempt to prevent Iran from developing nuclear arms (remember the threat from Iraq's Weapons of Mass Destruction) but include the use of the USD as the sole currency in which oil is traded and priced.

It's the link of the Dollar to oil that is so critical to the United States. The value of the Dollar and its use in global trade depends upon this link. If it's damaged then the balance of power -where the US and its Dollar are the dominant financial powers in the world — is undermined. So the Iranian issue is a prelude to a fracture in the power of the US.

We have been pointing to the importance of the Dollar oil price being critical to the value of and use of the Dollar as the sole global reserve currency for years now. That link allowed a change in Greenspan's requirements for valuable money and the replacement of Gold Bullion in the monetary system by the Dollar.

Furthermore, it allowed the Dollar to exert a stranglehold on world trade that it cannot afford to see broken. Because the Dollar, as a piece of paper, can only have value through its link to oil, the Dollar became critical to the supply of basic energy needs worldwide. Oil will remain so for as long as it's used as the prime source of energy across the globe. But change its pricing to allow the use of other currencies and the link is broken.

Consequently and over the time it takes for other currencies to take a substantial market share from the Dollar as oil price currencies, the USD will wane as far as it's replaced by other currencies in the pricing of oil.

The US will do what it takes to fight for the continuance of the link, even while it breaks down. Their success rests on the strength of their hold over the oil producers themselves. The customers of the oil producers, to which the US provides security, will continue to be made to use the Dollar as payment.

So the battle for securing oil producers to the side of payers in other currencies may well become fierce in the not-to-distant-future! Take a look at the list of main oil suppliers below in terms of thousand barrels per day. 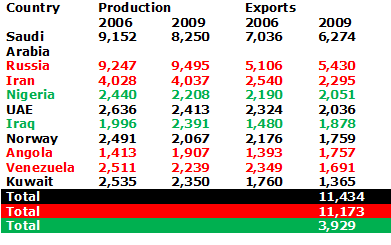 With the issue of Iranian oil now on the table, the oil price becomes a measure of the influence of the US to stop the global monetary switch to the Yuan and other currencies, in place of the Dollar. With the oil price at $92 that influence is clearly not succeeding so far.

But with the coming change in the role of the Yuan in the global monetary system, the issue gains in importance. China is not 'taking on' the US but simply growing in power. It will not bow to any other nation's political will if it is not in China's interests.

The point at which this takes away from the power of the US is rushing towards us and could be far closer than we think. Provided the currencies they do accept in payment for their oil are globally used, the oil producers above in red will be content to take currencies other than the Dollar. We must see the Yuan become a global reserve power first. This may happen next year or soon after that.

Get the safest gold at the lowest prices using BullionVault today...