END_OF_DOCUMENT_TOKEN_TO_BE_REPLACED

Money regime change coming, ready or not...
"I'M NOT buying it. Things like that don't happen in America. If anything, the Dollar will be the last man standing. You guys are going to lose a lot of money."
That was the response of a friend in the investment industry who reads my work, writes Dan Denning, co-author of The Bill Bonner Letter in Diary of a Rogue Economist.
He obviously took issue with my claim about what's driving all asset prices.
The claim?
That what you're witnessing in financial markets is the decline of paper money relative to precious metals. This "monetary regime change" is driven by government debts over 100% of GDP and rising annual government deficits.
My friend is more interested in Apple than gold bullion. That's fine. More power to him. It wouldn't be a market if there weren't different views and values.
But let me share this crucial information with you. It reinforces that no matter what happens in the short term, in the long term, the US Dollar is a dead man walking.
When gross government debt is greater than 130% of GDP, a default is almost assured.
US government gross debt will be 141% of GDP by the end of 2020, according to research published by the International Monetary Fund (IMF). By 2030, the IMF projects it will be 160%. 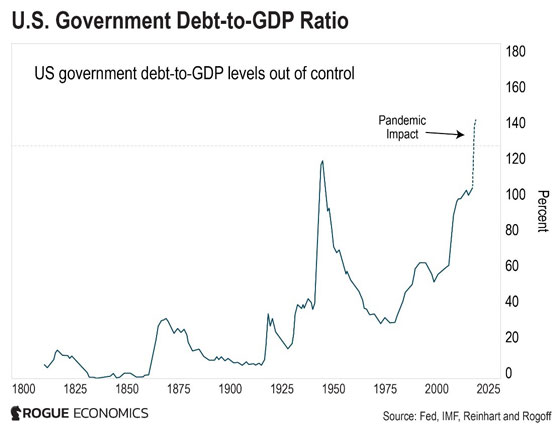 We have passed the point of no return in the destruction of the Dollar. The annual deficits and total debt will almost certainly be higher than projections from the IMF or Congressional Budget Office.
Debt levels this high have nearly always resulted in some form of devaluation, according to research from Hirschmann Capital.
Since 1800, 51 out of 52 countries with gross government debt greater than 100% have defaulted on their debts. By defaulted, I mean either a restructuring of the debt, a devaluation of the currency, outright default, or (what we expect) deliberately high inflation to make refinancing/repayment of existing debts more affordable.
This is one of those occasions where what you call it doesn't really matter. As a saver and investor, what you need to focus on is the net effect of high debt levels on the value of the currency. The value goes down. And so does the value of your savings.
It's important you don't get hung up on the technical definition of a default. Why?
Technically, the US government NEVER has to default on its debt. After all, it prints the money in which the debt is denominated. Even if there was a tax revolt, or the economy shrunk by 50%, or there was a second Civil War after the November election, the government could keep cranking the printing press to pay back owners of US Treasury bills, notes, and bonds.
It wouldn't be a default, at least not in name. But the value of the Dollar would be in freefall. In real terms – the only ones that really matter – you'd lose your fortune.
That's why any of the other alternatives – restructuring, devaluation, high inflation – all end in the same place: the destruction of wealth.
In today's America, you have a monetary policy which favors a tiny portion of the population. You have an unsustainable fiscal policy that, historically, guarantees a monetary crisis.
And you have millions of people who are angry about the status quo but can't figure out exactly why.
When the Fed's policies ultimately fail, stocks and the US Dollar will fall.
The failure of the money system will strain the bonds of civil society and lead to more authoritarian politics. Not only CAN these things happen in America, they're happening right now.
And the stock market seems to have no idea.
Earlier this year, I told Bonner-Denning Letter readers that the S&P 500 would climb to 3,500...and then crash 50%.
The first part of that prediction is happening right on schedule.
Signs of excess and euphoria abound. For example, a London-based firm says the Nasdaq 100 will hit 90,948 by 2040 as tech consumes the world. (It's currently at 12,000.) It says value investing is dead. Under its scenario, you'll see an almost eight-fold increase in big tech stocks.
Meanwhile, the market value of US stocks as a percentage of GDP – the "Buffett Indicator," that tells you whether stocks are expensive or cheap – is at 180%. The recent surge in markets has raised the market value of publicly listed companies by $11 trillion to $35 trillion.
And while Apple became the first $2 trillion company in history in August, it's Tesla shares that boggle the mind. The stock is up 520% from the pandemic lows.
Tesla now has a larger market cap than Ford, GM, BMW, Fiat Chrysler, Ferrari, VW, and Honda – combined.
And not long after blasting through $2000/per share, one analyst said pent-up demand for electric vehicles in China could drive the share price to $3,500! 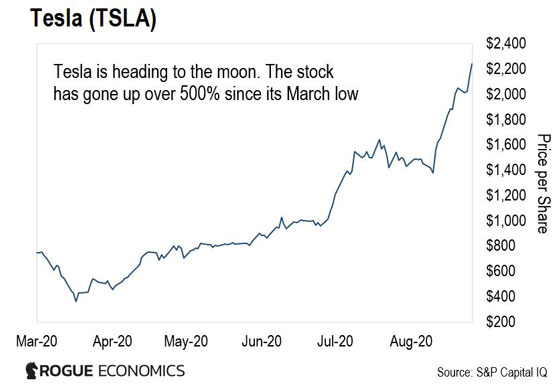 Soaring valuations, ridiculous price forecasts, and the total absence of bears and short sellers are ALL pre-incident indicators of a crash. Short interest in S&P 500 stocks is at a 15-year low, according to research from Goldman Sachs published by the Financial Times.
It's a momentum market. And the momentum is almost out of control. But I'm not going to try to convince you of the risk. At this point, if you're still reading my work, you know it's there. The question is, what should you do?
Simple: Use the tech euphoria and any selloff in gold or silver to add to your bullion positions. This may be your last chance for a long time to buy gold under $2000 per ounce. Don't miss it!
The ruination of America's money continues unchecked. There are huge financial and economic moves afoot.