END_OF_DOCUMENT_TOKEN_TO_BE_REPLACED

The Motor City's debts have finally caught up with it...
DEBT is deadly, and it's made even worse with rising interest rates that prevent you from eliminating the debt load. What happens with rising interest rates is that payments mostly go toward the interest and less to the principal. In fact, it's what I call a death spiral of debt that worsens as rates move higher, writes George Leong of Investment Contrarians.
When individuals face excessive debt, often the solution is to pare down on spending and adhere to a strict debt repayment program.
When corporations face excessive debt, they tend to streamline; but they must be careful when they do so, because any cost-cutting could impact the company's growth. What generally happens is more debt or credit is issued.
But when governments build up massive debt loads, there is no definitive solution, and it becomes problematic. The national debt is estimated to reach $17.55 trillion by the end of this year, while the country's total debt, including federal, state, and municipal debt, is earmarked at $20.54 trillion. (Source: USGovernmentDebt.us, June 18, 2013.)
Congress and Obama must resolve the national debt limit.
Take a look at the chart below of the national debt from 1970 to today (blue bars), and the projected national debt to 2018 (red bars). What's made clear from this chart is not only the steady buildup of national debt but the rate of the buildup since early 2000, especially following the Great Recession in 2008. It's obvious that the national debt is spiraling out of control. 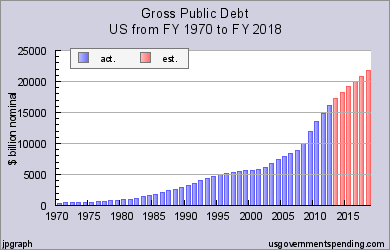 Chart courtesy of www.USGovernmentSpending.com
Despite the popular adage "a picture is worth a thousand words," this chart of the national debt can be defined by one word: debt.
That's why the Federal Reserve and the US government must deal with the country's massive national debt load—and how it's getting out of hand.
But not only is the national debt an issue, the debt buildup at the state and municipal level is also a major concern that needs to be addressed. By the end of this year, the debt amassed by the state governments is estimated to reach $1.19 trillion. (Source: Ibid.)
What's alarming is that the municipal, state, and federal governments will inevitably be subject to a cash crunch when yields and interest rates ratchet higher.
As I recently mentioned in these pages, we're seeing debt issues in many states that are vulnerable to rising interest rates, and not only with the federal debt.
Recall that California and its municipalities have accumulated a debt load of about $848 billion, which could eventually be eclipsed by $1.1 trillion, according to The California Public Policy Center. (Source: "Report: California's Actual Debt At Least $848B; Could Pass $1.1T," CBS web site, May 1, 2013.)
And then this past Monday, we found out that the city of Detroit, which has been ravaged by decades of slow growth and major population decline, has run out of money after defaulting on roughly $2.5 billion in unsecured debt. The city is trying to convince its creditors to accept $0.10 on the Dollar to eliminate this debt. (Source: Williams, C., "Emergency manager: Detroit won't pay $2.5B it owes," Associated Press, June 14, 2013.)
But the problem won't stop there, because Detroit will need new funds to survive, and based on the city's default and low credit rating, the cost of the loan would likely be significant.
So, while the stock market rises to new records and new millionaires surface each day, the real problem will be when rates move higher and debt payments become unmanageable.