END_OF_DOCUMENT_TOKEN_TO_BE_REPLACED

Destroy currency and you destroy society...

AUSTRALIA'S central bank, the Reserve Bank of Australia, has been exceptionally lazy when it comes to matching the interest rate cutting zeal of the rest of the planet, writes Daily Reckoning Australia editor Dan Denning.

Even though the RBA cut rates by 1.25% in 2012, it has failed noticeably in pumping asset prices up. It's time to do some catching up.

The data supports this view as well. Building approvals fell by 5.5% in March, according to figures released yesterday from the Australian Bureau of Statistics. It was the biggest fall in eight months. It was also a punch to the nose of the RBA and its master plan for the economy.

The RBA had hoped that last year's rate cuts would filter through into the economy this year in the form of a new, non-mining, building boom. But yesterday's numbers show no evidence that the end of the resource bull market will be followed by another housing boom. It's time for the RBA to pull the emergency rate cut lever and weaken the currency (by the way, we don't really believe this...we're just channeling the clap trap sure to emanate from the mouths of big bank economists whose institutions would love lower rates).

And after all, everyone else is engaged in competitive currency devaluations. Why should Australia sit it out? In the statement released after its April/May meeting, the Federal Open Market Committee said it would continue to buy $40 billion a month in mortgage-backed securities and $45 billion a month in US Treasury bonds and notes. That's $85 billion all up, if you're scoring home. Here was the critical passage:

The Committee will continue its purchases of Treasury and agency mortgage-backed securities, and employ its other policy tools as appropriate, until the outlook for the labor market has improved substantially in a context of price stability. The Committee is prepared to increase or reduce the pace of its purchases to maintain appropriate policy accommodation as the outlook for the labor market or inflation changes. In determining the size, pace, and composition of its asset purchases, the Committee will continue to take appropriate account of the likely efficacy and costs of such purchases as well as the extent of progress toward its economic objectives.

Parsing Fed statements is about as much fun as flaying your own skin with a potato peeler. But in this case, a glance at the sections we've highlighted shows you how committed the Fed is to a policy which destroys the currency, props up stock prices, and does nothing for the economy. It's impressively ignorant.

Quantitative Easing (QE) has failed to reduce American unemployment or spur economic growth. That's because all the money the Fed pumps into the economy ends up as excess reserves back at the Fed or goes right into the stock market. That's also why it never shows up as consumer price inflation. It's asset price inflation (for now, until the currency crisis, at which point all hell will break loose).

For an example of how you might put this deliberate stock price inflation strategy to work for you, check out the chart below. We put it together this morning as a test of the theory that blue chip stocks may be the best way to front-run an even bigger expansion of QE in 2013.

This chart shows the New York listing of Nomura Holdings over the last year compared to the Nikkei 300. Nomura is one of Japan's big financial stocks, and as such is a proxy for the financial sector. Both Nomura and the Nikkei took off in November of 2012, when Japan initiated hostilities against its own currency. Nomura is up 100% since November alone, doubling the return of the index. 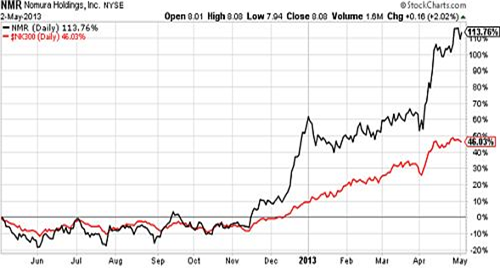 A trade like this is out and out speculation, of course. But it makes sense in a certain perverted, embrace-the-asset-hyperinflation kind of way. Financial firms are bound to benefit from ultra-low interest rates and cheap capital. And Japanese investors fleeing a falling currency and low rates will naturally gravitate to the core of the world's financial system, US Dollar-denominated assets, even as that system begins to melt up.

The central bank war on interest rates ought to benefit blue chip stocks the most. It's not that blue chip stocks have become less risky than sovereign bonds, or that they will suddenly become more profitable as the global monetary base expands. It's that capital has to do something more productive than sit in fixed income instruments that have a negative real return, even if they are 'safe.'

Even the Europeans are adding their muscle to the fight. The European Central Bank (ECB) cut its main refinancing rate by 25 basis points last night, from 0.75% to 0.50%. There's not much further to go. The stodgy Germans with memories of hyperinflation may make their stony-faced objections. But don't be surprised if the ECB finds a way to purchase government bonds this year, or any other asset for that matter.

This is not a great market to invest in. The stupid people are out in force today. But relying on the greater fool for your trading strategy is really no strategy. That's the point about inflationary booms. They aren't rational or strategic. They're driven by the consistent depreciation in purchasing power and the attempts to find a way to beat it, or by asset inflation that sucks in mindless buyers before falling apart.

Sometimes, as with thermonuclear war, the only way to win a game is not to play it. This is what the supercomputer Joshua concluded after running countless simulations in the 1983 movie War Games. And this is what the French elites did during the Revolution. They used the inflation in assignats as a chance to exchange financial wealth for tangible wealth.

The people who ultimately suffered from the currency collapse were the middle class, whose savings were wiped out. And for those whose only asset was an income denominated in a worthless currency, it was an unmitigated disaster. The working class would benefit the most from a sound money regime, but always suffer the most from hyper-inflation, where everything rises in price except wages.

And it had all started so promisingly in 1790. The new National Assembly came up with a scheme to nationalize the lands of the Catholic Church. Upon that landed collateral, or security, they would issue 400 million in large-denominated notes. The notes would yield 5%, and would be suitable for the purchase of seized Church lands.

The scheme would transfer property from the Church to the supporters of the Revolution and the proceeds from the currency issue would be used to pay down the public debt, at which point the notes would be destroyed, preventing inflation.

But before 1790 was over, the yield on the notes (designed to prevent their circulation as currency) was cut from 5% to 3%. Shortly thereafter it was eliminated altogether. The notes became currency. And the National Assembly found it irresistible to issue even more, having enjoyed the benefits of the first so much.

And so the French embarked on the timeless path of civilizational destruction by way of currency debasement and the issues of irredeemable paper money. Each subsequent issue of new notes had a shorter and weaker impact on the economy. By 1793 assignats had lost 60% of their original value.

As inflation accelerated, so did the bloodthirstiness of the rational lunatics running the Revolution. The death throes of paper money and political disorder go hand in hand. You can't have political liberty without sound money. With hyperinflation, you get tyranny.

After just seven years, France's money supply had increased by twenty times. Revolutionary leaders instituted price controls and draconian penalties for any merchant or farmer who refused to use the currency at face value. Jail terms of four years and later, the guillotine, were introduced to force the use of the assignat. Gold and silver were banned.

France tore itself a part. The paper money crisis exacerbated the political crisis and the economy ceased to function as prices no longer bore any reality to the cost of production or the value of anything. Eventually, the people turned toward the strong man for order, just as Germans would after the Weimar inflation.

Is Quantitative Easing the same as money printing? Can what happened to France in the eighteenth century happen to the entire world in the 21st? We're about to find out.