END_OF_DOCUMENT_TOKEN_TO_BE_REPLACED

What the deflationist argument misses about today's monetary mayhem...

AN INTERESTING ARTICLE by Ambrose Evans-Pritchard of The Daily Telegraph came my way the other day, writes David Galland, managing editor of The Casey Report.

It's worth a read, if for no other reason than that he paints an appropriately dark picture of the current state of the US economy.

And while I very much share Evans-Pritchard's view that the global economy is far from out of the woods, our views diverge in that he sees devastating deflation speeding our way down the tunnel. Casey Research readers of any duration know that we see devastating inflation instead.

We both could be right, perhaps with deflation first and inflation later. But I'm not so convinced. For starters, there is already a massive inflation operation being run by the Federal Reserve, evidenced in a historic spike in the monetary base over the last two years. 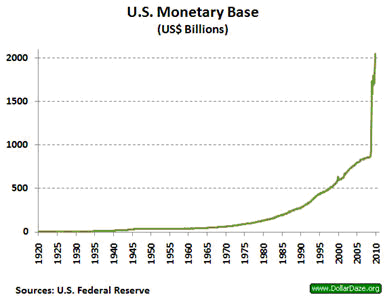 And the Obama administration is far from done. The Democrats' reinvigorated focus on jobs – the single most important factor in this November's elections – will soon translate into a flurry of new initiatives designed to put people back to work, most of it funded at taxpayer expense.

To believe in the deflationary case would seem to require believing that Obama and his minions are ready to forgo any further political aspirations by collectively putting their feet up on their desks for the balance of their sole term at the apex of global power. But given Obama's meteoric rise to power – evidence that he possesses a certain drive and competence in the game of politics – that seems highly unlikely.

It seems safe, therefore, to assume we'll soon witness a redoubling of his efforts to keep interest rates down...to make it easy and cheap for strapped consumers and businesses to keep borrowing...and to otherwise flood the economy with money.

In a deflation, the value of the money increases – which is actually a pretty desirable thing, if you ask me. Inflation, by contrast, means that pretty much everything you own in the local currency steadily loses value – forcing investors into a perpetual game of catch-up. It's hard for me to calculate how the government can dramatically increase the money supply and yet have each of the currency units become increasingly more valuable over a sustained period of time.

Arguing against that point, Evans-Pritchard makes the case that the US government is making much the same mistakes that were made in the first part of the Great Depression, i.e. being overly tight with the money. And that the velocity of money is falling.

There are a couple of key differences between now and then, however. First, the Fed didn't actually know what the money supply was back then. They literally had no monitoring tools in place, mostly because no one thought it was important enough to track. Second, they didn't have fiat monetary powers. Today, neither of those factors apply.

Everyone knows what the money supply of the US is and watches it keenly. Including our foreign creditors. And so it is not surprising to see the Fed publicly talking about tightening up a bit. But it's just talk at this point.

With the economy continuing to struggle, the only reasonable assumption that can be made is that the Fed – in cahoots with the entirely politicized Treasury – will keep shoveling money onto the economic embers, and continue to do so until economic activity again flares up.

That will, of course, require increasing the quantity of money that actually makes it into the economy – but that should be child's play for Team Obama – with direct hiring and spending, continuing to buy mortgages and other loans to suppress interest rates, forgiving the bad debts of banks, or changing accounting rules so that banks can postpone reckoning day. And that's just for starters, all of it packaged nicely in the name of the public good.

And once the money starts to flow, there will be a pick-up in economic activity, which will beget yet more money moving around. At first, this money will be a palliative for the economic worries, but then comes the inflation – a small trade-off, the politicians will decide, if it buys them enough of a recovery to make it through the November elections and get the president the second term you know he so strongly desires.

There is something else that I think the deflationists are missing, and that has to do with confidence in the currency. If the US's many creditors come to agree with our point of view – that the Dollar is being led to the altar as a sacrificial lamb to political expediency – then they'll further reduce their purchases of our Treasuries and start trading their Dollars for stronger currencies and tangible assets, including precious metals.

At that point, interest rates will have to begin rising to attract new buyers. As you can see in the chart of long-term Treasury bond rates, a significant move off recent lows has already occurred, and rates are looking poised for a breakout to the upside. 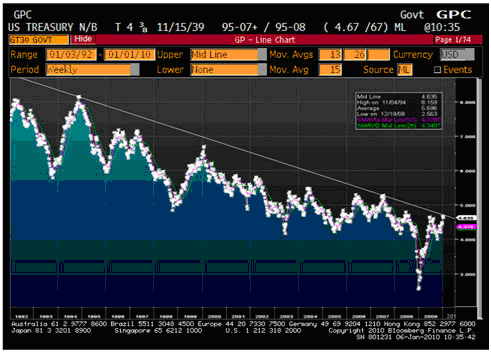 Of course, the higher those rates ratchet, the more it will cost the US government to carry its massive debt. While rising rates will continue to drive demand to the short end, suppressing those rates, in time the sheer quantity of paper that will have to be rolled over, and the rising tide of inflation, assures that short-term rates will have to rise too.

At that point, the train begins to leave the track.

I know what you're thinking: C'mon, let's be realistic – that could never happen. Think again…

Advocates say a $290,000 (€203,180.83) speeding ticket slapped on a millionaire Ferrari driver in Switzerland was a fair and well-deserved example of the trend.

Germany, France, Austria and the Nordic countries also issue punishments based on a person's wealth. In Germany the maximum fine can be as much as $16 million compared to only $1 million in Switzerland. Only Finland regularly hands out similarly hefty fines to speeding drivers, with the current record believed to be a €170,000 (then about $190,000) ticket in 2004.

The Swiss court appeared to set a world record when it levied the fine in November on a man identified in the Swiss media only as "Roland S". Judges in the eastern canton of St. Gallen described him as a "traffic thug" in their verdict, which only recently came to light.

"As far as we're concerned this is very good," Sabine Jurisch, a road safety campaigner with the Swiss group Road Cross.

Or maybe the government will force you to convert some or all of your IRA or 401(k) into Treasuries, perhaps packaged up in an annuity. You'd be given the choice of making the switch or making a withdrawal and paying all outstanding taxes at that point. This is something that Doug Casey has warned about for several years now.

The seeds of that possibility may be headed for the soil: the following article from BusinessWeek reveals that the Treasury is now looking very hard at the trillions in retirement accounts and trying to figure out new ways to "help" the owners of those accounts.

In my view, what's important in this little dissertation can be summed up as follows:
The current administration and its congressional allies have powerful political motives to soak the economic soil with fresh Dollars. The Christmas Eve announcement that the Treasury is removing the $400 billion cap on losses it will cover for Freddie and Fannie is a classic example of how far they are willing to go to keep the money moving.

Unlike the Great Depression, the US is now on a fiat money system – which is purpose-built for the current scenario. Open the taps, and if that doesn't work, open them even wider. Failing to do so would be political suicide, and Obama and his team are just not into the idea of serving a single term.

Given the size of foreign holdings of US Dollars, the nation is faced with a "rock and a hard place" situation, where a sharp loss in confidence on the part of our creditors would likely lead to a currency crisis that drives the value of the Dollar quickly lower, at the same time that it drives interest rates higher.

Something will have to give. We think that something will ultimately be the US Dollar, as it's politically more acceptable to have a failing Dollar than a smoking hole where the economy used to be.

Before this thing is over, I would not be surprised to see a new currency regime adopted that introduces exchange controls and a different category of Dollar to be issued for the purpose of paying back foreign creditors. Such a dual-track currency system is nothing new but has been used by desperate regimes numerous times throughout history.

Forecasting the future is actually impossible, as there are just too many variables. But that doesn't mean that we can't step back and make certain logical assumptions about the policies the politicians are most likely to deploy in their efforts to retain power.

In the case of today's world, the only politically logical decision will be to keep on spending until that spending itself becomes a pressing problem, at which point the politicians will turn their attention to "solving" the newest in a long list of problems they have created.

At which point they will no doubt find some creative way to blame the inflation on speculators, profiteers, and the free market.