END_OF_DOCUMENT_TOKEN_TO_BE_REPLACED

Deflation is in a bull market according to US Treasury bond buyers...

EVERYONE AGREES that a deflationary deep-freeze is paralyzing the global economy, writes Eric J. Fry of The Rude Awakening.

Everybody also knows, therefore, that inflation is as good as dead. The sellers of stocks know it; the buyers of long-dated Treasury bonds know it; and the sellers of TIPs (Treasury Inflation-Protected bonds) know it better than anybody.

When so many financial market participants are certain about anything, a forward-looking investor might want to challenge the thesis...just to see if there's a chance of making a few bucks out of the herd's mistake.

As the chart below clearly shows, the prices of long-dated US Treasury bonds have been soaring, whiles the price of TIPs has been falling. (They're represented here by the iShares 20+ Treasury Bond ETF and the iShares Treasury Inflation Protected ETF respectively). Most long-dated TIPs have tumbled 15% in the last two months alone. 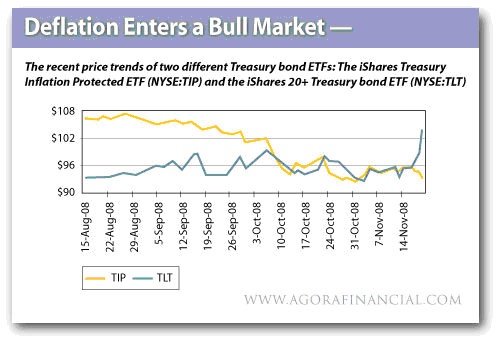 But is deflation such an utter certainty that investors should be scooping up 10-year Treasury bonds yielding a record-low of just 2.73%...?

To pose our question the other way around, is inflation really such an impossibility that investors should be unloading 10-year inflation-protection (in the form of Treasury Inflation Protected Securities) that currently yield 2.40%, but could produce a vastly greater return if inflation heats up?

Investors in long-dated Treasury securities seem to have convinced themselves that inflation has been "deep-sixed" not just for the next two or three years, but for the next 10 to 20 years as well. The cost of taking the other side of that trade has never been cheaper.

TIP-buyers beware, however! The other side of the trade is not without risks. A potent deflationary trend would depress the value of TIPs, both in absolute terms and relative to conventional Treasury bonds. Because, in such a circumstance, TIP prices would fall as deflation became a fact...and they'd fall a lot.

At maturity, of course, the TIP-buyer would still receive at least "par" for his bonds. But no investor wants to wait a decade or more to see the return of his capital. And while, as noted above, the conventional 10-year Treasury bond yields just 2.73%, it's still 71 basis points more than the 10-year TIP yield of 2.30%.

The TIP-buyer accepts yield penalties like these in exchange for the comfort of inflation protection. But comparing current yields is only one small part of the calculus that leads an investor to either buy or shun a TIP. The most important aspect of the comparative analysis is the "implied breakeven inflation rate". In other words, what would the average inflation rate need to be during the life of a given TIP to make it a better buy than a conventional Treasury of the identical maturity? 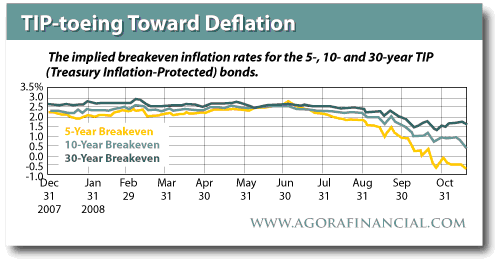 Lately, a very strange thing has happened in the TIP market: breakeven inflation rates have collapsed to all-time lows. The 10-year TIP, for example, is pricing in a razor-thin inflation rate of just 0.3% per year during the next 10 years.

Put another way, if the inflation rate averages more than 0.3% per year during the next 10 years, the buyer of a 10-year TIP at today's prices would be better off than the buyer of a conventional 10-year Treasury bond. The inverse would also be true.

Let the reader decide, therefore, whether the average US inflation rate will exceed 0.3% per year during the next decade. [Ed.note: Inflation on the official CPI measure averaged 2.83% over the last 10 years, and 3.0% during the 1990s. Only one decade last century saw inflation average less than 0.3%, and that was during the 1930s – back when the United States remained on the Gold Standard, even as Europe abandoned it. US prices fell 1.9% per year on average; here in the United Kingdom, which quit Gold in Sept. 1931, inflation turned positive in 1934 and then averaged 1.5% per year until the start of WWII.]

But before deciding today, let the reader also do enough homework about the quirky world of TIP securities to avoid making unintended errors.

One of the easiest – and costliest – errors a TIP-buyer could make would be to underestimate the capital-destroying potential of a severe deflation. If the Consumer Price Index were to decline sharply for a sustained period of time, the price of a long-dated TIP would also decline sharply. Furthermore, the current yield provided by the TIP would decline at the same time – a deflationary double-whammy.

Thus, the TIP buyer's world is very simple: inflation = good; deflation = bad. But therein lies the appeal of these unique securities as well. Inflation is rarely a good thing for the value of a financial asset, but it is a good thing for a TIP. And when the central banks of this world flood the global monetary system with titanic quantities of credit and currency, an inflationary uptick does not usually trail far behind.

When the US Federal Reserve pours so many trillions of dollars into the US financial system that an $800 billion bailout seems like nothing at all, an inflationary uptick becomes increasingly likely.