END_OF_DOCUMENT_TOKEN_TO_BE_REPLACED

How you can avoid my Great-Aunt Nan's financial fate...

MONDAY SAW the latest development in the US debt crisis, writes Martin Hutchinson, contributing editor to the Money Morning email.

Standard & Poor's finally downgraded its outlook for US debt to "negative," from "stable."

That's right: Of the 17 countries that S&P has rated AAA, the United States is the only sovereign that carries with it a negative outlook.

This merely confirms what we've been saying all along about the complete lack of fiscal discipline on display in Washington - and it has potentially dire implications for the US economy.

Fortunately, as an investor, there are steps you can take to safeguard yourself against the abhorrent fiscal and monetary policy that has resulted in this US debt crisis.

I'll get to that later - but first, let's examine how we got to this point...

First, the obvious: Deficits are a lot harder to get rid of than they are to incur.

That's particularly true in the United States, where spending cuts and tax increases are very hard to enact, and spending increases and tax cuts virtually enact themselves.

Remember, the $787 billion US Recovery and Reinvestment Act was passed in a couple of weeks in 2009, whereas it took Congress three months and a near-shutdown of the government to agree on a mere $38 billion of 2011 spending cuts.

Traditionally, governments thought they had little alternative but to balance the budget, or risk an economic collapse. The required self-discipline was best demonstrated by Lord Liverpool's British government, which in 1815 inherited the largest public debt that any country has successfully conquered - about 250% of Britain's 1815 gross domestic product (GDP).

Even back then, there were voices like Henry Brougham advocating a loose monetary policy that would reduce the real value of the debt, satisfying the government's obligations by cheating the bondholders. Liverpool's government, however, was made of sterner stuff; it raised taxes on imported food through the notorious Corn Laws, took the country back on the gold standard - which involved a price deflation of about 20% -- and cut public spending to the bone.

The short-term result was a huge economic boom, which within a decade produced substantial budget surpluses and reduced the debt's burden to manageable levels. The long-term result was a century of stable prices and prosperity, at the end of which the debt was lower in nominal terms than it had been in 1815, and GDP was about 10 times higher.

The blame for eradicating that admirable attitude towards deficits and debt can be laid squarely at the feet of John Maynard Keynes. His spurious justifications for increasing government spending in depressions and reducing it in booms were used to create deficits, and never surpluses (except accidentally, as in 1998-2001).

When Britain in 1945 was faced with a similar but smaller debt problem to that of 1815, it increased public spending rather than decreasing it, and sorted out the debt by creating inflation. Thus it balanced the government's books by robbing bondholders like my Great-Aunt Nan, who was reduced to penury before her death in 1974.

It is now very clear that the approach of US President Barack Obama and Federal Reserve Chairman Ben S. Bernanke to public debt is similar to that of the British leaders Clement Attlee and Hugh Dalton after 1945. They created a huge wave of unproductive spending when faced with recession in 2009, most of which became locked into the "baseline" expenditure for future years - thus preventing the budget from ever approaching balance.

Their strategy for tackling the resulting debt is the same as that of Britain after 1945: Create inflation and watch it magically melt away, becoming a smaller and smaller percentage of a GDP that is inflating in nominal Dollars.

Of course, there are two problems with that approach. One is that there are no longer sweet old ladies like my Great-Aunt Nan that can be leveraged to absolve the US debt crisis. Instead, much of the debt is held by Asian central banks and the Middle Eastern ultra-wealthy. They probably won't like being swindled in this way, and will find some way of getting revenge. 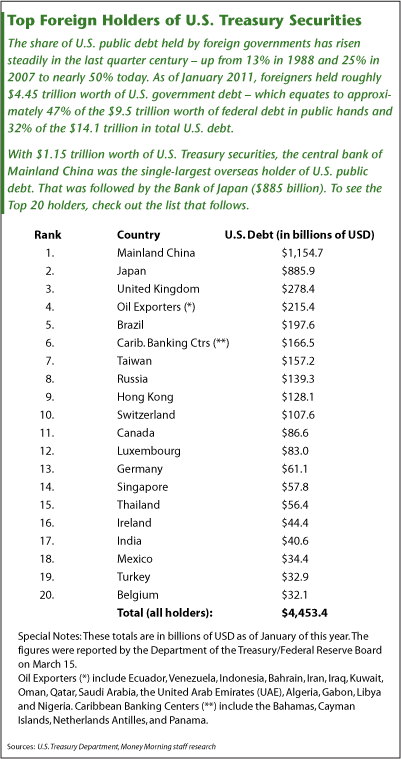 The second problem is that the policies of ultra-low interest rates, huge public deficits and increasing inflation are very bad for the real economy. They encourage banks to engage either in speculation or to simply buy government bonds and finance them short-term. Neither activity directs money to small businesses, which create jobs.

Companies also are encouraged to invest in new factories, mostly outside the United States, while cutting labor forces to the bone - since capital is cheap and US labor is relatively expensive.

Those two factors explain why GDP growth in this recovery has been sluggish and high unemployment has been so persistent. Indeed, long-term unemployment is almost half total unemployment at present, far above its level in previous post-war recessions - and that's not counting those who drop out of the workforce altogether.

Worse, years of ultra-low interest rates are as bad for the nation's social fabric as they are for the economy as a whole, because they produce a huge pool of unemployables, encourage gambling, and discourage true entrepreneurship and hard work.

Liberals inclined to doubt my analysis should reflect on one thing: What kind of society do we have when Donald Trump is leading the polls for the Republican Presidential nomination? If the Fed had maintained normal interest rates following the recent real estate crash, that overleveraged real estate and casino speculator would be too busy fighting for his financial life to finance a run for high office.

The Bottom Line: Liverpool's budgetary austerity was rewarded by a massive economic boom, which was the core of the first Industrial Revolution. And the United States would see similar results if it made that approach its own.

Of course, that is hopelessly unlikely in the near term, so Buy Gold and sell Treasury bonds. It won't entirely mitigate the economic unpleasantness ahead, but it will help you avoid the sad financial fate of my Great-Aunt Nan!

The US Federal Reserve's loose monetary policy and the Congress's inability to rein in the US debt load have undermined both the Dollar and the economic recovery.

There is no safe place to hide, but owning gold and other precious metals like silver could go a long way toward preserving your wealth.

In fact, I would recommend you have at least 15% to 20% of your portfolio in gold and silver, the traditional inflation hedges.