END_OF_DOCUMENT_TOKEN_TO_BE_REPLACED

What will actually happen if Congress doesn't raise the debt ceiling...?

PRESIDENT OBAMA had this to offer earlier this week:

"Let me distinguish between professional politicians and the public at large," he said.

"The public is not paying close attention to the ins and outs of how a Treasury auction goes," he supposed before adding, we guess for reassurance, "We're paid to worry about it."

Never mind professional politicians are the reason we have a debt problem in the first place, says Addison Wiggin, editorial director of the Daily Reckoning.

And so you have a choice, dear reader: Follow the president's advice and don't worry about the backdoor debt ceiling deal they're cooking up...or read on and prepare yourself for the consequences of what the "professional politicians" have wrought.

"I'd love to see the size of the US bubble," a reader wrote to us recently, "and where it would fit on the debt-to-GDP chart."

Yes, it's big bubble indeed. In fact, it dwarfs the size of the problems currently threatening to tear the European economy asunder. Here, for ease of comparison, we've superimposed a yellow circle representing the United States: 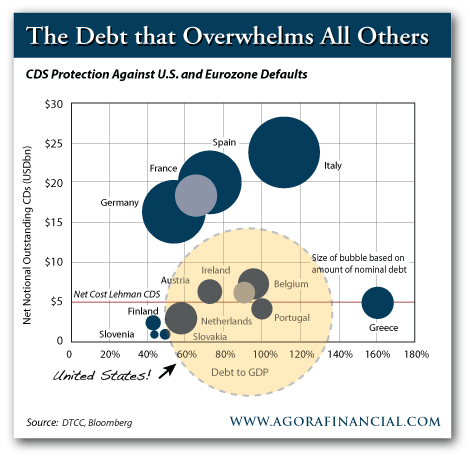 The US national debt is 5.5 times that of Italy – the largest debt in the Eurozone and the cause of so much consternation in the markets this week. But the real story lies in the center of the yellow circle on this chart.

First, check out the bottom scale, plotting each nation's debt-to- GDP ratio: With a $14.3 trillion national debt and a $14.7 trillion economy, the US debt-to-GDP ratio is just shy of 100% – near Portugal-Italy territory, though not as bad as Greece.

Then there's the left scale: credit default swaps – the "insurance policies" paid by the buyers of these nations' government debt to cover themselves in the event of a default.

As you might recall, roughly $4.5 billion in default swaps was enough to wipe out AIG, then the world's largest global insurance firm... with the requisite unassailable record.

The cost of insuring against US government debt, while still low, has grown significantly since mid-May. 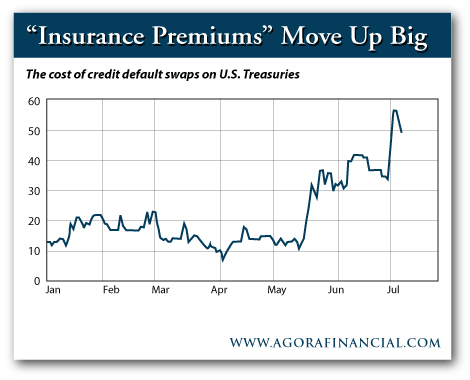 By this reckoning, Uncle Sam is now a worse bet than Germany.

The rise in the price of US CDS coincides with the drama in Washington over the August 2 debt ceiling deadline. According to the Bipartisan Policy Center, tax revenue for the 29 days of August after the 2nd will total roughly $172.4 billion. That compares to $306.7 billion in spending.

Ordinarily, the Treasury would cover that $134.3 billion gap by issuing new Treasury debt. But after August 2, it won't be able to do so. That means Uncle Sam would have to immediately balance his books.

Well, he'd have to choose his priorities. The Bipartisan Policy Center report breaks down the government's August 3-31 expenses in a way that shows what the $172.4 billion in revenue can cover...and what it can't. 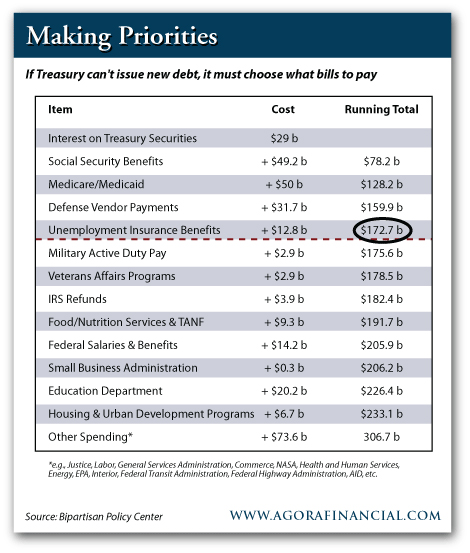 They can move certain items above the $172.4 billion line and others below it... but something has to give. And, believe it or not, matters are even worse than that list of priorities reveals.

About $507.4 billion in existing Treasury securities come due between August 3-31. To "roll over" that debt, the Treasury must issue new securities. What if the unthinkable happens, and the government isn't able to "roll over" the debt?

$100 billion of that debt matures on August 4. Another $100 billion matures a week later, on August 11. That eats up the entire $172.4 billion in revenue expected for the month right there...before the government spends a penny on anything.

Unless the Treasury Department is sitting on some slush fund we don't know about, it's game over. The United States defaults...triggering those credit default swaps.

"Let's imagine," said a Newsweek piece by Daniel Gross last spring, "a world in which the US government, lacking the will to tax or cut spending, can't scrape up the cash to stay current on interest payments and can't roll over debt as it matures.

"That would trigger a huge decline in the value of Treasuries and mortgage-backed securities. The balance sheet of every US financial institution – JPMorgan, Goldman, Citi, your neighborhood bank, the Federal Reserve, money-market funds – would be decimated. There wouldn't be a single solvent bank, insurer, or company in the United States.

"The large multinational banks, which have significant US operations and plenty of this stuff on their books, would likewise be wiped out. Oh, and foreign holders of US debt...would be toast, too.

"In this dystopia," continued Gross, "who, precisely, would be able to make good on the insurance sold on US government debt? The last time we had a set of events that were supposed to trigger large- scale payment of credit-default swaps, the system basically shut down. All the investors who bought insurance on financial instruments from AIG got paid off in full only because the US government bailed the company out.

"Who would bail out the Treasury Department and the Federal Reserve?"

Considering gold as your crisis insurance? Discover how BullionVault makes it cheaper, easier and more secure – while removing risk of counterparty default...