END_OF_DOCUMENT_TOKEN_TO_BE_REPLACED

If true, and we suspect there is justice here...

...and the United States is a nation of no-good deadbeats.

The nation hosts a spendthrift government perpetually on the borrow.

By some metrics, the United States now takes on more debt in one year than it did in the first 200 years of its lovely existence.

The Congressional Budget Office (CBO) projects it to exceed $23 trillion by 2020.

We refer you to the following chart for some slight sense of perspective: 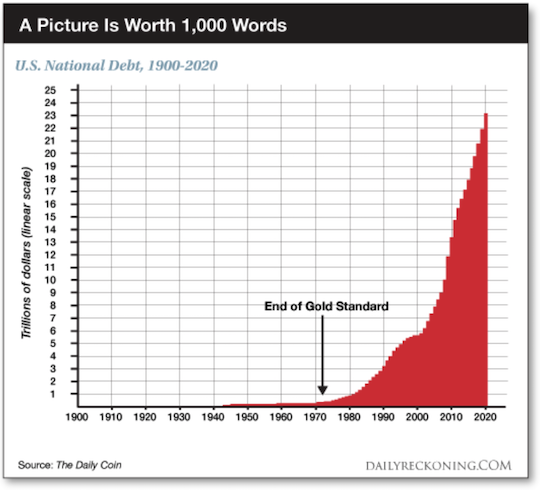 The United States Treasury will likely borrow $770 billion by the end of the year – a 60% increase over last year.

This April the CBO projected the federal budget deficit would scale $1 trillion in 2020.

But last month it was forced to reverse its projections one full calendar year...to 2019.

$523 billion the United States spent servicing its debt in fiscal year 2018 – another record.

It is a record that will not stand long.

Rising interest rates will increase the debt burden hung around the nation's neck...like a giant boulder.

Within a decade, it may spend over $900 billion annually to service its debt – nearly 25% of the entire budget.

But somehow the business seems beyond all human agency, all control.

It is simply the way the machinery operates, a fellow concludes.

He may cluck-cluck his opposition to it – and who doesn't?

But he is largely a man resigned.

Besides, he bellows, it is the fault of the big-spending politicians sitting at Washington. Not himself.

Is the glad-handing, vote-seeking politician solely to blame for the nation's grim finances?

No, argues Paul Van de Water, senior fellow at the Center on Budget and Policy Priorities.

Look thyself in the mirror, citizen:

"Even voters who say they're against deficits would also prefer lower taxes."

We are forced to agree.

The free lunch has eternal appeal. Put it on the menu and it never comes off.

But is it necessarily in the nature of democracies to run down the nation's finances...to lunch free of charge?

Perhaps it is not democracy as such to blame...but the character of a particular people.

Ancient Athens – by all rights a democracy – amassed a vast public treasury in its Golden Age.

That treasury remained unmolested until wartime, even though it was there for the asking. The citizens of Athens were free to vote themselves the manna.

But they did not.

Author Freeman Tilden, from his neglected 1935 masterwork A World in Debt:

"At one time the Athenians had in their citadel more than 10,000 talents of silver [roughly $165 million in 2016 Dollars]; and what is more significant, they did not tap the resources until forced by the necessity of war."

"What an ambitious and high-spirited people was this, to collect and keep in their treasury a sum which it was every day in the power of the citizens, by a single vote, to distribute among themselves!"

Nor did Athens take to the swindle when it was in a bad way – no clipping of coins, no debasing the currency.

"The most brilliant democrats that ever lived, the Athenians, made tragic mistakes of policy...But with all their blunders, the Athenians never, as free men, indulged in the final madness of debasing their currency: They never became swindlers...Athens rose in trade by means of establishing good credit and by safeguarding the honor of her coin. In the most terrible years of her history, when the treasury was empty...she was indeed obliged to strike emergency coins of gold and bronze, but never consented to debase her coinage."

Safeguarding the honor of its coin?

The United States Dollar has lost 95% of its value since the Federal Reserve went on duty in 1913.

But out of respect for the nation's monetary authority and the high dignity of its office...we shall refrain.

Were the ancients hammered from nobler metal than us moderns? Had they greater virtue?

More than Athens, the Founders set the American form of government to the Roman model.

But was not Rome a bedlam of vice and debauchery?

Did not Nero fiddle while Rome burned?

Did not Caligula famously name his horse a consul?

Yes, but the Founders looked to the early Roman Republic for its example – before Caesar went across the Rubicon – before Nero fiddled.

Virtue, public service were the pole stars of the early Roman Republic.

Consider the Battle of Cannae in 216 BC.

Rome lost 50,000 men to Hannibal's berserkers in one single day (America lost a comparable number in over a decade of Vietnam).

Was it the dregs of Rome that went to their graves that day?

No. The Roman Senate lost almost one-third of its members in the Battle of Cannae.

"This suggests," notes historian Peter Turchin, "that the senatorial aristocracy was more likely to be killed in wars than the average citizen."

If a nation gets the government it deserves...the citizens of the early Roman Republic must have been made of pretty good stuff.

Imagine – for one passing moment if you can – a United States senator on the front lines of battle.

Then return to your senses.

Meantime, Turchin informs us that the wealth of Rome's top 1% was perhaps 10-20 times a commoner's at the height of the Roman Republic.

By the time of Rome's terminal imperial decline...that figure may have risen to 10,000 times.

America's numbers aren't quite so out of joint – yet.

Benjamin Franklin was present when the Constitutional Convention concluded in September 1787.

Upon his departure from the old Pennsylvania State House, Ben Franklin was supposedly accosted by a grand Philadelphia belle.

Legend claims she asked old Ben whether the assembled had bequeathed the people a monarchy – or a republic.