END_OF_DOCUMENT_TOKEN_TO_BE_REPLACED

This is not the path to prosperity...

THREE YEARS BACK, Australia's Wayne Swan, the best treasurer in the world, described the then 3% level of official interest rates as '50-year emergency lows'. Now we're approaching these levels again. Is the long emergency back? asks Greg Canavan for the Daily Reckoning Australia.

Indeed it is. Not that it really went anywhere in the first place. It just took a step back while Australia absorbed the impact of China's historic credit boom...which is now clearly in its final stages.

And what happens when the China tide goes out? As Warren Buffett says, we get to see who's swimming naked. Judging from the recent data, Australia is starkers. We'll go into more detail on that in a moment.

But first, let's talk about interest rates...because in the absence of any footy or cricket, talking about the manipulated cost of credit in this country is the momentary national sport.

Lower rates are good for house prices, home builders, retailers, property developers, investors (actually, speculators) and bankers. They're decidedly BAD for savers, but given there is no 'Savers Association of Australia' lobby group, you'll barely hear a whisper of complaint from them.

Besides, saving is for losers. Growth is all about consumption. That's why the RBA cut rates. We need to consume more. Consumption is the path to wealth creation, not saving. The more you consume, the better off you'll be.

Of course that is how the world works according to Western central bankers and the world's best Treasurer. But it's a moronic, Keynesian, short term, self-interested, political-cycle view of how economics works to create wealth for society.

Just like in other parts of the world 'burdened' by zero or near-zero interest rates, lower rates in Australia are a sign of a structurally flawed economy. That most of the talk is about how interest rate cuts might ignite the property boom just goes to show how ignorant most economic commentary is today.

Falling interest rates won't boost the housing market. There's a nasty shock in the economic pipeline that will probably emerge early next year. In the meantime, let the property spruikers have their last hurrah.

While Australia's special interest groups rejoiced about a lower cost of credit, the Australian Bureau of Statistics (ABS) informed us that in the month of August, the nation consumed $2 billion more in goods and services than it produced. In addition to that, the ABS revised the July deficit lower to $1.5 billion.

Below is a little chart we grabbed from the ABS press release. The seasonally adjusted, grey line is the one to look at. As you can see, Australia plunged from a trade surplus to a deficit in November last year. This was on the back of the first drop in bulk commodity prices from crazy record highs. The more recent drop in iron ore and coal has just dragged the trade deficit deeper into the red.

The China tide is in the process of receding, and Australia has been nabbed skinny dipping.

A Deficit of Saving 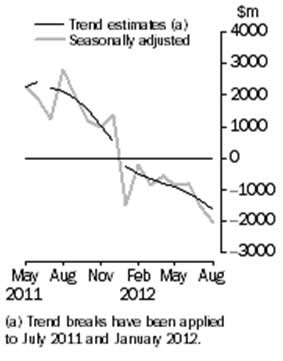 What's the big deal though? Australia is a world class consumer. We've been churning out trade deficits since the early 1970s. Isn't this just a reversion to the 'old normal'?

If you think the global financial system (the US Dollar standard system, the one that's been in effect since the, err, early 1970s) is sustainable, then you have nothing to worry about. Australia can continue to depend on the net producers of this world to finance our net consumption.

Because that's what a trade deficit actually means. When we consume more than we produce, we need foreigners to finance that excess consumption for us. They need to lend us the funds so we can buy that house, car, or bring in fabricated steel from Asia for one of those LNG projects that the boom spawned...and that may or may not justify the huge construction cost.

When you tally up all the trade deficits you get what's called the 'net international investment position'. Australia's 'position' at 30 June was a deficit of $880 billion, mostly made up of debt. When people lend you capital, they expect a return. The quarterly payment on the borrowed money is around $10 billion, or $40 billion a year.

Add in a circa $15 billion trade deficit (which will deteriorate further if we don't pull our head in on the consumption front) and you're looking at a $55 billion a year financing requirement. Given the size of our economy (around $1.3 trillion) that equates to a current account deficit of around 4.2%.

It's true that Australia has had worse 'banana republic' moments in the past. But after a long commodity boom, we're still looking at an unhealthy current account deficit. We clearly have little to show for the boom times...apart from a housing bubble.

That's right, the fruits of Australia's labor has gone into housing. This is not really great for promoting productivity growth. Poor productivity leads to rising prices. It's why inflation is a problem and will get worse if the RBA tries to boost consumption with more brainless interest rate cuts.

Check out this chart from the RBA's chart pack. It basically shows domestic inflation, or inflation of services that you can't 'trade' (i.e. you can't duck over to China for a quick haircut) against 'tradables' inflation.

It tells you that inflation of domestic services (stuff you can't really trade) is persistently high, while the benefit of a stronger Dollar has brought downward pressure on imports and therefore 'tradables' inflation. When you invest heavily in an asset that has no long lasting productivity benefits (housing) you tend to get inflation problems.

Australia has such a problem, but because we blend it with the lower price of imports, conventional wisdom is there is no real issue. 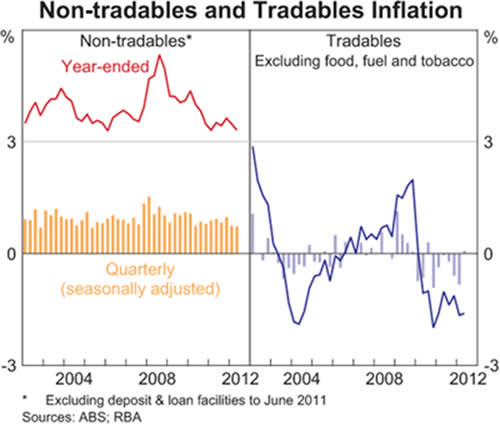 So we look to the RBA to lower the cost of credit and encourage more consumption. We expect foreigners to keep financing our excess consumption and standard of living, because that's the way it's always been.

But as we often say, this Dollar standard system that's been in existence since 1971 is getting old. Zero interest rates in most of the developed world are telling you that loud and clear. If you can't see the signs, you're either a politician or central banker.

The important issue for Australia will be how we handle the transition to a new system. How will we cope when foreign capital either goes home, or demands a higher return?