END_OF_DOCUMENT_TOKEN_TO_BE_REPLACED

What part will Gold Bullion play for investors as the "race to debase" speeds up...?

In the LAST TWO WEEKS we have seen the US Dollar move from $1.2751 to $1.3450 against the Euro, notes Julian Phillips of the GoldForecaster.com.

The Dollar has also fallen against the Pound, the Yen and the Swiss Franc. In response, the Japanese government via the Bank of Japan is weakening the Yen as we write this. The trade-weighted Dollar Index of its value against a basket of competitors has fallen to 0.79 (a 4% drop), and points to a further major drop still. The breakdown through support is critical and will incite arguments that the US itself going to weaken the Dollar via coming Quantitative Easing.

And meanwhile, the Gold Price is nudging the record price of $1300 and promising much more.

The argument from the US Treasury that China should let the Yuan rise is now losing weight in line with the weakening of the US Dollar. All eyes are on the Fed after the issue of its statement this week. These pointed downward to deflation for the economy, despite the general belief that the US still has a recovery underway. 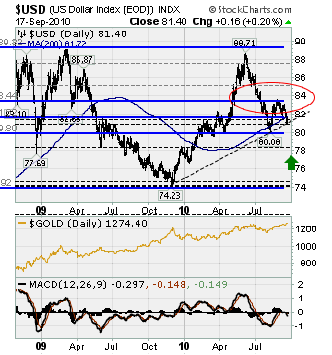 This is a major step forward for us in the gold and silver world. The Fed has indicated that deflation may have to be fought. If this is correct then the Quantitative Easing we have seen to date is more than inadequate. More than that, the Fed is aware it may have to inflate, to give the right financial environment for a 'real' recovery to take place. This means that the value of the Dollar both inside and outside the US will be lowered, in future. Markets are discounting deflation expectations right now. Once inflation appears, only then do we expect equity markets to rise, as the Dollar cheapens.

The boom-bust history of the last three decades is now over and we are moving to and into new territory for global economies. The new ground is dangerous, requiring and facing extreme economic and currency conditions. We doubt whether the tools in the Fed's hands are sufficient to cope with future situations. This is when government should step in, as President Roosevelt did in the 1930's with huge quantitative easing and heavy, ground-level, employment stimuli.

Unfortunately we are approaching a time when the US government will be emasculated with the Administration unable to appoint people to high places, let alone pass critical legislation to really boost the economy. Global foreign exchanges have been the first to reflect the true picture on the Dollar by sending it down through critical support levels.

As inflation (which may not be visible for another couple of months) debauches debt itself, repayment of debt will make it easier to repay. This could well propel the consumer from saving into spending.

Consumers will then turn to durables and other hard assets to protect their savings boosting the economy, but not in a good way (unless employment takes off to cope with the demand). It worked in the 1930s, but industrial production was boosted by a supportive Second World War effort.

No such future exists for us though. Manufacturing will only revive if protectionism is employed. In fact, the future appears fraught with potential changes on such a scale that a complete re-vamp of the global monetary system is needed. That can only happen once the global pecking order of nations has been re-worked. That won't happen without economic strife. We are really watching the rise of China and the decline of the US

In such an environment gold is the only common denominator of value, accepted globally.

As we saw in the huge gold/foreign currency swaps which the Bank of International Settlements conducted earlier this year gold can be harnessed to 'guarantee' international currency transactions. Having said this, the problem is, "How do you slot it into a fragmented global economy in such a way as to back currencies 'officially'...?" Not for one moment do we think Gold Bullion will be used in isolation as international money. It can only work with paper currencies, with international governmental approval, for it to be part of the global monetary system again.

As you can see from the above, the entire future global monetary game plan is changing. In the current issue of the Gold Forecaster you will see how we outline potential financial and currency crises that lie ahead.

Get the safest gold at the lowest prices by using BullionVault...