END_OF_DOCUMENT_TOKEN_TO_BE_REPLACED

A dispute over islands likely has a monetary dimension...

IT'S HARD to imagine Japan and China going to war over a couple of islands, writes Dan Denning for the Daily Reckoning Australia.

But then, devaluation makes for unhappy bedfellows. Nobody thought war between the European powers was likely in 1914 either. You put some well-armed warships in the same neighborhood and who knows what can happen?

Still, it seems unlikely two such large and mutually dependent trading partners would come to blows over unpopulated islands. This is probably a test to see how the US will react as China begins to flex its military muscles in the region. Around 37,000 US soldiers are stationed in Japan. Does the US back Japan as a regional power to counter-balance China? Or does it do nothing? The Chinese are probably keen to find out.

The fact of the matter is that the US is a declining economic power in the Pacific. That makes for an interesting strategic contest. How much longer can the US afford to deploy so many military assets in the region? Even if President Obama has signaled a 'strategic pivot' toward the Pacific, there is the small matter of American deficits. 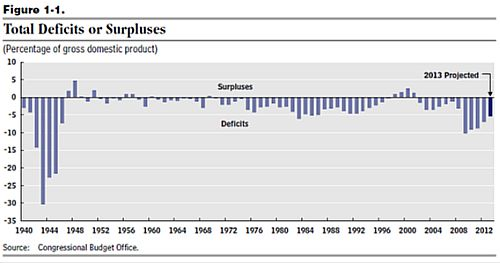 No discussion of Pacific power politics would be complete without a look at America's finances. They are not good. You know that's the case when an $845 billion annual deficit is presented as good news. Yet that's exactly how most people are spinning yesterday's report from the Congressional Budget Office (CBO).

In relative terms, the CBO's projected deficit for 2014 IS actually an improvement on four straight years of trillion Dollar federal deficits. But $845 billion is still a pretty big gap between what the government spends and takes in through taxes. CBO reckons that $85 billion in automatic spending cuts on March 1st (the sequester) plus higher taxes will reduce this year's deficit, while also slowing GDP growth down to 1.4%.

CBO goes on to say the deficits will shrink over the next three years to just $430 billion by 2015, or 2.5% of GDP. That's the level that most economists think is sustainable, which goes to show you that most economists are idiots. This entire process is an attempt to sustain and justify a government that never balances its budget.

But even the wonks and bureaucrats can see the grey wave on the horizon. CBO says that over the next ten years, 'Deficits are projected to increase later in the coming decade, however, because of the pressures of an aging population, rising health care costs, an expansion of federal subsidies for health insurance, and growing interest payments on federal debt.'

The ageing of the Western world is a fascinating subject. Our colleague Kris Sayce reckons this demographic trend could turn out to be the single-most important investment story of the next twenty years. As populations age and healthcare spending soars (public and private) a huge chunk of the economy will revolve around health. And where health is, technology can't be far behind. That's the angle Kris is taking.

For the here and now, though, Australia is affected by America's deficit disorder in two ways. First, the larger the US debt gets and the slower the US economy grows, the harder it will be for the US to spend half a trillion Dollars a year on defense. America might say it wants to be a Pacific power for the next 50 years. But everyone in the region - China, Japan, and the US - will know that the reality on the ground is different.

Secondly, everything you can say about America's rising health care costs can probably be said about Australia's as well. Can GDP grow fast enough to generate the tax revenues the government needs to support the welfare state? Can it do so when the resource boom is over? It's not going to be easy. Expect higher taxes.

And what will China do? It's America's largest creditor. Will it sit idly by as the US racks up unpayable debts, or debts that can only be paid in a depreciated currency? Probably not.

Gold imports from Hong Kong were up 94% to an all-time high last year, Bloomberg reports. The mainland wants more gold. Bloomberg calculates that the mainland imported 834.5 metric tonnes of gold in 2012. December 2012 was a record month, with imports of 114,405 kilograms.

It's like there's a currency war on, or something.

China hasn't passed India as the world's largest gold consumer yet. But at this rate, and with rising per capita incomes, it will. We suspect that by the next time China announces its official gold reserves, it will be pretty difficult to buy gold for less than US $2,000/ounce.

BullionVault: the safest gold at the lowest possible price...