END_OF_DOCUMENT_TOKEN_TO_BE_REPLACED

IF HISTORY looks back on this currency war as global economic conflagration, Melbourne and Sydney might be seen as 'open cities', writes Daily Reckoning Australia editor Dan Denning.

Australia is a non-combatant in the currency war. If the Japanese and the American and the Brazilians are duking it out in a race to the bottom with competitive currency devaluations, Australia and the Reserve Bank of Australia seem happy to remain neutral, the Australian Dollar strong and sun even stronger.

The only visible sign you'd notice that we're in the middle of a big contest is the ridiculously priced $38 buffet breakfast at the Crown Towers. The breakfast includes exactly one cup of average coffee. To be fair, the eggs (over easy) were cooked to order and the fruit was fresh. But you'd be hard pressed to find a more expensive breakfast anywhere in the English speaking world (Tokyo would probably be more expensive, and maybe Moscow).

But inflation in breakfast prices is far less irritating when it's accompanied by inflation in stock prices. And there's plenty of that lately. While we were engaged in meetings all day yesterday, the All Ordinaries attempted to consolidate their advance above the 4800 line. Will it hold? Well, the new inflation target by the Bank of Japan did not provide the expected support to stocks.

However, we've learned to never underestimate the bull-market creating power of irrational exuberance. When the animal spirits of money managers and punters turn frisky, you can get a rally that's seemingly all out of relation to the underlying economic reality. That's what the month of January looks like so far: a rally driven by enthusiasm rather than analysis.

Still, that's why they call it a market. You get a real market when people have different ideas about what something is worth, or different expectations about the future. If everybody agreed, then everything would always be perfectly priced and we'd have nothing to write about. We reckon there will be a lot to write about in 2013.

One of the stocks we like to look at when we're trying to get a sense of sentiment is Apple Inc. It's obviously not an Australian stock. But it is a kind of barometer about the willingness of investors to suspend disbelief. To believe in Apple as a market leader is to believe that innovation and the uptake of technology are stronger forces on the economy than decades of accumulated debt. 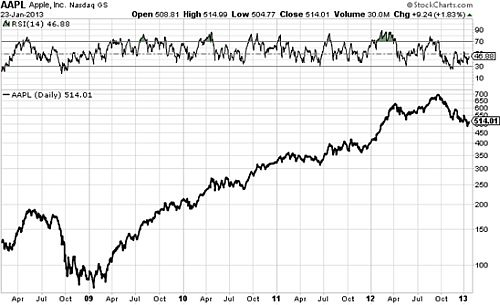 Now, even if we're right and Apple is 'rolling over' and heading lower, that doesn't mean the stock market won't make new highs. It could. But our point is that bull markets need leaders. Apple led the Fed-funded rally since 2009. What will lead the market from here? What story will investors believe in enough to get out of cash and back into stocks?

When we look around, there aren't any compelling stories capable of driving the stock market higher. There are compelling individual stories. But really, the direct of stocks as an asset class is more and more a function of investor confidence in central bank inflation targeting. And that obviously has nothing to do with earnings, price, or value.

It's a bright, sunshiny day. But sunshine is the best disinfectant, as the saying goes. The more we look, the more we see, and the more we see, the less we like what we're seeing. All this positiveness and enthusiasm feels familiar, and suspicious.

BullionVault: the safest gold at the lowest prices...